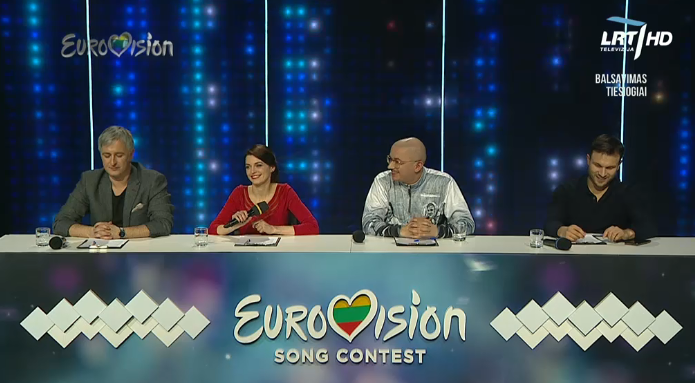 This article comes to us courtesy of Connor Terry; we’ll have his profile set up soon.

Tonight, the second wave of Eurovision hopefuls in Lithuania fought for the ticket to Lisbon. With the exception of their initial 1994 entry that was selected internally, Lithuania has used a national final to field all of their Eurovision entries. The show’s length has varied in size over the years, but this year the show will feature 7 heats, one semi-final, and the final show on March 11th.

Tonight’s show featured many returning artists such as Paula, Mia, and Adrius Petrauskas, but their fame did not promise them any favor with the judges.

The running order for tonight’s heat was determined prior to the show.

Eurovizijos Atranka utilizes a 50% jury vote, while the Lithuanian public carries the other 50% of the points via televoting. This mean that the jury’s points could save an entry that the public dislikes, or vice versa. Such was the case when the public vote saved Germantė’s entry in Heat 1 but Natalija failed to qualify despite earning 7 points from the judges.

After the jury and televote points were revealed, it was announced that Saulės Kliošas, Twosome, Paula, Elizabeth Olshey, Jouzas Martin, and Audrius Petrauskas would be advancing to the next round of the competition. Below are the combined point totals and placements.

Next week, Heat 3 of Eurovizijos Atranka will kick off, and the artists are expected to be announced in the next coming days.

What did #YOU think of tonight’s show? Did your favorites make it through to the next show? Share your thoughts with us on our forum, or join the discussion below and on social media @escYOUnited!