Home 2018 Ukraine: ‘Under the Ladder’ and Under the Mask! MELOVIN Scores ‘Masked Singer’ Victory 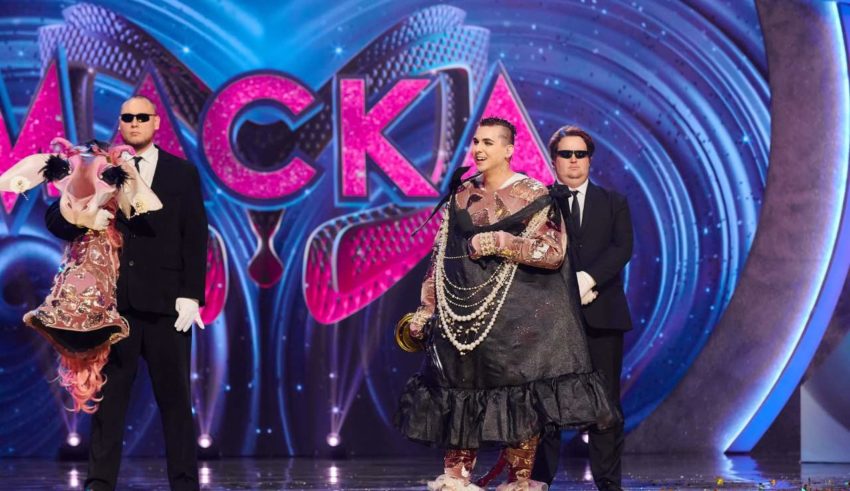 TRK Ukraine
MELOVIN clutches his 'Маска' trophy, while his giraffe head looks on.

Chalk up another victory for Team Eurovision!

Yesterday, on the final episode of Маска, Ukraine’s version of The Masked Singer, Giraffe was crowned the winner of the season and revealed to be Eurovision 2018 artist MELOVIN! The reveal shocked the judging panel, most of whom expected the unmasked celebrity to be a woman.

The “Under the Ladder” singer kept the panelists on the show guessing all season, demonstrating his unique ability to sing in completely different vocal registers from song-to-song. During the course of the season, MELOVIN performed songs by ABBA, Cher, Queen, and Adele, raising and lowering the pitch of his voice each week.

This trickery convinced at least one of the judges that the giraffe was female. As a bit, singer DZIDZIO began a lighthearted flirtation with the character, presenting the singer with roses and gifts as the season progressed. Needless to say, no one on the judging panel was more surprised by MELOVIN‘s unmasking moment than DZIDZIO.

It wasn’t all fun and games during MELOVIN‘s time on the show. He wasn’t afraid to go dark and moody, as shown with his episode 5 performance of “1944”, Jamala‘s mournful ballad that won Eurovision for Ukraine in 2016.

MELOVIN was the only former Eurovision participant competing on this season of Маска, but several faces would be recognizable to loyal fans of Vidbir, Ukraine’s national selection show. 5th place finisher Tiger AKA Serhiy Babkin competed at the 2018 edition with his song “Kriz tvoi ochi”, losing, as it happens, to MELOVIN. Also competing at Vidbir 2018, and ultimately placing 2nd, was Tayanna AKA Gorilla. The “Leyla” singer, who also finished in silver medal position at Vidbir 2017, was revealed in episode 8.

One episode DID feature a guest appearance from another Eurovision veteran. Kateryna Pavlenko AKA Tea Flower, lead vocalist of Eurovision 2021 act Go_A, opened episode 8 with a performance of Rihanna’s “Diamonds”.

Perhaps the most delightful reveal this season happened in episode 1. Accordion, the first celebrity unmasked, was Inna Bilokon, the actress most known for playing Verka Serduchka‘s mother. Andriy Danylko, Verka‘s male counterpart, is one of the show’s main judges, and watching his excited reaction to her unmasking is worth a watch.

Маска has been dominated by Eurovision artists in its two-season run. Zlata Ognevich AKA Sun, 3rd place finisher at the 2013 contest with the song “Gravity”, was the winner of the show’s first season.

At this point, which Eurovision artists do #YOU think WOULDN’T appear on ‘The Masked Singer’? Right now, I’m going to say Tornike Kipiani, but who knows? Give it a year.  Sound off in the comments below, in our forum, or on social media @ESCUnited.