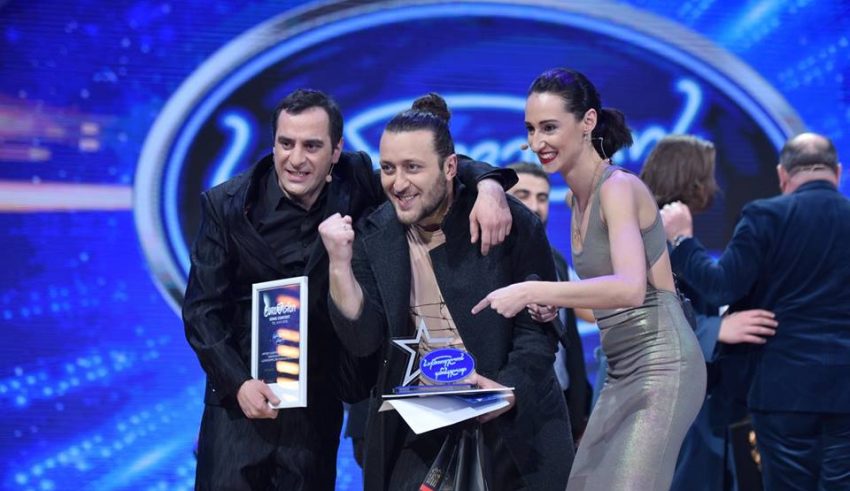 In a stunning beat-the-odds performance, Oto Nemsadze has won Georgian Idol and will represent Georgia at Eurovision 2019 in Tel Aviv, Israel.

Going into the Georgian Idol final, Liza Kalandadze was both the ESC United fan favorite and betting company favorite, but with an emotionally charged performance obliquely referencing the situation in South Ossetia and the discord that situation is causing in Georgia overall and in the Russian-occupied province, Oto upset the odds and will bring, as judge Zaza Shengalia puts it, his unique voice to Eurovision.

After all votes were tallied, Nemsadze won with 44% of the vote, while Liza Kalandadze earned 36%, Giorgi Nakashidze got 11%, and Giorgi Pruidze earned 9%. Additionally, Pruidze was presented with a scholarship to a music academy in France and a recording contract for an album by judge and Georgia Public Broadcaster’s (GBP) Media and Communications Director Tinatin Berdzenishvili.

Oto will perform “Sul ts’in iare,” composed by Roman Giorgadze and to be sung in Georgian in Tel Aviv. The song names were revealed earlier this week, along with the composer names, and some were wondering why both Oto and Nakashidze ended up with the same song, with many speculating that was setting Nakashidze, a great singer in his own right, up for a hiding. The songs were offered to each singer before hand, and the announcement of which artist would perform which song was simultaneous. Hence neither knew the other was picking the same song.

Nakashidze’s performance of “Sul ts’in iare” was the first up, and though an emotional and heart felt performance, the song seemed much better suited to bluesier and more traditional Oto than Nakashidze’s contemporary rock style, even though Nakashidze picked the song for the exact same reason (emotional resonance over a fractured nation).

Kalandadze performed 2nd with Levan Bashuruli’s “Red Sea” and Pruidze performed fourth with Tamar Bibulia’s “I Believe.” Though Pruidze finished 4th, his performance earned a standing ovation and glowing reviews from the judges who praised him on choosing a contemporary songwriter in Bibulia with a song that suited his voice, saying that his choice of the song was the best-suited of the four.

What do #YOU think about Oto’s shock win? Share your thoughts with us on our forum or join the discussion below and on social media!