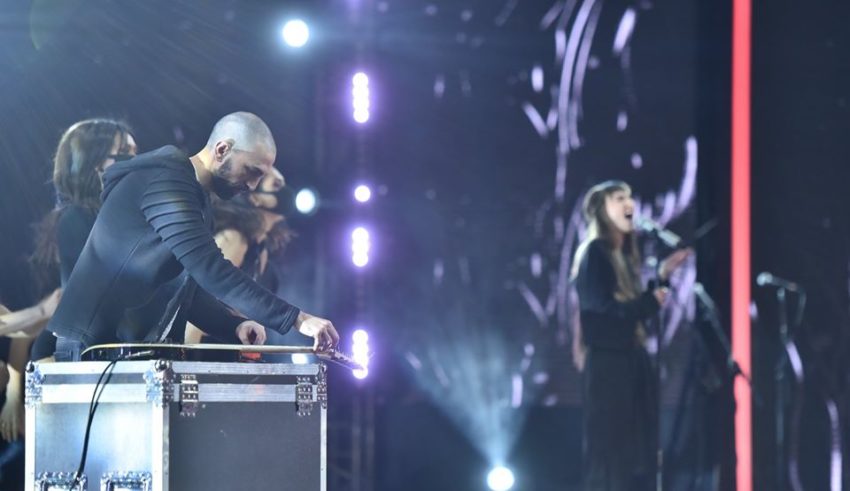 In tonight’s Georgian Idol semi-final Tornike Kipiani won for the fifth consecutive week, solidifying his position as the artist to beat at the grand final to be held on New Year’s Eve.

Tonight’s tour theme was duets featuring Georgian Idol’s finalists from last year and Georgia’s Junior Eurovision 2017 representative Grigol Kipshidze. Tornike deployed his duet partner, last year’s runner-up Liza Kalandadze, the best with Kalandadze delivering a wow inducing performance during their cover of The Prodigy’s “Breathe.” While Tornike’s own vocal performance was okay given his song choice, it’s his knack for delivering spectacle, such as his bridge performance on the guitar played on a table top, and use of his song partner’s strengths, that have earned him domination of the contest so far.

Unfortunately for Davit Rusadze, he left as quietly as he arrived. An oddity of the early rounds was the appearance of Rusadze on the named list of ten finalists given that they did not show an audition video and profile video for him, leading a few confused online to wonder where the guy who looks like Lion from the Netflix show Narcos came from.

Though his rendition of Coldplay’s “O (Fly On)” was delivered warmly with his duet partner Giorgi Pruidze and was appreciated by the judges, it was not enough as he came in fifth and last in the televote, leading to his elimination from the contest.

Though Tornike has dominated, he is a divisive figure online, with a large number of older viewers confused by his approach to the contest and his song choices. But Tornike has also won due largely to those who dislike him not rallying in unison behind an alternative, giving this year’s contest the appearance of a one horse race.

However, the singer best situated to steal the crown from Tornike is again Barbara Samkharadze, who again came in 2nd with the odd yet effective choice of performing Lizzo’s “Juice” with 14-year-old Grigol Kipshidze. Kipshidze was Georgia’s representative at Junior Eurovision 2017, where his “Voice of the Heart” was narrowly beaten by Russian winner Polina Bogusevich. Whereas Tornike used Kalandadze like a perfectly timed hand grenade, Samkharadze effectively used Kipshidze as a foil, with his lyrics being used as a call to which Samkharadze has a powerful response on Lizzo’s body positivity anthem.

Back in third, and a singer who needed to make a statement and did, was Tamar Kakalashvili. In a song full of fun and energy, she also made a strange editorial choice of using Georgia’s Eurovision 2019 representative and last year’s Georgian Idol winner Oto Nemsadze in a duet on Bruno Mars’s “Runaway Baby.” If Mars is a wolf in sheep’s clothing, Nemsadze is the wolf who don’t give a f%$#. But it worked, as if Joe Cocker was joining the song in both voice and attitude, and if the Gori Girls Choir member wanted to remind Georgia of her talents as a performer heading into the Final, she did so. Ladies and gentlemen, Queen Tamar is back.

Mariam Gogiberidze came in 4th with a duet with Giorgi  Nakashidze – who came in third in last year’s final – on the duet that is fast wearing out its welcome on talent shows worldwide: Lady Gaga and Bradley Cooper’s “Shallow” from “A Star is Born.”

The Semi-Final results are, with percentage of votes and songs embedded in the song title, are:

Hosted by Ruska Makashvili, Star of Georgia or Georgian Idol is the Caucasus nation’s version of the Idol franchise. It is the second straight year the show will serve as the selection method for Georgia’s representative and song at Eurovision 2020, to be held in May 2020 in Rotterdam, the Netherlands.

Heading into the final, who do #YOU think will triumph on New Year’s Eve? Do #YOU think Tornike Kipiani will be Georgia’s representative at Eurovision 2020, or do #YOU think another artist will upset the odds? Let us know in the comments below, on social media, or in our forum.