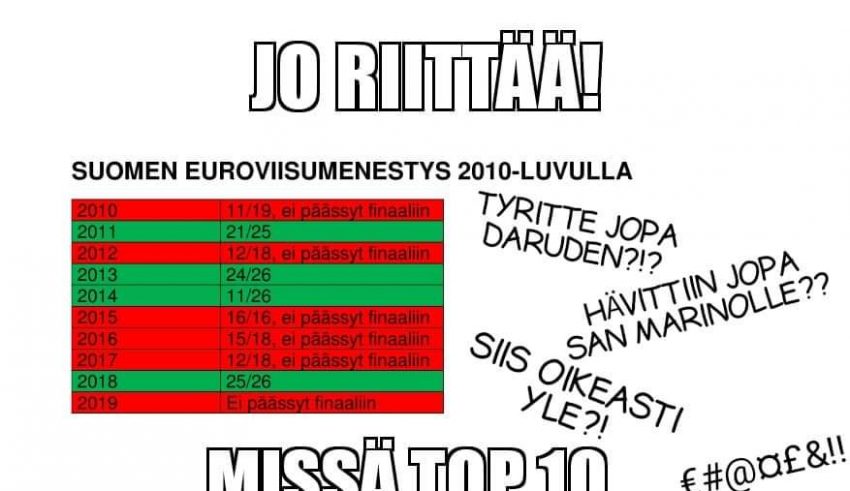 From Make Finland Again in Eurovision

The dust has settled, and fans of nations that did not qualify from Semi-Final 1 have had a chance to process the results and assess what went wrong (or why fans did not react favorably if the performances went right). And for Finnish fan Tony Latva, the blame for Finland’s non-qualification lies squarely on Finnish broadcaster Yleisradio Oy’s (Yle) shoulders.

In a petition sent to Yle CEO Merja Yla-Anttilla, Latva called for the replacement of Uuden Musiikin Kilpailu (UMK, meaning Contest for New Music) with a more open national final such as the song contests Finland had prior to 2012.

Darude and Sebastian Rejman’s non-qualification with “Look Away” will be a hard pill for Finnish fans to swallow, especially considering Darude’s name recognition from his famous 1999 hit “Sandstorm.” Last year, Saara Aalto’s 25th placed finish in the Grand Final felt harsh, especially since her entry “Monsters” found a sizeable following in the LGBT community and Aalto’s continuing career rise in the United Kingdom.

But Latva observes that Finland’s failures are due to UMK, where since 2012 a more restrictive national selection was put in place when finally, last year UMK internally selected the artist and the public voted on three song choices. That may have worked for the United Kingdom in the days of Matt Monro and Kathy Kirby, but not for Finland in 2018 and 2019.

Latva calls for a return to an older format where long term development of talent is seen as key to better results at Eurovision, a not unreasonable call considering Finland’s gradual development of metal music from a hinterland in the ’90s to the powerhouse it is today. Such coaching from professionals to up-and-comers would help revitalize Finland as a force at Eurovision, where their one victory in 2006 is one everyone remembers: Lordi’s “Hard Rock Hallelujah.”

At this time, Yle has not discussed how it will approach 2020 (Norway and Belarus have already rolled out their approach and changes to qualification for Eurovision 2020).

To join the discussion, you can go to Tony Latva’s Facebook group “Make Finland Great Again at Eurovision.”

Do #YOU think Yle should change direction for Eurovision 2020? Comment below, on social media, or in our forum.