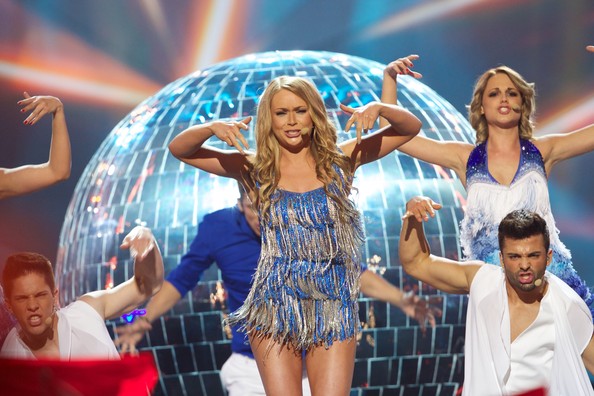 Hello, and welcome back to Eurovision This Decade. In this series, we as a team at ESC United are going through the amazing decade that was the 2010s, country by country, and picking out our favourites and sharing our views with you all. Today it’s Belarus’s turn. But before we take a look at Belarus, let’s have a look at the poll results for Azerbaijan!

It was a close contest, but this year’s entrant Chingiz edged into first with “Truth”, achieving 19% of the vote, ahead of Sabina Babayeva from 2012, who earned 18% for “When the Music Dies”. Third place with 16% was 2017’s Dihaj with “Skeletons”. Now, on to Belarus!

Belarus have competed in all ten contests this decade and they’ve not had much luck over the years; but they’ve certainly given us some memorable entries. Let’s take a quick look at their track record and then we’ll get into the rankings!

Performed 16th in the first semi final and qualified for the final in ninth place with 59 points. 3+2 then performed ninth in the grand final where they finished 24th with 18 points.

Performed 16th in the second semi final and failed to qualify for the final. Annastasiya came 14th on the night with 45 points.

Performed fifth in the second semi final and failed to qualify for the final, finishing in 16th place with just 35 points.

Performed 11th in the first semi final and qualified for the final in eighth place with 64 points. Alyona then performed eighth in the grand final where she finished in 16th place with 48 points.

Performed tenth in the second semi final and qualified for the final in fifth place with 87 points. Teo then performed second in the grand final and finished 16th with 43 points in total.

Performed 11th in the first semi final and failed to qualify for the final. Uzari and Maimuna came 12th on the night with 39 points.

Performed fifth in the second semi final and failed to qualify for the final, coming 12th with 84 points overall.

Performed 14th in the second semi final and qualified for the final in ninth place with 110 points. Naviband then performed third in the grand final where they came 17th in the end with 83 points.

Performed eighth in the first semi final and failed to qualify for the final finishing 16th with a total of 65 points.

Performed eighth in the first semi final and qualified for the final in tenth place with 122 points. ZENA then performed 19th in the grand final and finished 24th with a total of 31 points.

“Help You Fly” is one of the best produced tracks to come out of Belarus for the contest, and that means a lot from me because I really love Zena’s song from this past contest. But honestly this song was a whole package, an artist with an amazing voice, really unique staging, and really came alive on the stage in Stockholm. I really want to see IVAN back in the contest because I think he really energized the country in the contest overall.

Since I’ve been watching Eurovision (since 2008) Belarus has never been in my top 10 unfortunately, but the one that came the closest was Naviband in 2017. This is a really nice song; it has some great folk/pop elements and it was really nice seeing the Belarusian language in Eurovision for the first time. The band also have great chemistry which added to the performance. I was pleased when this made it to the grand final, I feel they deserved it!

This was one of the tougher countries to rank for me. Belarus have some very good songs that I definitely like. They have a lot of upbeat happy songs and my favourite may as well be the happiest Eurovision song there is. Naviband bring me so much joy with this song and you can’t help but smile every time you hear and see it.

Belarus are best when they serve their entry with a tongue in cheek, a wink and a smile, and their 2014 entry is the perfect example. Teo’s natural charisma, engaging performance and catchy, memorable track was ridiculed by many when it was chosen, but ultimately I felt vindicated when a lot of Europeans saw what I saw in this fun little track, and it remains my Belarusian highlight from this decade.

I feel like this is the obvious pick. Completely likable duo and what a great performance in Kyiv!

Our team have ranked all of Belarus’ entries and turned them into Eurovision style points. Let’s see who the ESC United favourite is for Belarus! With a four-point lead, it is Naviband who take our personal title for Belarus, with this year’s performance from ZENA coming second.

We’d love to know what #YOU think of Belarus’s entries and the series as a whole. Get in touch with us by commenting below, posting on our forum or visiting our social media pages.