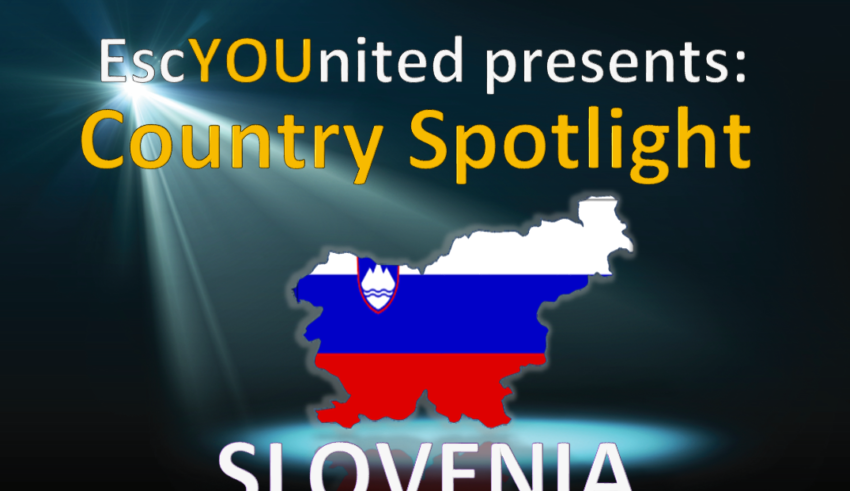 With their selection freshly unveiled, it is about time to discuss one of my all-time favourite countries. Note that I didn’t say “Eurovision countries”. Let us dive in, in medias res, because this Eurovision nation is one you can’t spell without the letters L – O – V – E : SLOVENIA.

Magic. Wonder. Grace. Pluck. These are all buzzwords that decribe what I believe to be Eurovision’s most underrated country. It is countries such as Slovenia that I started this series for and I’m chuffed I am able to shed light on their lowkey greatness. You may not care about what they have on offer now, but trust me: it’s a lot more than you may think.

Slovenia have always been the odd duck in the pond. A former Yugo nation that very often find themselves snubbed by their otherwise tight peers Serbia, Croatia and (when they compete) Bosnia-Herzegovina. A Balkanic nation which has a strong tendency towards rewarding western entries their slavic brothers in arms often ignore. (An example of this would be Slovenia giving 12 points to Denmark in 2010, 2011 and 2013, for reasons even I struggle to pinpoint.)

This is due to the position Slovenia have inside the playing field, which is, quite unique, to say the least. Eurovision votes have always been culturally motivated, especially after Eastern Europe joined the contest in the nineties and nillies. There’s nothing wrong with this, btw. We all grew up with  our own customs and are hard-wired to be more accepting towards music trends we have fond recollections of: As a Belgian of Bulgarian descent, I am strongly biased towards both Western and South-Slavic countries’ entries (particularly those of Belgium and Bulgaria), as they provide a sound I am familiar with and can relate to.

Naturally, it is Slovenia’s geographical position which thrusted them into this quaint little position. Situated between Croatia and Austria, the Slovene have developed a taste for pretty much every genre their competitors are ready to throw at them, with only a slight bias towards their slavic brethren and neighbours. They are far from picky and it shows in their annual voting tally.

However, it is the very same centralized position that has seemingly damned Slovenia into eternal also-ran status. You see, they are in that awkward position where they are everybody’s friend, but nobody’s best friend. Every friend circle has that one friend in it who fits in with the group, but isn’t in the group. Slovenia are that friend, counting as both balkanic and western, and as a result being treated as neither. Like we say in Flanders: they’re neither fish nor meat.

Even though Europe doesn’t always see their stars, Slovenia have stayed true to who they are. Ever since their lovely debut in Millstreet, they have continuously treated us with sweet non-conformity, a trend which they have continued to this very day. EMA is Eurovision’s Indie Haven, which is a title only Eesti Laul could contest, but with Tomi Rahula at the helm Estonia have now fully graduated from Scandi-Blandi School of Musical Confirmity, making EMA one again unique. 🙂

“Indie” is in itself a very wide umbrella term, but Slovenia’s repertoire is varied enough to earn the moniker. From Lea Sirk’s “Hvala Ne!” and Quartissimo’s “Love symphony” (highly experimental Avant Garde entries), over 1x Band’s “Tih deževen dan”,  and Tinkara’s “Round and round” (quiet entries with cult potential) to Maaraya’s “Here for you” and ZalaGasper’s “Sebi” (radio-friendly independent pop),  they are a land of many faces, none of which succumb to the infantile disease known as “Conformitis“. Even the few times Slovenia commit to a more mainstream path, such as Nusa Derenda’s “Energy”, they still managed to retain a certain edge to set them apart from the pack.

Slovenia’s unique angle is that they never play it safe and deliberately go against the grain. This daring approach to Eurovision has earned them a respectable fanbase. You may not know them. The average Slovenia fanboy is under thirty, introverted, conflict-averse and well-read. Not the type of person who would go on social media spew nonsense à la “OHMAHLERD WHAT A *BOP* YASS MAH QUEEN IS ON FLEEK SLAY” or whatever the extraverted nonwords of the 2020s are going to be. More importantly, the Sloveniangels support their suzerain nation with utter devotion and their contingent is growing.

In the previous editorial I’ve mentioned Bulgaria’s excellent marketing, which propelled them out of the swamps at lightning speed. I’ve almost spoken about CzechRep’s trendy revival. Slovenia are slowly, but steadily headed in the same direction. They have no natural enemies, but often struggle with being overlooked by the big names.

However, with every passing year Slovenia win more people over and I have noticed that once Slovenia has arrived on somebody’s radar as a country worth watching, they remain there as well. RTVSlo does a good job dealing with their growing fanbase: Last year’s EMA was very well produced (even if their attempts to rig it for RAIVEN completely failed, but that worked out for Slovenia as “KAOS” likely would have died in the semifinal), garnering quite a bit of hype from the fans and press, which is half the battle for Slovenia. This year’s EMA is headed in the same direction, teasing a musical smörgåsbord which will provide a variety of wholesome music.

Frankly, I couldn’t be more excited. My early EMA fave is easily Tinkara, whose 2014 entry I’m very fond of for reasons that take too much time to fully explain (basically: “Round and round” provided a lot of comfort in a rather bleak period of my life, is catchy as hell, qualified on my freakin’ birthday, innovated floordrop sorcery which is my favourite staging trope and Tinkara is an endearingly untelegenic orchestra dork – all of these things working together make for a cookie cutter Boris fave) and she’s is only the tip of the iceberg. Ana and Gaia look very promising, as does Ema Fresh finalist Astrid in Avantgarten. I have no doubts I’ll love INMATE’s entry as much as I love “Atma”. And this only includes the entrants I heard about before Friday’s announcement.

Slovenia might be a small nation, covering an area smaller than European Turkey with a smaller population than Paris, but they are bursting with talent. I brook no illusions about Slovenia’s winning chances. They won’t. Casual indifference will shiv their chances, but that’s fine, as they’ll win over more fans to their cause. And as a loyal footman in their indie army, I’m doing my part to ensure they get there.

Regardless of how well they’ll do, one thing is absolutely certain: their entry won’t be bland.

Next Up: In A special Christmas Update we’ll be taking a trip to a fairy land, far, far away.

Do #YOU agree with Boris? Did #YOU enjoy this editorial? What do #YOU think of Slovenia’s chances at the upcoming Eurovision? Let us know in the comments, on social media or on our forum!