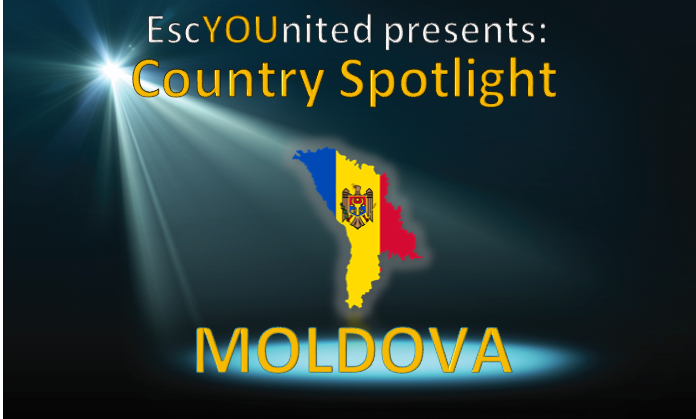 Happy New Year! As we have left the old decade to make place for the new, it’s time to look up the Equinox or whatever, but since we already did Bulgaria, I will instead turn the spotlight on a small, but stalward nation that made quite a splash in this decade. A country without actual winners, but several moral ones. Sit around and witness Europe’s warmest Rags-to-Riches tale: MOLDOVA.

But first, a disclaimer: this post is an editorial and therefore heavily prone towards subjectivity, as well as strong opinions and speculation. Anything stated beyond this point is the author’s personal opinion and does not necessarily represent the views of ESC United as a whole or its other editors.

There. I’ve made the obligatory mention of Epic Sax Guy. Everyone can now take a breath of relief as we start with our dissection.

However, if you believed we are done discussing memes, honey you were wrong — Sophie Ellis-Bextor, me. Moldova are pretty much Meme Central, dazzling Europe with showstopping staging ideas year after year after year. It’s become their brand and a very good one at that, as well. As such, this CS will be delightfully straight-forward for once.

What piques my interest however, is that this comes with a rather downtrodden social-economical status. Moldova is Europe’s poorest country based on GDP, has no discernible musical scene and has a notoriously hopeless national final – ‘O Melodie pentru Europa’ is arguably the worst national final on average (as long as VRT decide not to hold Eurosong) and often functions as a penal colony for Europe’s worst songwriters. (does that make OMPE the Australia of Eurovision national finals? hmmm. SBS mounting Kate Miller-Heidke on that pogo stick was a feat of Moldovan Staging brilliance, but I digress…)

At first glance Moldova are a country that you would expect to be a non-factor in pretty much every year… and yet, they aren’t. Not only have Moldova earned a reasonable qualification record since their début (2 out of 3 Moldovan entries reach the Grand Final on average – this is a better qualification rate than several countries, including Belgium, Bulgaria and the Netherlands) – whenever Moldova reach the final they usually do very well. Like, ‘left-hand-side of the scoreboard ‘type of well.

You know what I’m going to say next, but it bears typing out in a rather bold font: TRM are the best stagers in all of Eurovision. Of course one can easily scroll back up to Epic Sax Gay and say, “But Boris, it is because of their memes” but that is looking at it in reverse. Nobody  comes up with a stage concept merely to go viral after the show. Moldova go viral because what they do is f*ckin’ funny.  Post-show memes are a symptom of a good act but not the cause. To say Moldova only do well because “L O L MeMeZ” underrates the complexity of their success.

Memes also do not not explain why Moldova are able to churn out such great acts on a near-annual basis. Here’s where I make my bold claim: I believe Moldova’s poverty actually works in their favour for two reasons.

First, it forces TRM to manage their (often minimal) budget very efficiently, grafting out the hilarious, but low-cost on-stage gimmicks we all love and adore. This isn’t unique to Moldova, since countries such as Romania and San Marino often resort to similar strategies. However, neither of them ever went as all out as TRM have, because TVR don’t need to and SMRTV don’t dare to. Moldova literally cannot afford to send stand-alone good songs, and even if they did the lack of good English speakers would prove detrimental. Hence why “Hilarious Literalness” is their only reliable way to positively stand out in the tempest of flop pop we are subjected to every year.  It’s become Moldova’s calling card and over the year’s they’ve become experts at exploiting it.

Second, because they lack funds, Moldova generally find it easier to ensnare foreign investments. If some external musician, producer or composer would be interested in doing ESC, entering OMPE is generally the easiest way to get in. TRM are mercenaries, renting themselves out to the highest bidder, but this works very well for their chances. The average foreign composer in OMPE usually has the contacts or money required to facilitate Moldova’s staging spiel. Whoever wins the bid also bursts with the ambition and drive to make it work in ESC proper, even if taking the song at face value would seem to contradict this.

Take a look at some Moldovan entries in the past and how they have lived up to the above theorem:

Zdob si Zdub: The first time around, needed nothing more than a grandmother in traditional garb and a giant drum. Their second entry was much more expensive, but as the best-scoring entrant, it wouldn’t have been too difficult to find investors.
Arsenium? Had a world-wide hit, probably the second most famous Moldovan after Epic Sax Guy. Another easy investment.
Nelly Ciobanu? One of few Moldovan artists to have a career in music at the time, her entry was immensely cheap to produce, bring and sell.
Pasha Parfeny? At the time a very successful producer in his own right, but also the (former) patron of at least 3 other Moldovan acts (Aliona Moon, Sunstroke Project and DoReDoS)
Eduard Romanyuta? A Ukrainian who took his chance after his home nation withdrew from the competition, and won OMPE with a banana republic-like chunk of the televote.
Anna Odobescu? Openly admitted to a lack of funding, then found a helping hand in the ever opportunistic Ksenia Semenova, who saw another mediocre song she could hijack with her sand art.
DoReDoS? Launched by Pasha and backed by Kirkorov, who despite his other flaws is VERY supportive of his acts, both morally and financially.
Sunstroke? Ethnic Russians with contacts in the Russian and Romanian musical scenes and of course a huge, recognisable act in their own right.

Each of these entrants either possessed the resources TMR themselves were lacking (money, production value, experience) or otherwise managed to secure funding through external means.

So what does this mean for the future? Well, Moldova modified OMPE so that it mirrors Belarus’s selection format (open auditions, live show into a 100% jury decision), hopefully without immediately announcing how each juror voted (one of the weirdest existential experiences of last year’s NF season was ZENA winning the selection fewer than 10 minutes into the live show, which continued on as if any of the remaining 8 acts had a chance to beat her 69/70 monster score <3 wlu you corrupt weirdos). I have no real opinion on this, to be frank. The conditions under which Moldova do well (meme-able music, crowdfunding, the element of surprise) all still apply, regardless of the selection format.

Are Moldova going to win ESC? Well, no. I don’t doubt that TMR would absolutely love to win ESC (and make no mistake – Moldova don’t play to simply be there – they FIGHT for their qualification in every year, and that makes them a tremendously likable underdog in my eyes), but their current socio-economic situation simply doesn’t allow them to. The real killer for Moldova have always been the songs and as long as Moldova throw themselves at the mercy of foreign investors and flop composers, their destiny will remain to look bleak. As long as Moldova are unable to cultivate a certain sense of independence, (like they have with “Hey Mama” and “Boonika Bate Doba”), they won’t win. However, I have no doubts that, no matter how mundane their upcoming entries are musically, they will always be supported by a showstopping act. Once Moldova are ready to overthrow that mediocre yoke, they could snipe a shock win.

Next up: In the last Country Spotlight before national finals fully break loose, we’ll take a look at what it took one specific country to turn around their flop streak and win. Yes, I will be doing our dashing host nation: the Netherlands.

AUSTRALIA – NOTHING HOLDING THEM DOWN
AZERBAIJAN – A Wolf In Sheep’s Clothing
BELGIUM – Sometimes It Feels Like It’s Meant To Be Broken
BULGARIA – Brand New Old
CZECH REPUBLIC – Survival of the Hippest
NORWAY – the Northern Lights Are Dancing
POLAND – Anyone You Want To Be
SLOVENIA – Crouching Tigers, Hidden Treasures
SPAIN – Growing Spains

Do #YOU agree with Boris? Did #YOU enjoy this editorial? What do #YOU think of  Moldova’s chances at the upcoming Eurovision? Let us know in the comments, on social media or on our forum!