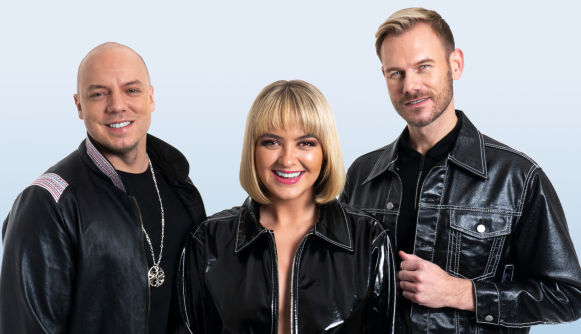 Brass trio Blåsemafian and Hazel won Melodi Grand Prix 2021 Semi-Final 1 and will progress to the Grand Final on February 20, 2021 with their entry “Let Loose.”

They prevailed in tonight’s final duel over Stina Talling, who along with the first duel eliminated Jorn and Beady Belle will have a chance to be saved by Norwegian fans to return to the contest in the Second Chance round on the weekend of February 13, 2021.

Blåsemafian is a popular horn trio, having made their name on Swedish television and providing backing  instrumentation on tracks for Marcus & Martinus, Jessie J and Tiesto. The trio is comprised of trumpeter Stig Espen Hundsnes, trombonist Sigurd Evensen, and saxophonist Jørgen Lund Karlsen. Vocals are provided by 22-year-old singer-songwriter Hazel. Though the young performer normally writes and performs songs on her own, she has decided to front Blåsemafian for Melodi Grand Prix 2021.

Tonight’s show kicked off with the random draw for the two preliminary duels, with Stina Talling’s “Elevate” being drawn first and pitted against Beady Belle’s “Playing with Fire,” with Talling going through to the final duel.

Electrojazz  trio Beady Belle has been around the Norwegian music scene since 1999, recording several records with Bugge Wesseltoft’s Jazzland Records (Wesseltoft was one of the 140 artists who signed the letter urging a boycott of Eurovision 2019 due to it being held in Israel). Beady Belle broke up in 2015, but since then vocalist and songwriter Beate S. Lech has carried on with bassist Marius Reksjø, who is also Lech’s husband, and drummer Erik Holm.

Their initial entry, “Spirit in the Sky,” was a sensation, winning the televote at Eurovision 2019 with 291 votes. However, the judges were not as ecstatic, only handing the group 40 votes and ending up in 6th place overall.

Jorn is primarily a power metal band that has been around since 2000, though their lead singer Jørn Lande is a respected elder statesman of that metal sub-genre, having being active since the late ’80s. Fans of the contest were surprised to see a power metal band show up at a Eurovision national selection, but it does appear Jorn had made some in-roads into the non-metal crowd, with ESC United founder Matt Friedrichs taking a liking to the band and putting them at the top of his Semi-Final 1 rankings.

As well as Jørn Lande himself, Jorn is comprised of guitarist Tore Moren, bassist Sid Ringsby, drummer Beata Polak, and keyboardist and producer Alessandro del Vecchio. “Faith Bloody Faith,” an unapologetically power metal anthem touching on classic  metal themes of organized religions and the wars they start, is written by Jorn with Age Sten Nilsen, who you may remember from WigWam, the glam metal band that came in 9th at Eurovision 2004.

Leading up to the final duel between Blåsemafian and Talling, another pre-qualified artist who debuted their entry yesterday, Tix performed “”Ut av mørket.” Born Andreas Haukeland on April 12, 1993 and known professionally as Tix, he has written songs for Flo Rida and Sage the Gemini, but has had hits in Norway on his own, including two Number Ones in “Kaller på deg” and “Karantene.”

Next week, January 23, 2021 at 10:50 CET, another four artists will battle in Semi-Final 2 and will feature a live performance of a pre-qualified act.