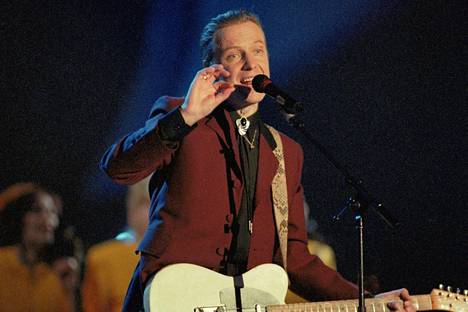 Experienced Finnish musician and performer Pave Maijanen, who represented his homeland in Eurovision 1992 in Malmö with “Yamma, yamma”, has died at the age of 70.

Maijanen performed solo and had a well-respected career, as well as being known for performing in various bands throughout the 1970s and 1980s, including Mielikummitus, The Royals, Rock’n’roll Band, Pepe & Paradise, Dingo and Hurriganes. He was also a producer and recently bassist for the Finnish band Wigwam (not to be confused with the glam rock band that represented Norway in 2005).

Pave represented Finland at the Eurovision Song Contest 1992 in Malmö, Sweden, with “Yamma, yamma”, an upbeat funky number. Unfortunately, Maijanen only gathered 4 points for the performance (1 from Israel and 3 from Yugoslavia), placing Finland last in the competition.

Maijanen continued to perform late into his life, including sell-out performances at the Helsinki Olympic Stadium and various ice hockey halls in the country. He was diagnosed with ALS in late 2018, which had developed to the point where he stopped performing and playing, with his last public appearance coming in October 2020.

According to Iltalehti, and despite his condition, he recently produced a photo exhibition at the Helsinki Kanneltalo. The exhibition featured his photographs from the last five years, with Maijanen heavily involved in photography since the 1970s.

It was confirmed today that the musician had died from the disease aged 70. Maijanen is the third Eurovision alumnus to sadly pass away in January 2021, following Carlos do Carmo and Liam Reilly.

The thoughts and condolences of ourselves at ESC United are with Pave’s family and close ones at this difficult time.