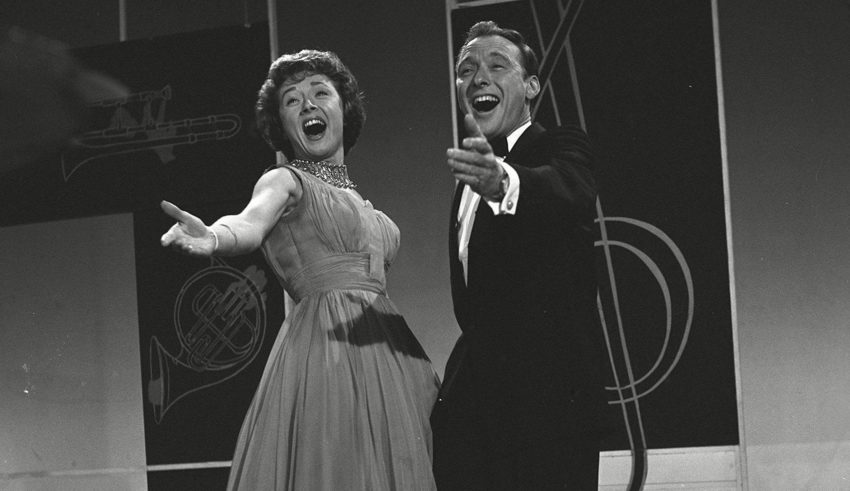 Pearl Carr and Teddy Johnson on The Morecambe & Wise show in 1962; Copyright: REX

Pearl Carr, one half of one of the most revered husband and wife singing acts in the United Kingdom, passed away at age 98 at her home at Brinsworth House, London, yesterday on Sunday, February 16, 2020.

In a post on Twitter, British light music entertainer and songwriter Bobby Crush announced that Carr had passed away.

Sad to report that my darling "Auntie Pearl", PEARL CARR, passed away peacefully this afternoon at the grand old age of 98. With her beloved husband, TEDDY JOHNSON, they were the most popular singing duo of the 1950's & 60's and my friends for 40+ years https://t.co/sZGqly1hDf

“Sad to report that my darling “Auntie Pearl”, PEARL CARR, passed away peacefully this afternoon at the grand old age of 98,” said Crush. “With her beloved husband, TEDDY JOHNSON, they were the most popular singing duo of the 1950’s & 60’s and my friends for 40+ years.”

Tributes began pouring in, with Co-Co and Bucks Fizz’s Cheryl Baker, and actors such as Jeffrey Holland and John Challis offering their thoughts and condolences on Carr’s passing.

“I didn’t want to do it, I was a solo singer, I didn’t do duets,” he said laughing, in an interview with eurovision.tv.

But the magic certainly wasn’t dark, as the couple not only toured the United Kingdom after their well-received appearance, they also began dating. They got married in 1955 and remained a couple until Johnson’s own passing on June 6, 2018.

They continued performing as solo acts or as parts of other groups, and Carr in particular had chart success with the Keynotes, who had two hits with Dave King with “Memories are made of this” (Number 5) and “You Can’t be true to two” (Number 11) in 1956.

Carr and Johnson performed regularly as a couple on light entertainment television, appearing on such shows as The Winifred Atwell Show (the ragtime pianist and entertainer whose “Poor People of Paris” remains the first and only Number 1 British single with a female instrumentalist), Big Night Out, and Blackpool Night Out.

The United Kingdom had only appeared at Eurovision once before in 1957 (coming in 7th with Patricia Bredin’s “All”), and after a year out in 1958, the British Broadcasting Corporation (BBC) approached the couple about entering the national selection for 1959.

“We went to the offices at Shepherd’s Bush in London where we selected the songs,” said Johnson. “In hindsight I was surprised they allowed a duo as there were no groups. There was one song that nobody wanted, it was called “Sing Little Birdie” and as soon as it played, Pearl and I looked at each other and agreed to do it. The rest is history!”

Carr and Johnson actually submitted a second entry called “That’s It, That’s Love,” but “Sing Little Birdie” made it to the final and won the Eurovision Song Contest British Final, beating out Lita Roza’s “This is my town” and Glen Mason’s “Suddenly.”

Carr and Johnson performed 10th (out of eleven acts) on the night, and came in a close second to Teddy Scholten’s “Een beetje,” the second time the Netherlands had won the contest in its short history.

Carr and Johnson tried again to enter, this time also submitting two songs to the National finals for Eurovision 1960 with “Pickin’ Petals” and “When the tide turns,” which made the national selection final. However, none other than Johnson’s own brother Bryan Johnson beat them with “Looking High, High, High,” and in another uncanny coincidence, he also came in second.

But Carr and Johnson continued to perform and do television appearances, and had another hit in 1963 with “How wonderful to know.”

Though chart-topping success eluded the couple after a very swift sea change in the tastes of popular music in the United Kingdom, they still toured and performed on television regularly.

After a joint appearance on the British documentary series This is your life in 1986, Carr and Johnson were again back in the spotlight and performed in a long run of the London West End musical “Follies” (Stephen Sondheim). After a lengthy run, Carr and Johnson retired in 1990, and eventually moved in together into Brinsworth House, a retirement home for British professional entertainers.

We at ESC United extend our condolences to Carr’s family and friends on the loss of a remarkable woman whose work and contribution to the Eurovision Song Contest will never be forgotten and whose unique collaboration with her husband will always be treasured.

Do #YOU think “Sing, Little Birdie” should have won Eurovision 1959? Outside of the contest, what memories of Carr do #YOU hold dear? Let us know in the comments below, on social media, or in our forum.