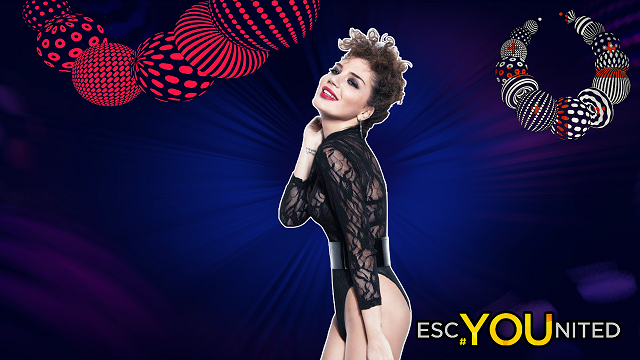 Robert – 10 Points
Beginning with a mysterious, soft opening, this closes with an ending more akin to a cry for war than a song. This entry is built wonderfully around its title “Keep the Faith” and uses it as a recurring motif to pull the song along to its intense and powerful climax. I adore power ballads as a general rule and this is a fantastic example of how to do it; strong vocalist taking centre stage whilst the music swells and rises as the song goes on. Tako punches out the notes, with the highlight being around three quarters of the way through the song where she stuns us all with her high note. The backing vocalists do their part too; punching the lyrics out to make sure we’re left in little doubt as to the strength of this incredible song.

Stefan – 10 Points
Now this is how a perfect ballad sounds! It grows and it grows and it bams! I have a feeling there will be some fire at the very end of the performance

Matt – 9 Points
Now that’s how you sing a song. Taco, or Tamara, is a fierce singer. This is a powerful ballad and with a mediocre singer would probably fade away. But Tamara basically says “Watch me” and boy, that woman can sing. It’s not an easy song to like and may take a few listen for people to truly appreciate it. Is it old-fashioned? Maybe a little but who says that’s a bad thing? It’s effective when it’s done around and this is a great example. I can see her on Stage in Kyiv already blowing everyone away leaving the viewers and juries speechless. I have high expectations, please don’t disappoint me Georgia

Ferdi – 9 Points
This seems to be disliked amongst most fans and honestly, it stings to see that. I freaking love this song. Isn’t it the perfect example of a dramatic power ballad? It starts out slow and tender, with a powerful chorus and then from the second verse on we have a really powerful entry on our hands. The loud instrumental in the back and Tamara’s powerful voice fit together perfectly. I hope she will keep the song like it is – I’ll be rooting for her

Calvin – 7 Points
The melodrama is strong with this one, with the melody and orchestrations very heavy-handed, occasionally a bit too much so, especially as the backing choir and the “We Will Rock You” beat come in at the end. However, Tamara mostly makes it work. She has a very powerful voice which delivers the song’s higher sections well. Keeping the verses high was a smart choice, as she seems a lot more comfortable with the vocal gymnastics of higher melodies. Overall, it’s a nice package thanks to the strength of her performance.

Zack – 6 Points
Many will accuse Georgia of being political with this entry, particularly if the staging in Kyiv is similar to that of the National Final. However, in reality, this is a song topic that has been overdone in Eurovision. My hope is that the staging focuses more on Tako’s powerhouse vocals via a timely and dramatic performance. Tako has the stage presence to take a common theme in Eurovision music and make it something special.

Nenad – 5 Points
Already seen it, cliche and politically coloured. This song is vocally sang perfectly, instrumental part matches the voice. Personally, it irritates me when a country sends a “STOP THE WAR” song. No matter if 200 million people watch your performance and you are willing to carry over the emotion if you are NOT ABLE TO. She does not sell it well. A huge plus she sings about world peace,  a huge minus for the performance.

Sean – 3 Points
Despite the fact it sounds like the theme tune from the Crystal Maze, I can never really remember much about Georgia’s efforts this year without listening again . She certainly has one of the best vocals in the entire contest which I’m sure could make this grow on me by May, but it’s not a stunning or brave entry in my mind’s eye.

Romeo – 3 Points
I don’t know whether Georgians were voting on the best song or biggest hair, but I am leaning towards the latter. This could surprise me and make the final, but I don’t think it deserves to make the final. It is a style we have heard 1000 times before in eurovision and this is not special enough to stand out.

Gerry – 2 Points
Where Armenia might suffer from being released so late, its neighbor Georgia, for me, suffers the opposite fate. Having been selected so early, I’m afraid it’s gotten a bit difficult to keep Georgia on my mind. Tamara – her nickname “Tako” might have been a bit too informal – has an amazing voice, and she can belt it out with the best of them. However, the song itself doesn’t have much staying power. The lyrics are uplifting but vague to the point of inefficacy, and the melody has a vaguely sinister tone to it that doesn’t exactly match the words. Sadly, I think it will take a lot more than just Tamara’s voice to get this out of the semifinals.

David – 2 Points
My opinion about this song is very simple, in general, I just dislike ballads, and that’s just how I am. I’ll be the first to even say, that Tamara indeed has a strong voice, but I’m just bored throughout the song. I can’t focus on the song, it doesn’t capture me at all, and there is just nothing in it for me. Hurricane to represent Serbia at Eurovision 2021