Home 2017 San Marino: Valentina & Jimmie has spoken to us ahead of Kyiv 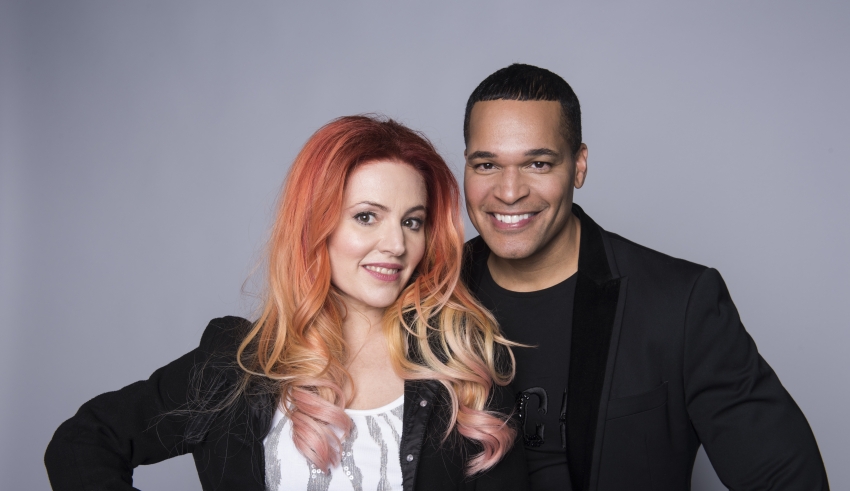 In less then a month our Eurovision Fever will be high. The 43 countries are expected to start the rehearsals in Kyiv where eventually one of them will win this year’s Eurovision Song Contest. San Marino, is the small nation in this competition, with a population of  30,000 people, whom managed to pass to final for the first time in 2014 with Valentina Monetta’s “Maybe”.  Valentina is back on the Eurovision stage for the 4th time but this time she is sharing this honour with Jimmie Wilson. Together they are going to present “Spirit of the Night”. It is amazing to note that their video, on the official Eurovision Song Contest youtube channel, has reached more then a million views.

Our editor, Mario Zupan has found time to chat with Valentina & Jimmie

First of all thank you for your time talking to us. How are you ? Can you introduce yourselves? What can you tell us about yourself?

Valentina: I’m a blessed woman full of passion for music, loving people and life, I’m full of positive energy believing in who I am and what I want to do, trying to give my best with love and compassion all the time.

Jimmie: Thank you for the opportunity to chat with you. I’m Jimmie Wilson, A singer and songwriter from Detroit Michigan (USA) now living in Frankfurt Germany. I’m a musical actor which is how I actually came to Europe on tour. I’ve starred in two musicals, Sisterella, which was produced by Michael Jackson and a musical called HOPE- The Obama Musical Story where I played Barack Obama.

I’m a full time singer that loves to sing. When I’m not singing, I like to workout at the gym and spend time with friends.

Valentina, can you tell us what changed your mind to come back to Eurovision?

My loving Eurovision fans, and the proposal to come back as a “black and white” duo with a dance song.

Valentina, you were on ESC few times so how you feel about it? You’ve met a lot of artists, would you like to work with some of them?

I’m feeling very lucky, there are many Eurovision artist with whom I would like to work since 2012, but now I’m very curious about the singer that represents Portugal this year.

Jimmie, We know that you come from America. How did you end up representing San Marino? Do you watch Eurovision Song Contest? If you do, who is your favourite winner?

Since moving from America to Germany, it’s hard not to follow ESC. It’s really big in Germany. I met the ESC Legendary producer Ralph Siegel at an event in Germany. He said something to me about a ‘project’ that he was looking for a singer for. I had no idea it was for the ESC. He kept everything top secret until I finally met Valentina in the recording studio. That’s how I began part of team San Marino. Interesting story, I later found out the San Marino has its largest community of Sammarinese living outside of San Marino are in Detroit. Somehow this connection must be fate. I think favorite winner was Loreen with ‘Euphoria’. But, now my favorite is Spirit of the Night . LOL

What message brings your song ” Spirit of the night”?

Valentina: This song is a hymn granting permission that all mankind should given to believe in one’s neighbour. It allows us go to the emotion and fan, dancing, singing, creating and loving, with no degrees of separation for celebrating diversity.

Jimmie: It’s message about fate and destiny. Two lost spirits finding each other.

Describe your song in three words.

Have you got any plans in the run up to the Grand Final in May?

Valentina: Continue working with positivity and sharing all energy that me and Jimmie can create together on stage

Jimmie: There are of course some pre-concerts in Tel Aviv, Amsterdam and Madrid. We will be performing at each of these events. That will be exciting. It will give of a chance to test the song in front of a live audience which is great preparation for the shows in Kiev.

Thanks for your time Valentina & Jimmie! To round off, do you have a message for your fans both in Europe and the rest of the world?

Valentina: Live life now, fully, learning from the pain and rejoicing and respecting our neighbours as an opportunity of evolution and love.

Jimmie: Let’s celebrate music and each other. Another famous singer from Detroit, Aretha Franklin sang a song called “Respect”, that’s what it’s really all about.

You can listen to Valentina’s & Jimmie’s entry on this link below :