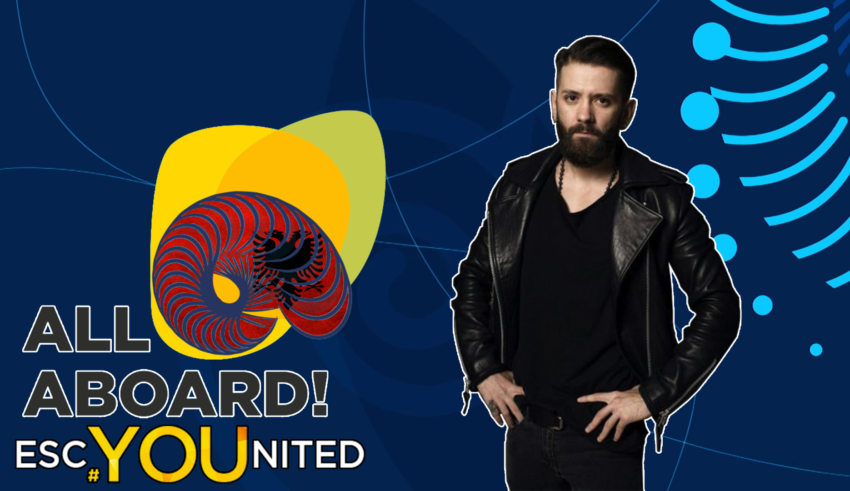 Before we move on to Albania, it’s time once again to wrap up the previous day’s entry. What did our lovely readers and social media think of the entry from (FYR) Macedonia? Here’s a quick selection…

r3gg13 (Forum) – “Macedonia this year sounds like a demo disc for all the possible versions of the song. Although well polished and nicely finished, it feels like a cop out when you try multiple genres in the same song. It’s like they couldn’t think of which version to send, so they mashed them all together. (because why not, it’s Eurovision). In my opinion, mixing multiple genres rarely adds value to songs- this song is no exception.”

Charly (Forum) – “I honestly lost count of how many times I played Lost and Found!”

Macedonia’s entry did favour well with the public in our poll, gaining 73 points from the televote, equalling Cyprus. We’ll see if this is enough to take the lead below. On to song five!

Robert – “Coming to review this, I got quite the shock that they had kept it in Albanian! I’m chuffed they did though as it adds to what is already an impressive package. It has power running through the entire song and a pulsating beat that really does not let you go. He hammers out the lyrics with serious passion and I am drawn along all the way. The choruses are magnificent as well, but the crowning glory is the final thirty seconds! One possible criticism is that we possibly need more of the chorus and less of the verses, but overall it is a great entry which really excites me!”

Christian – “I was so pleasantly surprised when I heard this track and was convinced I was listening to a song from Italy. Love this well written track that is well sung and nice with a real rock vocal that I really want to do well. A classic rock ballad and it works so well and has a great delivery too that I feel safe about it that it can be well delivered too.”

Connor – “This is the first entry we gained, and I have been listening to it non-stop since Fik 56, so that tells you how I feel about Eugent’s song Mall. As Salvador said last year, “Music isn’t fireworks, music is feeling.” Sure I don’t speak a lick of Albanian, but this song has made me smile for five months now, and that won’t change soon. The only disappointment is that they removed the high note, the ethereal moment of the whole song. Albanian revamp strikes again.”

Sean – “When Albania do rockier entries, they do them right. Eugent is possibly the voice of 2018 and the song has stood the test of time in my top 10 despite all of the challengers that followed. The three-minute version has done well to retain most of the magic but the extended version would be a real treat in Lisbon. A really solid and enjoyable journey of a track.”

Calvin – “There’s something too polished and safe about the production on this song. The instruments they choose demand something rougher and creative, but the way they’re used doesn’t deliver on that. For a while, that fully turned me off to the entry. But with repeated listens, I’ve found that, notwithstanding the lack of risk in the production, there is something a bit sentimental about the melody. It feels like something Eugent Bushpepa feels very sincerely, and that’s worth quite a bit.”

Matt – “This song to me is all about Eugent’s voice, I’m a big fan of his vocals. The song is itself is solid and it’s enjoyable. I’m a bit worried for this to become the liked by many but loved by few kinda entry that will not receive much support in Eurovision. That is exactly how I feel about it, I enjoy but I will most likely not vote for it.”

Zack – “Great singer. Boring song.  Does not do him justice.”

Stefan – “At first, I liked it, but then other songs start to come and Mall kept falling on my list. It is a bit too much, let’s say loud, but his performance keeps it cool. Unfortunately, I don’t see it in the final.”

David – “I’m missing a lot of things here, and one of them is a proper hook. I just struggle to keep this one on my mind, cause there is nothing that can properly capture my attention. Not a fan of the Albanian language in this one case, Eugent is a great singer, but that’s all that I’m left with, so… what else to say then?”

Efe – “Although I was at the boundary of crying for Albania last year for not qualifying to the final, this year I will be happy for them if they won’t qualify. This song is just not good at all! It’s so sad to see a country who possess the whole ethnicity and quality send a song which is just a simple rock song. I certainly do not think that this song does not even reflect Albania. Nevertheless, good luck…”

A decent jury score of 61 points for Albania this year, but will this set them up nicely for the televote? We shall see tomorrow…

Here are the current standings!

Now it’s over to #YOU – does Albania deserve more recognition? How do you feel about the three-minute version of the entry? Can Albania return to the final or is it another semi-final place for the Mediterranean nation? Let us know your thoughts with a short review on social media @escunited or on our forum HERE – and of course make sure to vote in our televoting poll below!

Tomorrow sees another early entry picked apart. Will Mikolas Josef’s “Lie to Me” earn praise from our panel? We review the Czech Republic on Saturday!

Share your thoughts on the Albanian entry and the “Expert” Panel so far on our forum HERE.