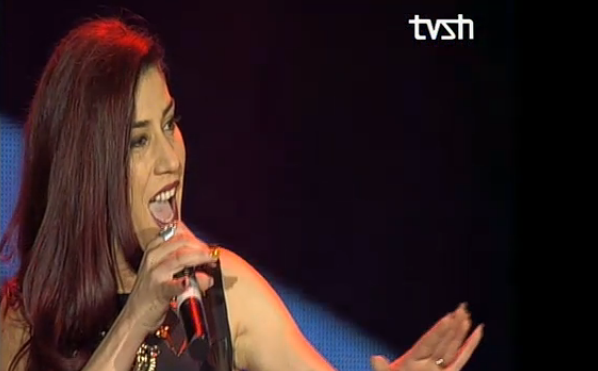 Last night, the first 12 performers took the stage in Albania’s Festivali i Këngës, and tonight, the other half will be performing. As with last night, the show can be viewed here http://rtsh.al/rtsh-live/RTSH-HD.html at 20:35 CET, and Kai & I will be on this page then to help you through the show and offer some commentary. We can’t wait, so see you then!

Calvin, 20:21: Ahoy hoy, everyone, and Merry FIKmas! Welcome to our live coverage of the second evening of Festivali i Këngës 55, Albania’s national final for Eurovision 2017. I’m once again joined by the one person who saw “Maybe” qualifying coming, Kai! Kai, who’re you most excited to see tonight?

Kai, 20:33: Goodness, ahoy there Calvin and everyone joining us for another night of our beloved Fik. Who am I most excited to see tonight? Hmmmmm I don’t know… perhaaaps……….. REZARTA SMAJA! I’m very excited and nervous to find out if Lindita Halimi can match the sheer awesome insanity of “S’të fal”. I think she was robbed at the 53rd contest. Albania made a big mistake not sending her with a song THAT much on fire. A lot to live up to with her comeback tonight and I hope her new song is just as bold.

Calvin, 20:40: Yeah, just a warning to everyone that if you don’t like Rezarta Smaja, this might be a looooooooong live blog for you. She hits it out of the park every year, and in a different way each time. I’m unbelievably excited to see how she will this time. The thing about Lindita is that her FiK songs before “S’të fal” were actually mostly ballads, so we’ll see if “S’të fal” was a new direction she’s taking or just one moment of fun.

Kai, 20:52: It would be great to see Albania go with another dance/electro pop song. We haven’t really had one from them since the great Juliana Pasha’s “It’s All About You”, which is still probably my favourite pop song ever sent to Eurovision. I think it may be time for another. Hey, maybe Rezarta could bring us something synthy? A song like her Kënga Magjike jam “Shpirt i lirë” would be just delicious.

Calvin, 20:57: Ooo, yes. I could see them going for an electro number this time around, especially one that fits nicely into the rest of the Festivali i Këngës canon. If neither Rezarta nor Lindita give us one, that could open the door for something like “Osiris” from yesterday to pull it off.

Calvin, 21:13: Elson Braha starts us off with “Edhe një herë.” It’s a fine operatic ballad with some interesting vocal tics at the climax. Didn’t really take off until the end, which may be a problem.

Kai, 21:14: First up some pop-opera from Elson Braha. “Edhe një herë” took me quite by surprise. From that first verse I wasn’t expecting the chorus to explode in such a grand and theatrical way. This is strong and passionately performed.

Calvin, 21:19: “Me ty” from Lorela is interesting. A very breathy vocal over some quite heavy instrumentation. Something about it felt melodically like the kind of ballad Malta will have in their NFs a lot.

Kai, 21:20: Unique vocals from Lorela on “Me ty”. I have a feeling that if this was in English it would annoy me more, as I don’t enjoy inflected voices and her tone was very forced. I’m feeling a bit indifferent at the moment towards the song which is pleasant but isn’t taking me anywhere.

Calvin, 21:23: “Më zgjo” from Tiri I actually quite liked. I really love that really subtle zipper-sounding synth in the background, and his performance put a lot of emotion in.

Kai, 21:25: Strong performance from Tiri on the pop rock ballad “Më zgjo”. Good reaction in the hall. This feels like a contender. It’s alright but i’m not in love with it.

Kai, 21:28: I’m going to cry. My favourite Eurovision song of all time. This song is buried deep in my heart and soul. Not only the greatest ESC song for me, but one of the greatest pieces of music ever. I can’t describe how much it means to me.

Calvin, 21:31: What a strange arrangement. It was kind of amazing how they translated it at all to oboe (?); where did the idea even come from?!

Kai, 21:32: It was stunning. Makes my heart ache each time I hear “Suus”. What a treat to experience it performed like that.

Calvin, 21:40: So Kai, which one of those two were you? I quite enjoyed our duet and the bouncy, energetic feel it had. Alright. Time to be totally neutral Rezarta fanboys. I’m so ready for this.

Kai, 21:44: What a time for the stream to give me problems. I pretty much missed all of the duet, and have managed to get it back with sound only for Rezarta. Calvin….. i’m….. I don’t think that was one of Rezarta Smaja’s bests, BY FAR. I’m disappointed. It lacked all the drama and punch of her previous entries. Her voice as usual was incredible, but geez, I didn’t think i’d be this let down tonight. I’ll need more time with “Pse prite gjatë”. I don’t hate it, but I love all her other songs, and that was far from being love at first listen.

Calvin, 21:48: I actually would break out the “L” word on first listen. It felt to me like if “Tomorrow I Go,” “Në Zemër,” and “Todas As Ruas Do Amor” were all put into a blender, which left me mostly confused and was such a mess that the word “disappointment” is beyond my thought capacity at the moment.

Also Dilan Reka, my least favorite from last FiK, was actually pretty good with “Mos Harro,” which was a surprise.

Calvin, 21:55: Who is this person, and when is he coming to Eurovision?

Calvin, 22:08: I disagree – actually thought it sounded rather pat and dated (hardly a bad thing, mind!), certainly much more than her other songs, which have quite modern productions. Feels like it’s missing some extra element, maybe a little more shouting in the chorus? Also yes, such fashion indeed.

Kai, 22:10: Woah, a very hip and cool song from XUXI. “Metropol” really got the party started. One of the more enjoyable songs from tonight, which so far is paling in comparison to the first evening of Fik.

Calvin, 22:12: I agree with Kai that last night ran circles around tonight so far but am less sure about “Metropol.” It felt a little cod reggae-ish to me, yet somehow easy to ignore.

Kai, 22:15: Man buns have arrived in Albania it seems. Luka & Serxhio Hajdini’s “Koha plaket” is ok, but a bit of a by the numbers kind of duet. Wasn’t particularly doing much for me.

Kai, 22:23: Another dollop of pop-opera tonight, this time from Classic Boys. “Dashuria për jetën” gets the job done, but I prefer Elson Braha’s popera.

Calvin, 22:27: As capitalization on the popularity of The Three Tenors goes, Classic Boys felt like the cream of the crop. That may have been a bit hammy, but I found it incredibly enjoyable. Maybe even my favorite of the night.

Kai, 22:35: Linda Rukaj on stage at the moment with her giant cello. Finally a song tonight I can really get behind. “Vija e lumit” is beautiful and incredibly pleasant. An interesting composition and even a bit of twangy guitar in there. Me likey a lot.

Calvin, 22:37: Agreed. That was so stylized and unique; I was really getting into that. It also bucked the formula for a lot of the FiK archetypes. Love it. Onto Lindita! As the only person in the universe who didn’t really love “S’të fal,” I wonder how this will go.

Kai, 22:40: Ok, she couldn’t match “S’të fal” but i’m unsure exactly what I think of that. “Botë” was a big ballad but felt a huge step down from her previous entry. Could Lindita Halimi make it this year to Eurovision? Hmmm maybe. The song is safer, but I just wish it was something more out there and zany. “S’të fal” was a breath of fresh air and truly robbed. I was hoping for revenge this year with more of the same from Lindita.

Calvin, 22:49: That was…okay. I found it rather unremarkable – some nice notes here and there, but nothing big, really. So Kai, what struck you here? I was impressed mostly by “Vija e lumit,” “Pse prite gjatë,” and “Dashuria për jetën.”

Kai, 23:02: I really liked Linda Rukaj and her giant cello…………… OH and the “Suus” sexy sax (even though it wasn’t sax) performance. That lounge rendition of my favourite Eurovision song ever was the clear highlight of the night. Otherwise it’s been quite a disappointing semi. I didn’t actively hate anything but nothing really was arousing my interest, unlike the previous night where there were several songs I really enjoyed.

Calvin, 23:13: No results yet – seems just to be interviews, aka “What Do You Mean Neither Of You Speak Albanian?!” Hour.