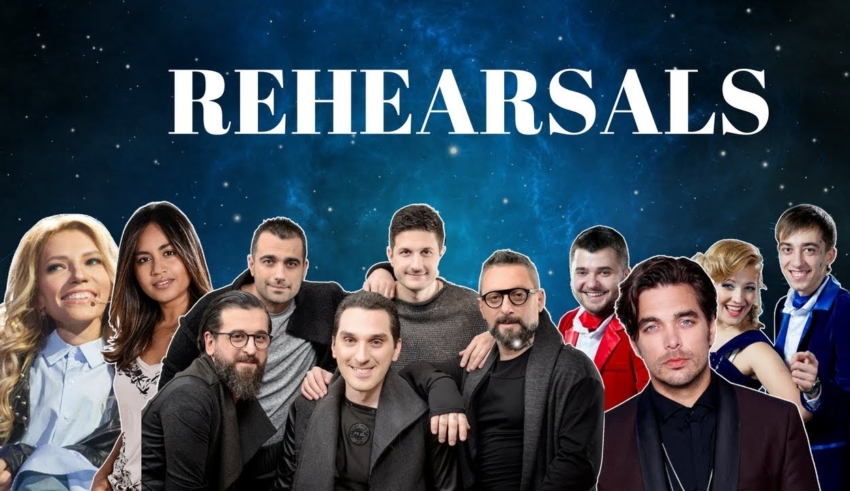 This morning’s session saw the songs between 6th and 12th in the running order from semi-final two rehearse, and what a morning it turned out to be! Did #YOU miss out on this morning’s session? Well there’s no need to worry, we have everything covered below, so check it out! Kicking off today’s rehearsal schedule is the second performance of Yulia Samoylova from Russia, who once again sits atop her mountain on the Eurovision stage. The projections are much brighter and varied today and the dancers give the performance some dynamism but again there is a lack of understanding in what idea the Russian delegation are trying to go for here. The vocals aren’t great in some parts but there is still an improvement overall from previous performances. Yulia has also changed her dress today, instead seemingly opting for a sky blue plain dress with white features. It will be borderline for Russia this year so it will be interesting to see how well this is received. This is honestly so much fun that it could almost be easy to forget about the song and vocals, but this will certainly be a televoting hit in this semi-final (perhaps the televoting winner?). The box on stage with the opening doors and hatches remains and the performers of DoReDos interact well with each other, the backing dancers and the door. It’s a cheeky, positive and fun stage show with colourful costumes and as far as the song goes, there is a lot of energy to match this. The vocals are much better today too, with the backing singers blending effectively with the leads. A really good rehearsal session for Moldova who I would pick as a dark horse to do very well… There has been a lot of talk about this stage performance, its appropriateness for the Eurovision stage and the crumping style of dance, and major respect to Waylon as he sticks to the same plan despite this added attention. And why should it change? While it takes a little getting used to originally it’s a very good performance and certainly adds the attitude and swagger that this country rock song needs to portray. Waylon’s vocal growls are strong again today and it’s a good performance from the Netherlands.

AUSTRALIA – Jessica Mauboy – We Got Love Australia’s clubby staging remains but it looks a lot better now, with the camera angles looking sharper and more creative this time. Jessica is still wearing the same dress as in previous rehearsals. Her vocals are a little strained in places and it seems like she has some kind of fatigue as a result of the rehearsals. Overall though the performance is infectiously happy, she will draw a lot from the fans in front of her and it’s this positive energy that Australia should be relying on. The boys from Georgia bring the elegance to this morning’s session with three solid runs. The vocal mixin is a little off in some places overall but it’s a very beautiful song and performance. In the third run we see ground smoke which accentuates the dreamy tones of the lead vocalists of Iriao and the big end note is greeted with a cascade of sparks which I love as it ends the performance on a big note. The camera angles have been slightly improved from the previous runs and Gromee and his crew do mix up their dance moves a little more this time. The energy is still there and the pink and light blue staging does look very good with the song. It’s still all down to the camera angles however for this one and the song’s eventual success will rely on the cuts matching the upbeat energy of the entry. I’m sure that regardless of any changes, this will look much much better once a live audience is put into the arena. Last up in this lengthy session is Malta’s Taboo, where they really throw everything in the Eurovision book at the stage. There are LED screens that portray various graphics, including leopards, hearts and various forms of shattering glass. One change from the first rehearsal is that there are now encouraging words written on the screen to meet up with the mental health themes. It’s a positive yet busy staging for Malta this year, my only worry being whether there are too many elements for the viewers to keep up with.