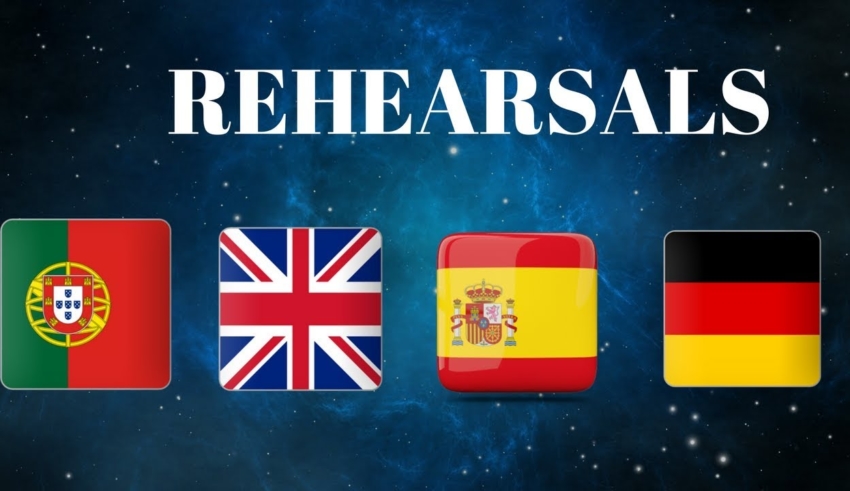 Yesterday’s last two sessions were exciting ones for the Eurovision community as it was the first chance we had to see the performances from this year’s pre-qualified finalists; our host nation Portugal and the Big 5 countries of United Kingdom, Spain, Germany, Italy and France. Did #YOU miss their rehearsals? Make sure to check out our live stream archives and reviews below, with the EBU exclusive clips thrown in for good measure! Cláudia steps out onto the Altice Arena stage with the honour of being Portugal’s first ever host entrant, and she delivered a suitably stylish and classy performance for her down-tempo pop song “O jardim”. The xx-esque song has an intimate staging to suit it, beginning with Pascoal performing in front of various old-style floodlights with some very nice wide-angle camera shots showing off the negative space. Angles are the big thing for SuRie this year, having used various lighting rigs in her performances so far, and this time is no different. She brings a long corridor of diamond-shaped lighting rigs which she performs in, walking through at various points of the song. Some of the opening shots are very classy and impressive for this one and it ends on a high note too but the camera work needs adjusting as there are some unusual shots, including one from behind at the end of the lighting rig. SuRie has decent vocals and this will come alive with a live audience so it’s a little difficult to judge it in this setting but there could be some more dramatic camera angles to highlight the positives in the song. I saw someone on our live stream suggest that this was quite an old-fashioned performance and it could be said to be true, but in this case it really works with the song. Alfred wears a maroon suit while Amaia wears a classy cream-coloured outfit. It’s a very simple staging with a lot of darkness intercepted by shimmers of golden light as the two young performers focus on each other as well as the cameras and audience. They have reduced the intimacy of the staging from Operación Triunfo but this is to the benefit of the song as it is a lot more inclusive to the viewing audience. Germany have brought only the second screen we have seen this year, and uses it to emotive effect to really hammer home the message behind the song. The screen is essentially used as a lyric video behind Michael, who is alone on stage in a casual outfit as in the national selection. The vocals are spot on in all of his runs and despite this being a first rehearsal we already feel that Michael is there with this one. The camera angles are really effective, there is a cool effect with replication of Schulte’s silhouette on the screen and the staging turns into red after the key change. A solid rehearsal from Germany who look to have put their recent poor form behind them this year. We were curious to see how Italy represented this song and its message on stage and now we know; subtitles in fifteen languages flash up on screen to great effect! Performance wise, Ermal and Fabrizio are performing the song very simply in the same way as at San Remo before they both move to the bridges at the side of the stage and then to the front catwalk in front of the audience. Throughout the song the lyrics pop up in various languages and fonts, with images of war-torn cities and refugee children in the typography. It’s very creative and artistic and it elicits a strong response from the press centre. The last new performance we will have this year comes from la France, with Madame Monsieur finally getting their opportunity on the Lisbon stage. There is a lot of hype for this song but, unlike the majority of countries this year, Madame Monsieur keep it very very simple with this performance. Some fog on the stage at the beginning and just simple spotlighting on the duo at the start looks very effective, and they then move towards the front of the stage as soft yellow and red lighting. At the “Mercy, Mercy” section, they both do exaggerated grabbing hand gestures to the audience which will of course elicit a response from the assembled crowd. I can imagine that this part will look very good in the grand final but my only concern is that there isn’t a very clear representation of the message for those unable to speak French.

What do #YOU think of the prequalifier rehearsals? Share your thoughts with us on our forum HERE or join the discussion below and on social media!