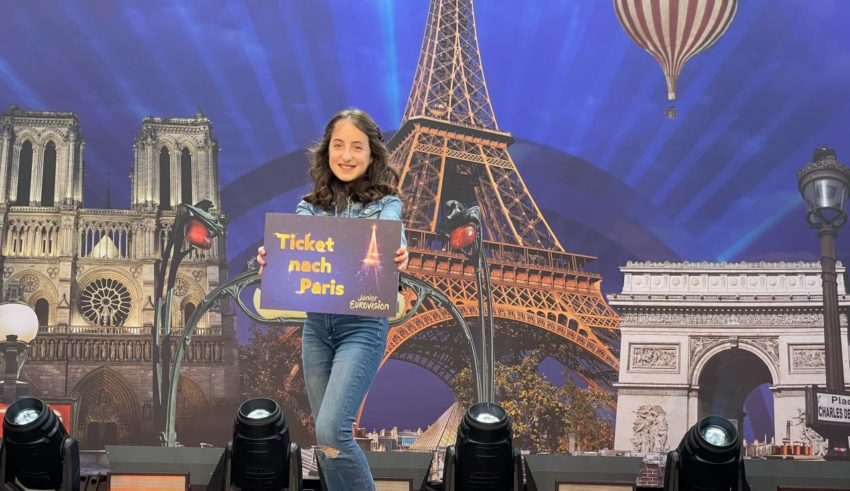 It’s 6 days to go until Junior Eurovision 2021, and we are counting down the 19 nations participating in Paris on Sunday, December 19, 2021.

Today we look at Germany, the last of the adult contest’s Big Five to make a debut at Junior Eurovision.

November 21, 2002. The European Broadcasting Union (EBU) announces a new version of The Eurovision Song Contest. With Children! The EBU announced 15 broadcasters had signed up, including Germany’s ARD/ZDF, for Junior Eurovision 2003. However, Germany and Slovakia pulled out. Germany planned an appearance at Junior Eurovision 2004, but Germany withdrew again.

Since then, Germany’s KiKA Channel, the children’s television arm of ARD, sent delegations to Junior Eurovision over the years to observe, but it was only until 2020 that they followed through with a national selection and made their official Junior Eurovision debut.

The debut did not go too well. Germany’s Susan Oseloff came in 12th and last with “Stronger with you.” Know who else came in last on their debut? Poland. Last on both their debut and sophomore attempts. And they ended up being the only JESC nation to win twice in a row. Hopefully Germany can come back strong like their neighbors to their East.

Five kids were selected to sing Eurovision cover songs, and on July 31, 2021, the public voted for their top three.

On September 10, 2021, each of the three finalists performed two of three songs provided by German broadcast network KiKA: “Imagine Us,” “Gut So,” and “Hausboot.”

In the end, Pauline Steinmuller prevailed, and the public chose “Imagine Us” as the song for her to sing in Paris.

Pauline Steinmüller was born on November 27, 2008, in Koblenz, Germany. She is also an avid drummer and dancer, and should a career as a singer not occur, she would love to fall back on being a dance teacher.

Upon winning her national final, Pauline said that “Imagine Us” is “about a dream world – and you can just ask for anything you want. And it’s just an incredibly beautiful song.”

Alex Henke, Torben Brüggemann, Ricardo Munoz, and Patrick Salmy are the writing and production team behind “Imagine Us.”

With the background out of the way, here is what we at ESC United think of Germany’s entry for Junior Eurovision 2021.

Boris – 8 – “One of my favourite archetypes in adult ESC is the “introverted young female band geek member” (examples: Zala Kralj, Blanche, Tinkara Kovac). This year the junior gods have decided to imprint the dork powers onto Pauline who bounces around completely oblivious to her song’s inherent lameness, prattling blithely on and on about imagination, and well, I’m not fully made of stone. There’s a lot of charm to be found when you witness a singer who is this much into their flawed song that you can’t help but hitch your emotions along for the ride, and Pauline makes for a great example of this archetype.”

Connor – 8 – “Right so when this first was selected I was like oh honey no….but then the revamp came out, and WOW they took this from a C+ to an A- quickly. I think that the song carries a really good message about coming together, protecting the planet, and of course fits into the theme of the contest. I think that Germany is really picking up momentum in the contest here, and they are starting to understand the assignment as well as those who have been in for years. My guilty pleasure of the contest right here.”

James – 6 – “The song is fine. It got better with the revamp. Germany paid attention after last year, and though I doubt they’ll win, I think they have a charming enough performer on an okay song to avoid the bottom spot. Not that they deserved last spot in 2020, by the way. But going forward in 2022, Germany’s going to need a song with a bit more pizzazz and originality if they’re going to join France and Spain as regulars in the top spots.”

Melanie – 6.5 – “When Pauline won her national final with this song, I thought that this was a sure last place in my ranking. However, Germany somehow knows how to revamp a song. This sounds so much better than the version she did in her national final. Pauline is really giving her all in the music video and it’s dangerously catchy. The song is good, but not amazing.The song has a great message, but somehow I’m not feeling it in her performance. Great effort from Germany and hopefully they can bring the message of the song across to the viewers.”

Roy – 7 – “A massive step up from last year! This song is way better catered towards the junior audience. Pauline’s voice fits perfectly to this jolly anthemic tune. I love how seamlessly they switch between German and English. A great example is right before the second chorus. Her accent makes ‘Brighter’ rhyme so perfectly lovely with ‘Weiter’, it is the biggest highlight of the song to me. I think Pauline has a great gift to sell this song to us with her smile alone as well. The song isn’t too difficult to sing either I feel. All in all quite great, but the big elephant in the room… The title and main words are nearly an exact copy of last year’s winner… Will the voters care about that, I don’t know, but I will deduct half a point for it!”

Stefan – 4.5 – “One thing I am sure regarding German language – It wasn’t made for singing. I am sorry to say but amongst the other 18 songs competing this year “Imagine us” just doesn’t stand out and I think it will be overlooked and forgotten by the viewers and juries.”

Tyler – 6.5 – “”Imagine Us” is a pretty competent peace and unity anthem that feels at home with Germany’s previous winner in Nicole back in the 80s. However, this is a fine song and not bad. It’s good, and Pauline seems to be putting her energy into bringing life into this song, and it’s very appreciated. I’m generally not a huge fan of these kinds of songs, but “Imagine Us” is still good even if I don’t think it’s a winner. It’s still a fun song though!”

William – 6 – “The #1 thing Germany has going for it this year is Pauline. She’s a super likeable performer, one of the most charismatic kids we have this year. She’s a dynamo. The song itself? The revamp was a HUGE upgrade, but I’m still not totally sold. It has grown on me, but, for a song called ‘Imagine’, I just wish there was a little more imagination in the songwriting. It’s a bit … ordinary? It just feels like Germany is behind the times at Junior Eurovision. Still, I’m rooting for Pauline to prove me wrong. I think she can do it.”

Pauline ends with an average of 6.5, which does put Germany in the “zone of indifference” that often endangers entries at Eurovision. But several reviewers noted marked improvements from 2020 in the song composition and production, and if the staging follows suit, we feel it’s less likely Germany gets bottom place again.

Seven countries in, here are our current rankings based on editor scores:

What do #YOU think of “Imagine Us”? Do #YOU think it will improve Germany’s standing considerably at JESC in 2021? Let us know in the comments below, in our forum, or in our social media.