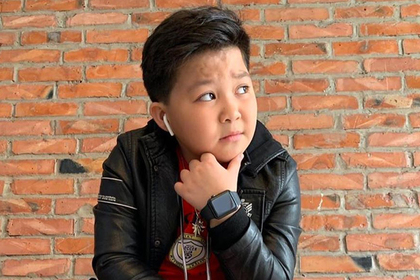 It’s 12 days to go until Junior Eurovision 2019, and we are counting down the 19 nations who are participating in Gliwice-Silesia on Sunday, November 24, 2019.

Next up we check out Kazakhstan, one of two debutantes from 2018.

This should be a quick entry – Kazakhstan debuted at Junior Eurovision in 2018, with Daneliya Tuleshova’s “Ozine Sen.” She came in 6th place with a critically acclaimed entry, and such was her success she went on to the United States to perform on The World’s Best, representing Kazakhstan with “seven octave wonder” Dimash Kudaibergen.

One of the kids that Daneliya had to dispatch in order to represent Kazakhstan was none other than this year’s entrant, Yerzhan Maxim. He finished 3nd in the 2018 national finals behind Daneliya and Jury favorite Meirzhan Zhidebai.

This year, Yerzhan did not have to join the growing list of kids who tried twice or more and failed at Junior Eurovision (those kids should get an award for their perseverance, maybe called the ZENA, as a recognition of kids who do not give up and keep trying until they succeed). Yerzhan was internally selected by Khabar Agency.

And Yerzhan Maxim will be the least controversial internal selection in Junior Eurovision history if you look at his resume – on top of his 2nd place at the 2018 national selection, Yerzhan also competed in 2017 at the San Remo Junior Festival, the 2016 Batumi Dolphin Festival (come to swim with the dolphins, stay to watch a kids’ singing show!) and the 2017 Slavianski Bazaar.

Born September 6, 2007, in Oral, Kazakhstan, Yerzhan has, on top of entering more festivals than I’ve had hot dinners, been a finalist on The Voice Kids of Russia. In Yerzhan, Kazakhstan has sent another formidable performer who should trouble the top half of the table, and regardless of result, like Daneliya we are more than likely going to see Yerzhan again in the future.

A string heavy power ballad, “Armanyńnan qalma” (“Don’t waste your dreams”) is “[a] song about dreams,” he told Junioreurovision.tv. “If you have difficulties, never lose hope. The whole world will open up for you If you have dreams.”

The song is composed by Kazakh folk musician and multi-instrumentalist Aldabergenov Daniyar. Joining him is writer and producer Timur Balymbetov and composer Khamit Shangaliyev.

This is what our editors had to say about this entry:

Boris – 7.5 – “Lol this schmaltzfest. Yes, this song is a bargain bin “Let it go” punctuated with random flute noises and hilarious OTT cheeseball greenscreen acting. Yes, I like this. A lot.”

Connor – 9 – “It’s official, I’m a Kazakh-stan. No? Okay well moving on then….This song screams vocal power, magic, beauty, and splendor. Yes it does rely heavily on his high notes and showing off vocally, but honestly I’m not that mad about it. It showcases elements of music from Kazakhstan (besides being vocally unstoppable) and gives it to us in the form of a power ballad. Also that stoned jacket is everything. This, paired with good staging, could be the most impactful song of the contest.”

Daniel – 7 – “This song sounds like an amalgam of different Disney songs and motifs. It does have several elements working simultaneously, at times seemingly random, but if done with proper staging, Kazakhstan can bring it all together.”

James – 9 – “To be frank, this power ballad is bonkers. There are more twists and turns in this than the Transcaucasian Highway, but only sprinklings of Kazakh instrumentation among the dominant strings and piano to not alienate European televoters, who tend to be more conservative in music attitudes toward their Eastern neighbors. A few seconds before the end there is a gasping sound in the background, as if to emphasize the energy required from young Yerzhan to pull this off. This will stand out in Gliwice, but will the kids latch onto this more than their grandparents? I suspect Kazakhstan will stump up the cash to make the staging something special (and probably oddball), so I would not bet against another decent Top Half finish here even if this is the song most likely to suffer from generational division in the televote.”

Melanie – 5 – “Yerzhan is just such a cutiepie. Every time when I watch his music video, I just want to pinch his cheeks. He can sing and have a great vocal range, but he’s giving a bland Disney/Christmas ballad. It’s very cute, but I don’t think people will vote for this. Next year Kazakhstan, I want more Kazakh elements in the song and less “Let it go” vibes.”

Roy – 6 – “Besides it being very musical theatre, I do not think that one can really hate on this song. The guy belts out incredible notes and the song has a decently epic feel throughout. The structure of the song is a bit odd and unpredictable, but it doesn’t bother me at all. Obviously this is not as good of an effort as last years song was, but I feel like it is still more than decent. I am really curious to see how they will stage this song and how the live-vocals will be, but it sounds quite promising. This may be a secret underdog that could snag more points than people expect and could maybe grab a higher placement than last year. It is mad to say that, but I could just see it happen. A decent song for me, nothing to get me really excited though.”

Sean – 6 – “This is sweet, if slightly ridiculous. I don’t mean that in a bad way, but Kazakhstan have cranked the Disney dial up to 11 on this entry, right down to the overdramatic vocals and fairytale music video. A caveat – I have not heard this live, so this could go one of two ways. If Yerzhan can nail this live, there’s no telling what could happen. This is a fantastic song to showcase a powerful vocal, so hopefully this is the case in a few weeks time!”

Stefan – 7 – “Junior Eurovision doesn’t deserve a song like this. Such a high production, this should go straight to Broadway. Yerzhan sings so good, but I am afraid this is the same case as Armenia – a bit too aggressive. Let’s wait for November 24th and see if the boy wonder will improve country’s debut result.”

Nine countries in, here are our current rankings by ESC United editor scores:

Kazakhstan lands in third in our chart so far, with a healthy average of just above 7, putting it firmly in the “good” territory. Some have misgivings about the unusual composition and yet similar chord progressions in parts to “Let it go” from Frozen, but others love the song because of it. All agree that if Yerzhan can pull off these vocals live, we could have a dark horse in the Junior Eurovision 2019 race.

What do #YOU think about “Armanynnan Qalma?” Do #YOU think this will top Kazakhstan’s 6th placed finish in 2018, or will stumble out of the gates? Let us know in the comments below, on social media, or in our forum.