Home 2018 Estonia: Sibyl Vane “We don’t have many songs written about love” 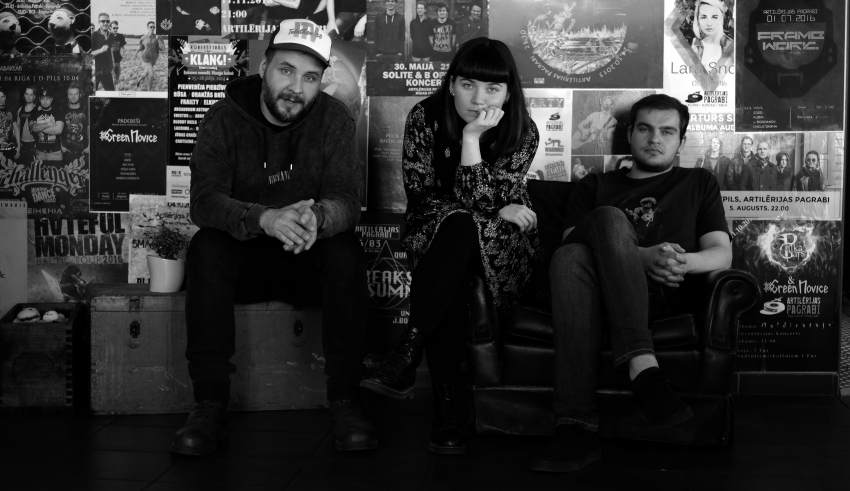 Another national selection kicks off tomorrow as Estonia’s now-famous Eesti Laul launches its 2018 season, and Mart Normet’s last in charge. Indie three-piece Sibyl Vane will be taking part in the first semi-final with “Thousand Words” as they hope to make it to the live final on March 3rd. We got to speak to the group below!

First of all thank you for your time talking to us. How are you? Can you introduce yourselves? What can you tell us about yourself?

We are really excited and busy working hard for our performance at the semifinals of Eesti Laul. But we enjoy every single second of it.

The three-piece Sibyl Vane was formed in the small coastal town of Pärnu in Estonia. Since day number one it has been the expression of the music and inner world of singing guitarist Helena. She comes up with the lyrics and main ideas for the songs which we arrange suitable to play with the band.

After winning a couple of competitions in first two years in Estonia, Sibyl Vane got signed to the Latvian record label I Love You and started to attract international music industry attention. Since then, we have successfully toured in the Baltics and Scandinavia. Our last self-titled album was released in spring 2017 and we are currently working on new one!

The song that you will be presenting for Eesti Laul is “Thousand Words”. What can you tell us about the song? What was the inspiration for the song, and did you write it specifically for Eesti Laul and Eurovision?

It’s all about the strongest emotion mankind has ever felt, also known as love. It’s a bit of an unconditional topic for us, because we don’t have many songs written about love. But it’s not a love song in the traditional way.

We actually started working on our third album and wrote the first song. It felt good, so we recorded it. It still felt good and we sent it to Eesti Laul. So it’s not a song specially written for the competition, but a true Sibyl Vane song that was picked amongst 258 songs that competed for the 20 places in semi-finals of Eesti Laul.

Eurovision is a great show. In Estonia it’s popular and people love to watch the show with comments coming from the radio where two comedians are commenting the show. That is super hilarious and a kind of tradition for Estonians. We try to watch it every year. At least, the part where Estonia competes.

Eesti Laul, the national contest to pick the Estonian song for the Eurovision Song Contest is even more popular. So Eesti Laul is a huge thing over here for the artists.

Another good thing is that since Estonia is so small we don’t have the distinct gap between the mainstream and alternative scene, which makes it possible for us and other more alternative sounding artists to enter this competition.

Apart from the Eurovision Song Contest, where would you dream to perform?

It has already has by the way. But first of all, we have to get selected for Eurovision!

Music found Helena if not vice versa when she was living in Japan as an elementary student in the local school. She got picked to sing in her school’s opera choir. And she had this small toy piano for the first experiments in writing songs.

Heiko started his first “band” when he was 13. It consisted of him and his 3 year-old niece. This “band” had only one recording and it was done on tape using two boomboxes.

Hendrik started playing drums as a young teenager and has graduated music school. So he has always known his path while others have searched for theirs.

They say that the artists of Iceland have their sound because of the environment where they live. Well when we were writing and recording our second album we recognized that our almost gray Eastern European environment influences more than Estonian artists tend to understand. So we made a video of this gray environment. You can see our “usual” day here:

By the way, that’s real ice there and real water on top of it. And that’s real fog that lasted for four weeks last winter. When we were filming the video there were some Latvian fishers that fell through the ice in the other part of this bay. And we didn’t actually see coastline any more. So even though we didn’t know how dangerous this shoot was, it gives a good impression of the world we daily live in.

We would like to thank Sibyl Vane for their time talking to us and wish them the best of luck with their participation in Eesti Laul this weekend!

What do #YOU think of Sibyl Vane’s entry? Share your thoughts with us on our forum HERE or join the discussion below and on social media!