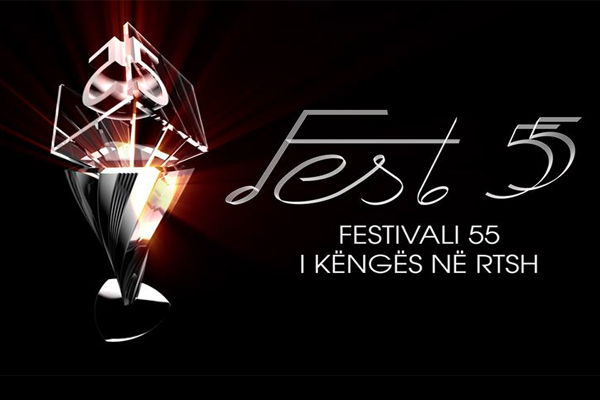 Good evening to all of our readers! As you might have read a while ago, we of ESC United will be hosting revotes for many national selection shows. These revotes will on one hand consist of reviews and votes from a few of our writers, while forum members and visitors may vote in a poll to simulate a televoting segment. Tonight, we bring you reviews – written by Kai, Calvin and Ferdi – of the first 8 songs from Festivali i Kengës! Tomorrow, you will get the remaining 6 reviews and the results – but for now, enjoy these reviews!

Kai: Franc and his red sparkly jacket managed to charm me during the first semi final. This upbeat little number moves with a delightfully goofy urgency to it. It brings a smile to my face.

Ferdi: Wow! This really is something daring and different. Franc looks comfortable and relaxed on the stage and brings the song very well, with amazing vocals. The song itself is very, very pleasant to listen to as Franc lifts up the spirit in the arena with his upbeat melody, supported by his on-stage accordion player. I think that this would have really taken the European audience by storm, and that this could very well have given Albania a shot to get back into the final!

Calvin: Many of Franc’s other songs are incredibly difficult sells that he finds something in, and this is no exception. The rhythm is very unconventional and constantly changing, and he delivers it with a “Monster Mash”-style uncanny that I find quite appealing.

Kai: Admittedly an interesting voice. I’ve never heard vocals of this style in Albanian. I know for a fact though that if this was performed in English I wouldn’t like it. I’m put off by inflected, breathy tones. The song itself is not particularly special, and it’s Lorela herself that’s adding something to it. It’s just a shame what she’s adding isn’t working for me, but I can certainly see it appealing to others.

Ferdi: The background, music and Lorela’s way of singing make this feel like a very happy and cute song. Let’s start with the instrumental; the orchestra is really doing its work here for me! I love the violins in the background, and the instrumental part two-thirds into the song gives me the will to write these reviews. As opposed to Kai, I’m actually loving Lorela’s vocals here. I think they quite fit the song, which makes me feel, as I mentioned, happy and upbeat.

Calvin: There’s something about this song that’s rather pretty, with a nice chorus that descends melodically, always a fun twist that adds a hint of sweetness to the song. Her vocals could serve to be a bit clearer, as that would make the song feel fuller in its sound; as it is, she gets washed out by the orchestra a little.

Kai: The most powerful song in this selection. If Polo sounded that good when visibly unwell, just imagine what she’s going to be like when she’s feeling 100%. It was rough and almost difficult to watch but I keep going back to the song, and i’m slayed each time. This is super hot and I think one to watch in the final, if she can recover from whatever it was that was holding her back in the first semi. A beast could be unleashed cause that’s one heck of a voice. Worth mentioning also was that eye-catching fashion we got to enjoy, courtesy of Polo during her first performance. She’s bringing beige back on trend this season.

Ferdi: I love me some good power ballad and well, Xhesika delivered. The song starts out slow – but not too slow, like in Këtu – and explodes at the chorus. BAM! Said chorus feels like the chorus of a rock song, mixed with some beautiful instruments such as violins. I’m not too convinced by Xhesika’s stage presence nor voice, but my problems with these two might be covered up by the fact that Xhesika was apparently ill.

Calvin: My favorite here, improved, I think, by her illness. She performs with incredible intensity, and her voice reminds me of the incredibly soulful divas who dominated the airwaves in the 70s. The expressions she gives are deeply emotional and hit home the song’s themes very nicely. I’m especially in love with the moment near the end where a high note goes into her throat, as though it were a scream. It’s a compelling and almost frightening moment.

Kai: A groovy and rather hip number. The song itself is a fun, uptempo party number, and I think I rather like it. It’s catchy. It would be a hoot at Eurovision, perhaps not exactly for the right reasons, but I enjoy it.

Ferdi: At first, this didn’t impress me at all, but everything got way better after the first minute! I thought Albania was showing us some elder guy desperately trying to fit in with the youngsters – to no avail. But in the end, Xuxi gives us a very hip and ultra-catchy song which I will probably be humming for days. Both his voice and the instrumental here are more than pleasant!

Calvin: For whatever reason, this song just isn’t really doing it for me. It kind of comes and goes without making a serious impression, which is strange for such a loud and dissonant piece as this one. The singer adds some charm, but mostly in staging details.

Kai: A chirpy and upbeat little number but this one irritates me quite a bit. It’s soulful and well performed but I find it difficult to get through.

Ferdi: Well, this is quite a happy song indeed, but not just in a good way. Let’s start with the singing here: when watching the live performance, I’m not sure whether there is a sound problem or if these ladies don’t know how to properly use their microphone. The flashy background isn’t something I’m that fond of, either.

Calvin: First, the good. Their voices complement each other nicely, and the two of them also work onstage well very nicely as a pair. Alas, they get washed out somewhat by the orchestra, and the really lovely melody gets lost in an overly stylized performance.

Kai: This is the song I wish Lindita was given. Possibly one of the most enjoyable pieces here, but there are artist problems holding it back. It’s a big, uplifting pop number, and much like Lindita’s “S’të fal”, the orchestra here is making pop really exciting and fresh. Whilst Dilan gets through it, the vocals are not up to scratch (or at least to my liking), and it’s spoiling my overall enjoyment somewhat. Great song but could have done with a stronger artist.

Ferdi: Wow! I’m impressed by the orchestra here. This song has a great instrumental, really. It lifts me up –  and does so better than many others here – and it’s actually quite catchy. I’m however not really convinced by the vocals. As Kai pointed out – Lindita or Rezarta could have sung this better, I think.

Calvin: I can’t say I came in with massive expectations knowing the artist, but this song is really quite captivating and well-delivered. From the first moment it started, it had my attention, and I made an emotional connection to it from the beginning, which is difficult and rare for a pop number. Not only was the song itself really well-produced, but he’s a perfect match for it, delivering a confident and steady performance that keeps up with the rhythm really well. The hype was briefly shifting to this as a winner, and I was fine with that while it lasted.

Kai: After strong initial disappointment with this one, I gave it another chance or two… or five and it’s really starting to grow on me. Of course it doesn’t match the sheer insanity and butt kickery of “S’të fal”. Lindita didn’t even try which is what made me sad. This sounds like something made to win Festivali i Këngës. It’s big, powerful, but also somewhat restrained (at least for Lindita’s standards). Her vocals are on point and the song has build to it. It doesn’t hand you everything on a plate. You need patience, and i’d say the pay off is worth it. There are some interesting melodic twists before the explosive final chorus to hold attention. This is quality and has proved itself a grower.

Ferdi: This starts out as a slow and beautiful ballad. Lindita’s vocals are nice, but this start doesn’t impress me at all. Luckily, this changes after a minute, as we see a tempo change and Lindita starts showing off some great vocals. As the song keeps getting louder and faster, it really turns into an epic power ballad. The orchestra sounds lovely, but Lindita’s vocals take the crown here. A more than deserving winner, I would say!

Calvin: As the only person on earth who wasn’t head over heels for “S’të fal,” this is actually quite alright, especially her performance on it. What I did like about “S’të fal” were the vocal improvisations she made during its semifinal performance, and while it’d be nice to have some of those here, she does provide a very clean delivery that works nicely for the song. Certainly a worthy winner. Just wishing it had a bigger climax – hopefully, the revamp will go larger rather than smaller with the song’s production, unlike 2014 and 2016, and that problem will be fixed.

Kai: A feisty synth-rock song from Flaka. This is well performed but pales in comparison to some of her rivals here. The most interesting part of this piece I think are the synths. I like it but after several listens I find myself still not quite sure just how much. It interests me but at the same time I think I should have warmed to it properly by now.

Ferdi: “Osiris” sounds quite nice actually, and I love the little synth-thingies (I think?) playing along in the chorus, alongside the orchestra. Furthermore, the song doesn’t really stand out that much, although Flaka’s vocals sound very nice, especially combined with her backings.

Calvin: For a while I had this as my favorite. It reminds me of the deeply emotional and loud electronic numbers of Dawn Richard. I love everything about “Osiris,” from the commitment of the performance to the well-crafted full-sounding production. I’m also surprised people didn’t take to this more.

Did you agree with our reviews? Who do you hope will win? Check back with us tomorrow as we give you the results of this revote, and start with the next one!