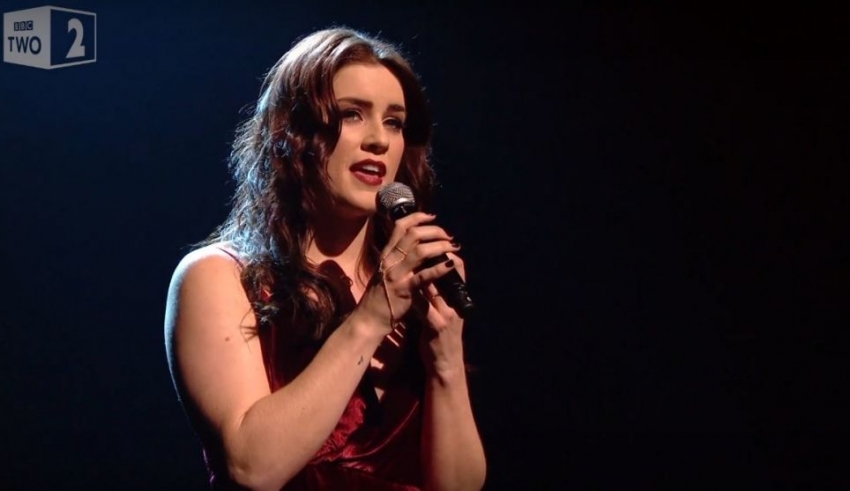 Good evening to all our readers and welcome back to our national final revote project! This time, we have reviewed the six songs that competed in the British national selection show. Enjoy the reviews by Ferdi, Kai and Calvin and the results below!

Holly Brewer – I Wish I Loved You More

Ferdi: This is how you make a great song, UK! Starts out nice and slow and then explodes at the chorus. I like it, but it’s still far from ideal.

Calvin: I wasn’t as convinced by this until the live performance – it seemed rather plodding. But she sang the heck out of it, delivering beautifully, especially going into the final chorus with a stunning glory note. Would have been a very worthy winner.

Kai: This is totally not my kind of thing, but I think UK should have taken the gamble and sent it. Holly was the performer who I thought had the strongest connection to their song. Easily the best performance of the night. It was incredibly soulful and passionate. “Wish I Loved You More” may not be anything particularly special but it’s for sure an earworm. The chorus keeps creeping it’s way into my head. I think it’s a shame we turned this one down. I don’t love it but it had the best overall package.

Danyl Johnson – Light Up The World

Ferdi: Thank you kindly but no, I really had to resist the urge to yank my earplugs out after about a minute of this. The song sounds cheap and the vocals are far from good; this is surely not the best the UK can offer, right? Big no-no for me.

Calvin: The song itself was a difficult one to sit through and felt very cliché, even within this field. To make matters worse, the live performance presented some challenges; did anyone else catch how shocked he seemed when the judges praised it?

Kai: An absolute car crash of a live performance, and not an enjoyable one. Danyl whines his way through a song that sounds like something that would be turned down at the Belarussian audition stages. His vocals are extremely nasal and the song just isn’t up to scratch. Easily the weakest of what’s on offer here. I’m glad we avoided this one.

Lucie Jones – Never Give Up On You

Ferdi: Clearly the best one here. For me, that is. I’m a sucker for ballads and this one is close to perfection! I love the slow build up and the subtle “lift” after the first chorus. It’s not too sudden, too hard, no, it keeps the song as tender as it was while breathing more life into it. The best winner, by a few thousand miles, and on its way to become my 2017 favourite.

Calvin: Nothing really could stand up to this one. Performing alone is a risky choice taken by very few performers in recent Eurovision history, but her powerful vocal filled the stage wonderfully. People are clamoring for a revamp, but I don’t see why it would need one.

Kai: I’m all about ballads. I’m also a sucker for piano and strings. You’d think this would be a match for me? Well, the song here itself is rather beautiful. I have major artist problems though that are stopping me from enjoying this. Lucie is a West End singer and it shows here. I would love to hear someone with more of an edge sing this, perhaps a singer like Marianne Faithfull. It needs a lived in voice. Right now this feels like an actor playing a role. The vocals are flawless and incredibly strong, but the performance is just not connecting with me. Having said that though, I think it’s the strongest entry we’ve had in a while. I may have big problems with the delivery but the composition is beautiful.

Ferdi: Sounds nice! The fact that it’s more up-tempo than some others makes it shine. Nice music, okay voice. Would’ve been a decent pick.

Calvin: A lot of people have said they would give this the win, but I don’t see it. The production of the song felt a bit underdone and, dare I say, lazy, as did the performance on the night.

Kai: “Freedom Hearts” is a perfectly fine little pop song. The problem is that it’s forgettable and on a one track path from start to finish. The production is decent and it’s performed well enough, but it’s lacking a peak for Olivia to reach. It’s not bad but I believe it would have fallen flat as a Eurovision entry

Nate Simpson – What We Are Made Of

Ferdi: To keep it short, a pretty bland ballad. I’ve heard people calling the winning song bland, but this is way more so. It comes across to me as a bit repetitive and there’s little to no variation in the song. Even the lift at the end isn’t that… exciting for me. Nope, thanks!

Calvin: Though one of my favorites before the NF, the performance was very austere and lacking in the passion the studio version presented. The song itself is rather nice, though, including the chorus, which seems to have been panned. Surprised this went as unnoticed as it seems to have gone, even after the performance.

Kai: The verses of this song have such an unusual beauty. Sadly the goodwill I have is spoiled somewhat as the generic chorus hits. It’s just too much of a contrast. The song becomes a schmaltzy cheese-fest. That’s not to say this still doesn’t have it’s charms though because it certainly does. Nate has a wonderfully expressive voice and he makes the most of what he’s been given. There are parts of this song that are wonderful. It’s just a shame about the weak chorus.

Ferdi: Yay! Sounds great. I’m liking her voice her and she’s got a nice track and just as nice of a performance. Would be a more than decent entry for the UK.

Calvin: This was my least favorite of the field. Some of the orchestrations felt simultaneously dated and lacking in charm, which is kind of a deadly combination, not to mention a rather dodgy live vocal.

Kai: Terribly trite lyrics to one side, this song is actually not too bad. The general opinion on this one is that Salena’s performance was a major letdown, but I don’t actually think it’s too bad. Her vocals for sure aren’t the best but I think she carries the song fairly well and with the right amount of energy.

8 Wish I Loved You More

6 What Are We Made Of

12 Wish I Loved You More

8 Never Give Up On You

10 Wish I Loved You More

8 What Are We Made Of

Sadly, only 7 votes were cast in this televoting poll. Wish I Loved You More and Never Give Up On You both got 1 vote which equals 14% of the voted and 24 points. Freedom Hearts slayed the televote, scoring 5 of the 7 votes (71%) which equals 124 points!

That brings us to these results:

15 Light Up The World

Congratulations Olivia Garcia and Freedom Hearts on a landslide win! The song joins the club of Albania’s “Botë” and Belarus’ “Historyja Majho Zyccia”. Next up is the revote for the Finnish selection!