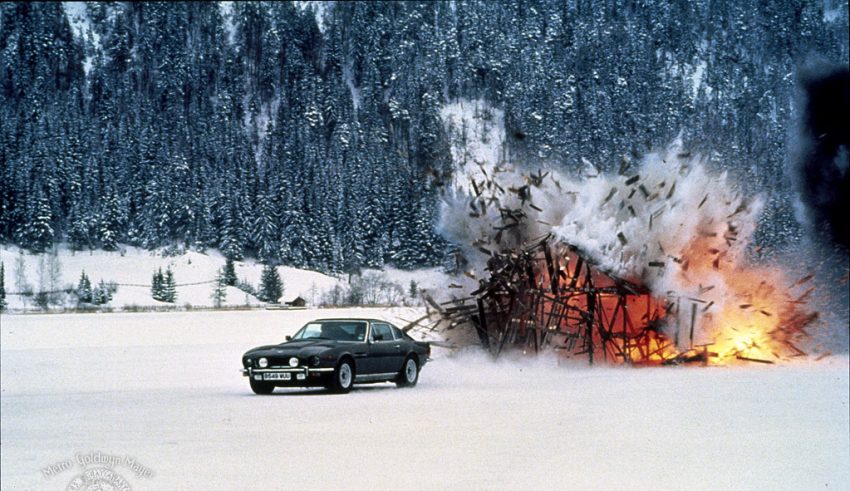 Every couple of years, a song pops along at Eurovision that has the fanbase cooing over it being “Bond-esque.” Two recent examples are Austrian Conchita Wurst’s magnificent power ballad “Rise Like a Phoenix” (2014) and Belgian Sennek’s “A Matter of Time.” (2018)

And by Bond-esque, fans usually mean the song that plays after the opening action sequence of a James Bond movie. The as-yet 25th (official) installment featuring the international hijinks of alcoholic, womanizing MI-6 Secret Agent 007 up against monomaniacal villains and mysterious international conglomerates (S.P.E.C.T.R.E.!) began filming in Jamaica, with Daniel Craig returning for the fifth time and director Cary Fukunaga brought on to helm it.

So rather than numbers that are “Bond-esque,” are there any Eurovision connections to the British film franchise that kicked off in 1961 with Sean Connery in Dr. No? Plenty, as it turns out. So much so I have to condense the entries and jam them into two parts.

Let’s start with the obvious and most current reference.

This one has to win prize for both oddest Bond track and oddest Madonna track. An electronically constipated Madonna guesses she’ll die another day before uttering “Sigmund Freud” and goading him to “analyze this.” I make it sound like it’s not good – it’s not the worst Bond song (by some margin, actually), and is often unfairly tarred by the frankly terrible final film of the Pierce Brosnan era (which started with the magnificent “GoldenEye,” moving to the competent and mid-range “Tomorrow Never Dies,” before diving into outright awfulness with “The World is Not Enough” and “Die Another Day”).

The upside to the song “Die Another Die” is that Mirwais Ahmadzai’s successful rebranding of Madonna with her eighth album “Frozen” continued with their collaboration here to make it one of the more contemporary sounding Bond openers. And Madonna’s fencing scene with Brosnan’s Bond is one of the better moments of Madonna’s film career, even if the sexual innuendo in the scene groans more than the ice underneath Bond’s invisible Aston Martin as it drives around the ice palace built by the North Korean general surgically altered in Cuba to look like Tony Blair. Actually, come to think of it, the Freud reference may be a connection that scene’s terrible puns.

Three countries refused to return to Eurovision 1970 after the four-way first place tie of Eurovision 1969. But of the four, Lulu’s “Boom Bang-a-Bang” is the one everyone remembers fondly and feels was a deserved winner. Sadly, her “The Man with the Golden Gun” is a relatively disappointing opening song for a relatively disappointing second entry for Roger Moore as 007. But not because of Lulu. Her vocals are grand. It just seemed more of a Connery era song right after 1973’s “Live and Let Die,” which has the fantastic title song by Paul McCartney and Wings, which gave the Bond series a more 1970s refresh. The song itself did not chart on the UK Singles Chart, the first official Bond franchise number to do so.

The movie itself was fine, though it had a lot of missed potential, especially when you cast a legend like Christopher Lee as the titular villain (though his golden gun looks a lot more rinky-dink and homemade than those 3D printer guns). The film is also notable for Maud Adams being the first Bond girl to appear twice as different characters (the bizarre yet underrated Octopussy being the other), Fantasy Island’s Herve Villechaize as henchman Nick Nack, Swedish model and actress Britt Eklund as Bond’s hapless assistant Mary Goodnight, and a return of Clifton James as bumbling racist Louisiana sheriff J. W. Pepper from Live and Let Die.

I will pick a fight with anyone who has something shady to say about Welsh demi-god Timothy Dalton as James Bond. After the silliness and relative frippery of the Roger Moore era, we got a more serious, dark and brooding Bond, and the action sequences of the two Dalton Bond movies are among the best in 1980s cinema.

But one thing that did not change much from Moore’s “View to a Kill” to “The Living Daylights” – the
titular song by Norwegian pop outfit A-Ha, who had just scored a massive worldwide hit with “Take on Me,” was as synthesizer forward as Duran Duran’s earlier number. Singer Morten Harket and A-Ha guitarist Pål Waaktaar were reportedly in a strained relationship with regular Bond film composer John Barry, who often collaborated with artists to achieve that grand “Bond theme” sound with his orchestra. But the song, as well as the film, does have its fans. But it should have more.

Harket was co-host of Eurovision 1996 in Oslo, Norway with Norwegian TV present Ingvild Bryn, after Norway had won Eurovision 1995 with Secret Garden’s “Nocturne.” Harket even opened the show with a performance of his new single “Heaven’s Not for Saints.” Generally, Eurovision 1996 is hated due to the controversial non-televised audio only pre-qualification round, which took out the likes of Kaliopi, preventing Macedonia’s debut that year, and Germany, in their only non-final appearance to date. Harket was charismatic enough and had rapport enough with Bryn to do a fine job.

We’ve covered Afanasieff briefly before, though this link comes to mind as Mika Newton, who brought “Angel” to Eurovision 2011, just recently parped up on social media about Anna Odobescu bringing Kseniya Simonova, the same sand artist, to Eurovision 2019 for Moldova’s “Stay.” Newton, you may recall, prevailed in a highly controversial national selection for Ukraine (is there any other type?), and she had originally wanted to swap out “Angel” for another song written for her by legendary writer and producer Afanasieff, who has begun working with the singer in Los Angeles. After much teeth pulling on both sides, “Angel” was sent but on the promise it would receive a significant revamp. And with that, we lost the opportunity to have the guy who brought us “All I Want for Christmas is You” by Mariah Carey.

But before that, Afanasieff co-wrote the Gladys Knight performed “Licence to Kill,” the opening track for the most underrated Bond movie ever. It is gory, violent, and contained a modern sensibility and dealt with a cocaine kingpin based on Pablo Escobar played in all his serpentine glory by Robert Davi. Its locations were beautiful, particularly the opening sequences in Key West, Florida. Dalton’s Bond goes rogue as he exacts violent revenge on those who killed his friends. Carey Lowell is a fantastic, modern Bond woman, and the film even fits in Wayne Newton in a comedic role as a sleazy tele-evangelist. Also watch for a young Benicio del Toro as deranged henchman Dario, and a tanker truck chase which is one of the most amazing vehicle chase sequences ever committed to film.

We’ve covered Reed before, especially since he passed recently. But instead of focusing on his James Bond connection, we looked at his Leeds United connection, mostly because it was the start of Bielsa-fever in the 2018/2019 English Championship, and why not, we’re also looking for Eurovision links where we can find them. Les Reed performed piano for the John Barry Orchestra at the time, and Barry was commissioned to write the theme song for a film adaptation of Ian Fleming’s 007 spy novel series starring an unknown Scottish actor named Sean Connery. And the song, in some variation or other, is featured in every single Bond film to this day.

Reed, with Barry Mason, co-wrote “I’ll Try Not to Cry” for the great Kathy Kirby at A Song for Europe 1965. The song came in a close second to “I Belong,” which in turn came in second to the ye-ye juggernaut of Frances Gall and Serge Gainsbourg.

There’s two questions here. How did Jack White get songwriting credits for Netta’s Eurovision 2018 winner “Toy”? And when did he do a Bond film song? The first is that unlike the gazillion plagiarism accusations due to similar sounding basslines or chord progressions aimed at Eurovision entrants, this one was settled by the writers of “Toy” and Universal Music, who represent Jack White and the song “Seven Nation Army.” That’s his Eurovision connection, I’ll keep it brief.

Now does anyone actually remember “Quantum Solace,” Daniel Craig’s second Bond outing (though first as Jason Bourne, the duller action franchise this one seems to aiming to replicate with its badly chop-edited action sequences)? The plot was about getting a country’s water supply or some such. And who remembers the bland Alicia Keys and Jack White duet “Another Way to Die” that opened the film? This is the one bad Bond movie that is that way due to being boring and forgettable? Like “Avatar,” it’s a box office hit that no-one really remembers too much detail about. Say what you will about “Die Another Day,” but boring it is not.

Okay, we were reaching a bit here, but I can’t dish out all the good ones today. Next time, we have another Eurovision winner with a Bond song, a legendary British crooner, a West German Eurovision regular, and a couple more surprises who have graced the franchises of Eurovision and Bond, James Bond.