Home Editorials Why the Super-Fans matter for Eurovision 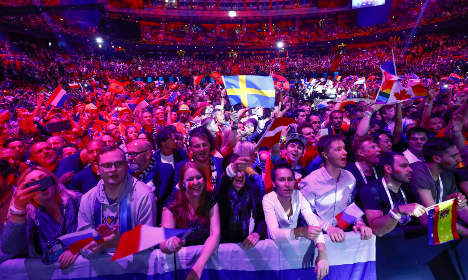 For many hardcore fans of the Eurovision Song Contest, attending the live shows is an annual pilgrimage that begins with buying OGAE fan packages. These fan packages can be pricey, but help assure these super-fans that they have tickets to the three live shows and three jury rehearsals and can proceed with purchasing airfare and lodging. Many were shocked to learn that for Eurovision 2017, the OGAE fan packages would not be available. The ticket issue was eventually resolved with the broadcaster.

Although the fans were ultimately purchase tickets, the topic has garnered much discussion.  On one hand, there are those who are greatly angered at the EBU and NTU for letting this priority indifferently slide by.  On the other hand, there are those who do not see the big deal in not providing this access to a small number of fans in the scope of the total worldwide viewership. For this side of the argument, the belief is that these super-fans should go through the regular ticket sale like everyone else.  Further, from an economic standpoint, if we are to assume that the many issues that have come to light in this year’s production of the Eurovision Song Contest is requiring NTU to focus on the essential components, it would not be unlikely that one of the first things to go would be these OGAE fan packages.  After all, for the NTU, ensuring a good show for the many millions in May may supersede the demands of a few super-fans.

If you have listened to recent ESC United podcasts, you have heard me sarcastically joke that OGAE fan packages are just a way to make super-fans pay big bucks to be living props for a TV show (i.e., the on-screen studio audience).  However, despite my sarcasm, I believe no one should overlook the importance of the super-fans.  They are a driving force of what makes Eurovision the phenomenon that it is and should not be ignored by the EBU.  My reasoning is based upon a theoretical framework that discusses how ideas are spread – the Diffusion of Innovations.

The late Dr. Everett Rogers was one of the first to discuss the Diffusion of Innovations in his 1962 book of the same name. This theoretical framework centers on factors that affect adoption of ideas within a community. Engaging innovators of the idea, community members with early “buy-in” of the idea, helps to accelerate dissemination. In the context of Eurovision, I envision super-fans as these innovators, who are diligent in following along with Eurovision throughout the entire season.  The super-fans help to spread the “idea” that Eurovision is a great production that peers in their social networks and communities should watch come May.  In other words, these super-fans serve as the starting point for an annual word-of-mouth campaign.  While the larger majority of the viewing audience may not follow the national selections, the super-fans are slowly diffusing free advertising for Eurovision starting in the Fall.  Those within their social networks, who may be more casual followers, remain aware of Eurovision, are hopefully more inclined to watch, and also share that news with their friends, thus continuing the diffusion process.

Having personal endorsements of Eurovision, be it through the super-fans’ long tenures of viewership or their experiences of travelling to see the show live, provide a more personal touch that can sway people to tune in.  In countries where Eurovision is less-known, such as the United States, these super-fans stateside are integral to helping drive viewership to Eurovision.com and the national broadcaster, Logo.  Take, for example, my friend Alan from Indiana. He learned of Eurovision from me in 2014; in 2015, he took the plunge and went to Vienna with me to watch the shows. While there and upon returning, he immediately cemented his place as a fan, telling people about his experiences and then encouraging them to watch the 2016 edition.  Such conversations were enough to make them watch for the first time ever. Given the positive feedback that they provided, I would not be surprised if they continue to watch annually, which from the perspective of the EBU and Logo, is a win.

I envision this scenario not being unique only to Alan and myself; this likely has occurred all across the world.  Even in countries where Eurovision has been in the public mindset, such diffusion of beliefs that place Eurovision in a positive light is important.  Even when the national perception of Eurovision is negative, super-fans are important in presenting Eurovision in a positive light and retaining former viewership. Moreover, super-fans are authentic.  Despite loving the show, they are not afraid to express dismay when they don’t like songs or the results.  How they endorse Eurovision to their friends is not scripted, but rather personalized, which goes a long way when thinking about marketing.

Although super-fans make up a small proportion of the actual viewership, their status within Eurovision is irreplaceable. Keeping them happy is essential.  Thus, maintaining OGAE fan packages is warranted.  The time that the super-fans could be marveling about the upcoming Eurovision was instead bogged down by their complaints of more priority on the hands of the EBU and NTU.  Keeping the super-fans happy will continue their dissemination of positive feedback to their social networks, which will hopefully lead to casual viewer interest. Furthermore, if we want to label them as nothing more than props to a live show, no one can deny that they project great enthusiasm and are the best to epitomize the passion that encompasses Eurovision.  Without super-fans, Eurovision may continue.  But the show will lose its spark by undeniably losing a major component to its marketing and personality.