Home 2020 Think about this: Daði Freyr confirms 2021 return for Iceland 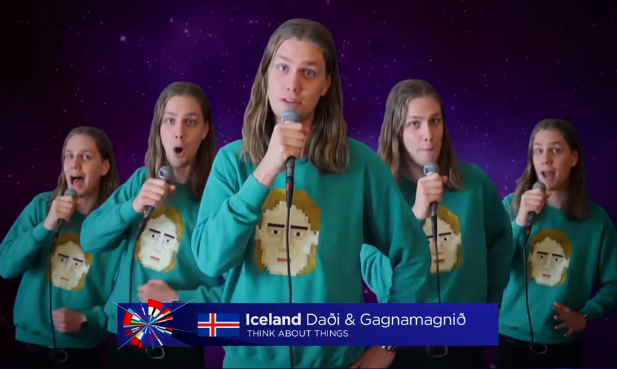 Finally, it has been confirmed. Daði Freyr Pétursson is now officially representing Iceland in 2021, per his official twitter account: 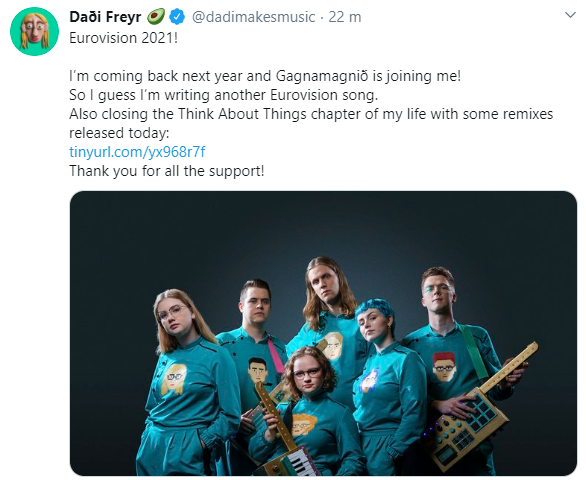 Pétursson will be representing Iceland as a part of his band “Daði och Gagnamagnið” (loosely translated as: “Dadi and the Data Rates”). The group, which aside from Pétursson consists of his wife Árný, his sister Sigrún and three close friends, went viral on YouTube and TikTok with their song “Think about things”, an ode to Petúrsson’s infant daughter.  The song was notable for its disarming dork dance, its clever lyrics and its atari-console-like synth riffs.

The subject matter and choreography led to many comparing the group favourably to the winner of the 1976 contest, Brotherhood of Man (‘Save your kisses for me’. They were considered one of the hot favourites to win the 2020 contest. The only other entry that achieved similar viral status while simultaneously being a potential winner were Russia’s Little Big.

‘Think about things‘ was Pétursson’s second attempt to represent Iceland at Eurovision, having entered the 2017 National Final with the song “Is this love?“. The song, describing the early budding love between Petúrsson and his (then) girlfriend Árný Fjóla Ásmundsdottir, finished second to Svala (‘Paper’).

Earlier Pétursson had stated that he had no interest in competing in Iceland’s national final, Söngvakeppnin, but that he was willing to do Eurovision if the Icelandic broadcaster, RÚV, chose him internally. With this confirmation from Pétursson’s side, it would seem that Söngvakeppnin is out in 2021 and that Iceland are banking on Daði & Gagnamagnið to provide Iceland’s best result yet.

So what do you think about Daði & Gagnamagnið’s return to the contest? Do you believe they will be able to match their previous entry or would you rather have seen a fully-fledged edition of Söngvakeppnin? Share your thoughts in the comments, our forum or on social media!