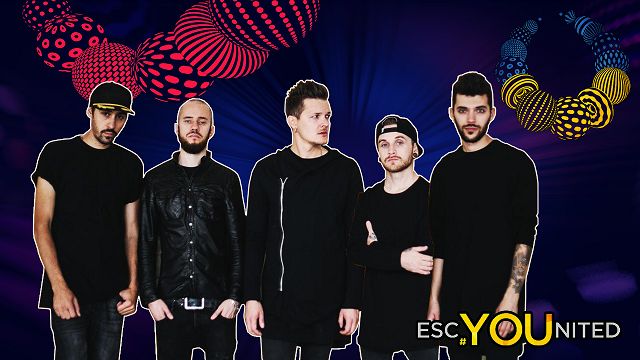 Romeo – 8 Points
Well I was not a fan of Ukraine in 2016 one little bit, I mean it was literally last in my ranking.. This year Ukraine are quite firmly in my top 10! This is a great song, with a few little tweaks it could be amazing. I love the rockiness and the pop elements, it just works really well. The performance in the NF was great!

Zack – 8 Points
The perfect time to pull a gutsy move for Ukraine.  As host country, they have nothing to lose.  So why not kill their streak of beautiful female-identifying singers (Yes, I’m including Verka in this) and go with an all-male rock band.  Dramatic and timely, perfectly capturing the uncertainty, anxiety, and discomfort that many people are facing looking towards the future.

David – 8 Points
I think we get way to few rocks songs, in these recent years, so I’m really happy that we get at least this 1 rock song from the host country. Somehow, I doubt this would’ve represented Ukraine, if not they were on home soil, but who cares. Ukraine wanna rock the stage, and make Kyiv rock along and I have to applaud the host country for this. The song gives me life and make me feel awake inside, and since it is the only rock song, then I will with no doubt support this, even if I might risk being the only one enjoying this song.

Sean – 8 Points
YES! I did not expect this to be chosen as the host entry at all and it’s fantastic to see a proper rock song crash back into the contest once again. Ukraine made a smart move picking this song, with the pressure off and the ability to show a different fiery passion from the troubled nation. The bridge and lead into the final chorus is this year’s LoveWave moment, and the song keeps me hyped from the first second to the last. Fingers crossed the fiery performance will earn big points in May.

Nenad – 6 Points
Entertaining, but messy. I have never been the one to support a rock song at Eurovision, but always liked to see the diversity. This song has a good story behind it. It is modern and titled ‘Time’, with a watch as a main component of the song – I think that will help them get extra votes. Just not my cup of tea.

Robert – 5 Points
Last year it was only by the televoters taking priority over the jury that we got Jamala at Eurovision. The second place band was a lot more along the lines of this year’s entry. We have something loud, rocky and dramatic in a sense. It’s just a shame that it’s not really very good. I really like the way it starts but the song kinda loses its way thereafter. The intensity comes and goes but it lacks a core structure to build around. It feels very disjointed as a song. I will admit, I do rather like the loud ending, but overall it just leaves me feeling a little disappointed. I suppose countries like to go down different routes after winning, but I wish they’d done a better job with it. 5

Gerry – 5 Points
A solid, alt-metal song like “Time” is always a well appreciated addition to any Eurovision year, a much-needed reprieve from the swathe of more traditional-sounding music. O. Torvald is a perfectly competent band with an interesting aesthetic that’s sure to stand out onstage at Eurovision. Still, the vocals could use a bit more polish, judging by the performance at the Ukrainian national final.

Stefan – 5 Points
It was really interesting to see this song win, since fans, my self included, considered them as outsiders. In any case, I think it is a bit too agresive for my taste. The thing I do like is their performance from Ukrainian NF and I hope they will keep it similar for the Eurovision stage. Also, I have a feeling that when I try to listen it, every time I love it a lil bit less

Matt – 5 Points
I’m all in favor of some great rock. But unfortunately Ukraine is kinda missing the mark for me. First off, the lead singer clearly doesn’t speak English well but it’s not about enunciation, it’s like there is a disconnect that I just can’t ignore. Don’t get me wrong, I can’t call this horrible, it has some redeeming qualities such as the instrumental part but if I had to describe this song in one word, I’d use the word “Underwhelming”

Jordan – 4 Points
Hugely different to Ukraine’s winning entry from last year, it is a rare hard rock entry. A perfectly serviceable song. It is however forgettable and I don’t think it will bother the top end of the leaderboard.

Calvin – 3 Points
A rather atypical entry from our hosts, and unfortunately, a somewhat disappointing one. The song is too clean musically to sell the dark, industrial vibe suggested by the (admittedly impeccable) staging from the national final. The plucked, high guitar line in the pre-chorus and melody in the verses don’t fit well with the full-throated, melodramatic chorus. By the final minute, the song is drawing from arena rock influences which take it further away from its attempt to convey darkness.