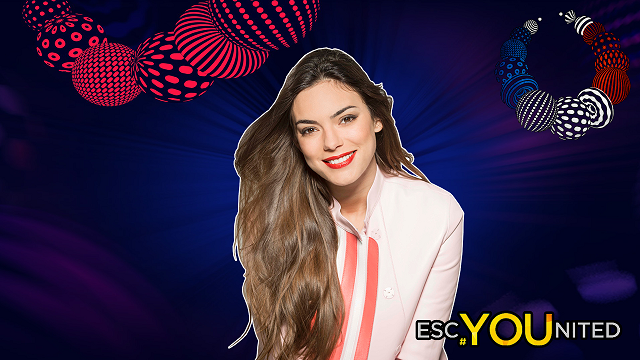 Calvin – 10 Points
This is a very strong entry from France. The melody and production are very haunting, especially in the introduction and the verses. By the time the first verse is repeated near the song’s end, it’s built a lot of momentum; while the choice to have the song’s climax be a verse is a strange one, it works perfectly. The song’s ending wraps things up well without going overlong; “embrasse-moi, tell me that you love me” uses its higher melody well to keep the song’s energy up. When the composition is combined with Alma’s warm, genuine performance, it’s a brilliant package.

Jordan – 9 Points
This is one of the best entries this year. A superbly crafted pop song – there’s a great build up to the chorus and Alma has charisma in spades. Her vocals both on the record and live have been outstanding. The only negative thing I can say about this song is the recent re-working of the song to include English lyrics. I would have preferred the song to remain in 100% French. I predict a top 5 finish for France.

Sean – 9 Points
For the first time in the while I’ve been following Eurovision it seems France have actually stuck to a formula that works for them, and while I loved l’Hexagone’s unpredictability, this is another fantastic, authentic pop entry. I think I preferred it before the dreaded revamp, but nonetheless France are staring in the face of another solid result.

Matt – 8 Points
This is what I call a solid effort. Alma’s song has a lot going for it; it’s catchy, it has a nice rhythm, it stands out and it’s bilingual. It sounds great in the Studio, this will really come down to the live performance and could go either way. This song has a powerful chorus and if executed right, could have everyone dance along in Kyiv.

Stefan – 8 Points
Don’t know about you, but I love the first version of Alma’s song. I loved it the momment I’ve heard it. I think that she didn’t need those lyrics in English. There is no doubt that French delegation is preparing some kind of special performance and I am looking forward to see France in top 10 again.

Gerry – 8 Points
Hot on the tail of Amir’s sixth place finish last year, France is back with another contender this year in Alma’s “Requiem.” Punchy, rhythmic and oh-so-French, this song is a refreshing listen and also fun to dance to. While the original version was, quite honestly, better overall, the Eurovision version sounds like it would be well-performed onstage in Kyiv. The most controversial change, the English used in the chorus, might not have been received well by fans, but, perhaps if there were any song this year that would not be harmed by a bit of English, it’s this one.

David – 7 Points
This song took a big hit, when the English lyrics were included. I understand that you wish to appeal to more viewers, but sometimes it works out, and other times it doesn’t. It didn’t work out for me this time, but the few changes to the music are great. Alma has the charisma and she goes well with the song, I can feel the French touch of the song, and therefor I’m sad about the English lyrics.

Zack – 7 Points
The bubbly Caribbean-pop from the first version released has been replaced with a much more dramatic musical backing, but the instantaneous catchiness of the original version still is here.  For me, the French only version seems to plod along, so I welcome the inclusion of the English language chorus as it helps break the song up in sections.  Because this is a live singing competition, I do have some concerns after seeing her performance at the Ukraine National Selection, but still a lot of time to improve and build upon the solid base on which this year’s entry sits.

Robert – 6 Points
After a string of entries I found to be fabulous, France has slightly disappointed me this year with this offering. It suffers from the random English choruses which seem forced on it, as opposed to fitting in naturally with the song. Apart from that, however, it is a fairly decent entry. Alma’s voice is bright and bouncy and the song as a whole feels light and upbeat. I really like her singing style as well as it brings out the best of the song. I just never really got into it and since the English insertions; I haven’t tried too hard to get excited about it. I’ll admit that France are doing a better job at finding songs which work well at Eurovison with this and Amir, but this is just not getting me too excited this year.

Nenad – 6 Points
France didn’t want to play a risky card this year and decided to send charming Alma with a pop song that everyone could enjoy listening to. Requiem reminds me a lot of Amir’s song last year, but they are completely different. ‘Requiem’ is more dated and repetitive. I can see it succeed in Kiev, but far away from Amir’s last year result.