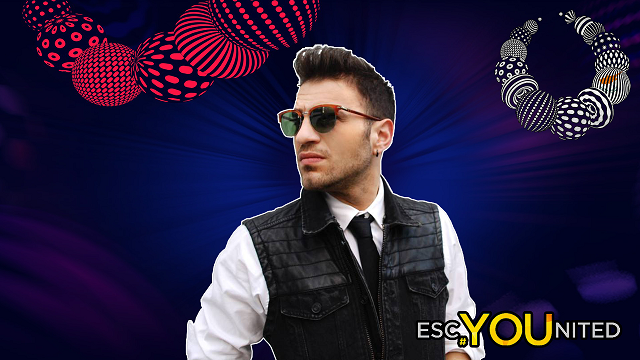 David – 10 Points
Thomas G:son has done it, once again! This song caught me from the first time, and Hovig is without a doubt, a great singer for this song. I was into this one from the very start, and still it just grows and grows. The beat is just on point for me, the lyrics are easy to remember and you can easily sing along on this one. I personally have a hard time, not singing along with this one.
I’m sure many will probably think I’m insane, for saying this, but I think it’s way better than “Euphoria”.

Stefan – 9 Points
After that brake in 2014, Cyprus has pulled it together and is giving us amazing songs. Big round of applause to Hovig and the team for Gravity. I want to be blown away with his performance

Romeo – 9 Points
This is a modern song, I like it. I think it will do well. It reminds me of Loic Nottet. This will be in the final, I have no doubt about that. Its just a matter of where it will place. I have to say this is one of my favourites. Its a great song, its modern and he will perform it well!

Ferdi – 8 Points
A hip and modern pop song. The instrumental with “claps” in the background catches me from the first second on and it never let’s me go. The chorus is immensely catchy and I can’t stop humming this! I quite like his vocals, too.

Matt – 8 Points
I’m getting a “Rhythm Inside” vibe. With the proper Staging, this has the potential to become one of Cyprus’ best results to date. It captures your attention from the first second and forces you to pay attention. The versue are just as strong as the chorus with an effective bridge. It’s not without its flaws though and I’m referring to the lyrics. Too much rhyming for the sake of rhyming: your company, lean on me, falling free, gravity. I could have done without that to be honest. But overall I’m a happy camper

Zack – 8 Points
Really strong production that to me has the markings of Thomas G:Son, including bits of ethnic flare and quick instrumental breaks that allow the listener to take in the song. The comparisons to Rag’n’Bone Man’s “Human” is mostly due to the chain-gang backbeat, but this song is a beast on its own.

Sean – 7 Points
It took a while to grow on me, but I’m certainly glad it did! It was quite a surprise to see Hovig’s go for such an entry but aside from a slightly prominent accent, this is another strong entry from Cyprus. It’s slick, infuriatingly catchy and musically interesting, although I’d love a bit more synth. Dare I say it, it could be the strongest Cypriot entry in years!

Gerry – 6 Points
This song grows on me the more I listen to it. It’s pretty catchy. The composition is rather plain, but Thomas G:son is a master at producing tunes that stay in the listener’s mind. Gravity’s got that modern sound, with a beat to bop along to. While the lyrics don’t really say anything and the music doesn’t hit any particular emotions, Hovig is a very capable singer. With the right staging, I could definitely see Cyprus on the list of qualifiers from the bloodbath that is the first semifinal.

Robert – 5 Points
I’ll admit it from the off; the music is really not my kind of thing, but I have to concede that I find myself getting into the beat during the song. The chorus opens well with the brief pause before it bursts into the vocals, but it soon gets all a bit repetitive. The lyrics are somewhat inane as well with dodgy English “no matter where you be” or “You be gravity”. I fear it’s one of those songs which will just disappear into the background for the die-hard fans, then we’ll all wonder how it qualifies come the show because it does make a decent impact on the first few listens. A decent example of its genre musically (but then I’m not a fan of the genre full stop!), but lyrically it falls down for me.

Nenad – 4 Points
Let me be your Gravity’ This part of lyrics describes the cheapness of the whole song. I just can imagine a performer meeting a composer in a studio in Stockolm and G:Son offers to Hovig a Melodifestivalen entry from 2011 that failed to even reach a qualification round of Sweden’s favourite fest and sell it for maybe 10000 euros! Poor. The song is written in a way that circumvents a performer to give it’s best, but follows a same musical note the whole song. On the other hand, Hovig is a great performer and sells this song well. We must admit that he deserves a better song!

Calvin – 2 Points
There’s something quite plodding about this song. It’s probably the massive percussion that takes over the verses. Once the chorus comes, things pick up, but he doesn’t quite have the support in his vocal for the higher sections, and the voice becomes a whine, which doesn’t help pull off the message in the lyrics that he’ll protect his partner. Also, since the song starts in such a loud place, there isn’t room to build the song from its first verse, so the energy subsides. In a lower key and with a sparser verse at the start, this song surely had potential. As is, it’s difficult to get through.