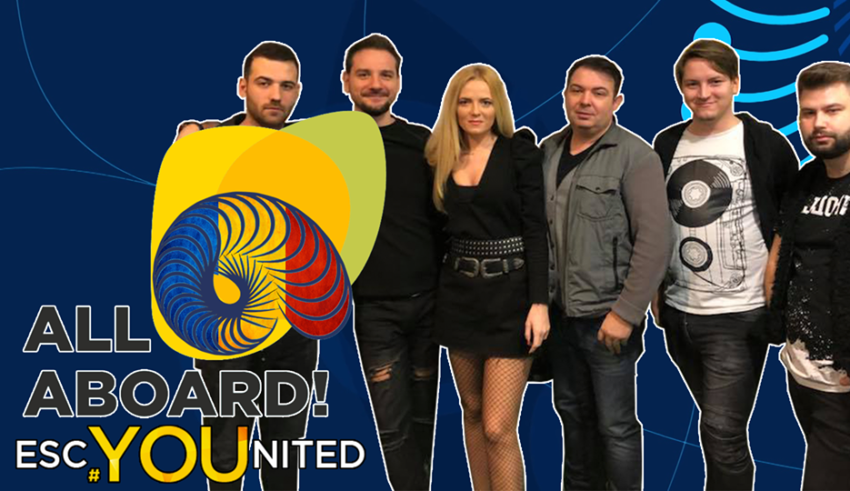 Before we pick apart the Romanian offering for this year’s contest – “Goodbye” – it is time to wrap up the feelings and thoughts on yesterday’s spotlight entry. What did #YOU think of Moldova? Here are some of your thoughts…

ZoboCamel (Forum) – “Quite an impressive performance at the Riga pre-party. Sure, it’s tacky, but they’ve got good vocals, plenty of energy, smiles all around, and those little bits of choreography towards the end are fun! This is gradually climbing my rankings, and I’m hoping it’ll make it out of semi-final 2.”

Moldova overall did not fare well with our readers, racking up a televoting score of just 39 points. Where will this put them in the table? We’ll find out below…

Robert – “Romania has gone EPIC this year! The song starts off slowly but immediately captures our attention with the lead singer’s intense and powerful voice. It then slowly builds up and up before exploding dramatically and basically ticking every box I have for this kind of song. I think it’s spectacular – fantastic singer with bags of confidence and the vocal talent to match and a song full of power and strength to match. It’s called “Goodbye” – I totally could see it as a closing song. Given it’s in the first half of its semi, that can only man it’ll make it to the final!”

Calvin – “The best thing about the Romanian entry is its emotional authenticity. The lyrics are a bit trite on paper, sure, but vocalist Cristina Caramarcu sings them so sincerely that it doesn’t matter much. The melody to this song is very warm and triumphant, especially in the chorus, adding to the feeling of sincerity which elevates the song. As with the lyrics, the production may sound a bit cliché in different hands, but the band have paired it with the right melody and vocalist to bring out its best. Romania have hit it out of the park this year.”

Christian – “If The Humans do not do well then they should know that they at least send us a real song and that other ‘Humans’ on this planet prefer they send non vocalists and bad rap but lets not talk about the past. Here we have a 80´s rock ballad that Heart or Bonnie Tyler easily could have performed. I prefer to say hello instead of goodbye and if there is any justice this has to do well but knowing that rock songs usually have a hard time at ESC I better find another song to like. Our girl can sing and make all the right hair moves. Love.”

Connor – “I wasn’t a fan of this song in the early days of Selectia Nacionala, but WOW, have I been converted! This song is arguably among the best Romanian entries I’ve heard, and it’s due to the soft rock vibe and message of the song. Plus, the vocals in this song are amazing! The Humans just got a new fanboy.”

Sean – “God, this is a classic, anthemic, arena-filling, nostalgic rock ballad at its very best. It’s probably too retro and dated for some but it’s a truly uplifting three minute journey and this is incredibly underrated by a lot of fans. She is one of the stand-out performers this year, and the last minute of the song is one of 2018’s epic moments. I think The Humans will surprise people with a comfortable qualification in May!”

Zack – “I have heard people complain about how staggered the song sounds, going from soft to loud to soft to loud, but I actually think it’s quite effective. Lead singer Christina has a strong voice and is very emotive. I don’t foresee Romania’s streak of qualifications going astray.”

David – “I’m doing my best, to be as little biased as possible, but only because it’s Romania, then I obviously feel that I have to support my mother country. Would I listen to this song as much, if it represented another country? Probably not. However, this is a style that I like, pop-rock is probably one of the genres that I prefer the most, but in this one case… let me say it like this then, I truly fear for our qualification record this year.”

Matt – “An 80s rock song vibe is all I’m getting from this. It’s a strange arrangement that still confuses me but at the same time also makes me want to listen a bit closer. In the end, it is probably one of the more forgettable entries of the year and I can’t give this one a whole lot of points due it being a bit uninspiring….but it’s not bad.”

Stefan – “Romania has always qualified for the final. But if it happened to Greece and Bosnia, and even Sweden (Remember 2010?), for sure it can happen to them. If they do qualify it’s gonna be borderline. The song is just average and frankly I am surprised to see this song won their national selection.”

Efe – “I know that Romania will be in the grand finale as in previous years but I really don’t want to see Romania there this year. I believe that “Goodbye” is not enough for Eurovision. Although I like the first verse, I really hate the chorus and it doesn’t excite me at all.”

So there #YOU have it, our jury have been kind to Romania and award it a total of 69 points! But how will #YOU rate it? Let’s check out the current standings…

Moldova’s low score means they go into last place, with Romania’s televoting result to come. Speaking of, it is now time for #YOU to have your say!

Make sure to leave a small review on Romania’s entry with us on social media @escunited, on our forum HERE or in the comments section below, and we’ll reveal the best tomorrow! Also don’t forget to vote in our poll below which will help decide Romania’s score.

Our next entry is one of the most hyped this year, but will the mysterious Equinox’s “Bones” bring a decent score for Bulgaria? Check back tomorrow to find out!