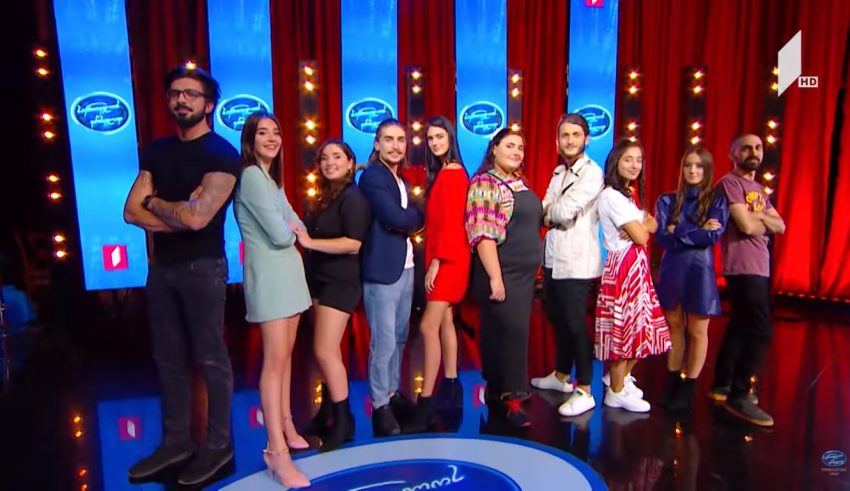 The third and final audition round concluded on Georgian Idol this evening, with the ten finalists being selected after a second round.

The ten finalists, in order of announcement, are (audition round performances linked in name):

Hosted by Ruska Makashvili, Star of Georgia or Georgian Idol is the Caucasus nation’s version of the Idol franchise. It is the second straight year the show will serve as the selection method for Georgia’s representative and song at Eurovision 2020, to be held in May 2020 in Rotterdam, the Netherlands. After tonight, these ten will be eliminated one by one by viewer votes until the Grand Final.

But before the ten finalists were announced, more golden tickets were handed out.

First up was Irakli Bitsadze from Rustavi, taking a turn on the stage dancing with judge Natia Todua while performing “Feeling Good.” Twirl a judge, earn a golden ticket.

Next was another X-Factor Georgia graduate in Merab Amzoevi. He went ambitious with his take on Rag ‘n’ Bone Man’s “Skin,” but with a deeper voice. Evgenidze in particular praised his vocal technique and earned a golden ticket to the next round. In the second round, Amzoevi showed he could do country rock and was one of the ten finalists picked.

Third up was Archil Gvasalia, a young mandolin player who had just spent time in the United States as part of the Future Leaders Exchange program. Judge David Aladashvili stressed that he had potential from his years singing in Georgian choirs, and earned a golden ticket.

Mako Maisuradze was next with her version of Etta James’s “I’d rather go blind,” a popular choice last year with female Georgian wannabe contestants. Maisuradze impressed enough to earn a golden ticket.

Contestant number five was Mariam Shengelia with the popular 1931 jazz standard “Dream a little dream of me,” performed over the years by legends like Ella Fitzgerald, Doris Day, The Mamas and the Papas, and Nat King Cole. She received a golden ticket, and in her second round attempted a song by an artist who has ruined many a reality show contestant over the years, Adele’s “When we were young.” Shengelia nailed it, and is a finalist as a result.

Anri Guchmanidze, the winner of X Factor Georgia 2014, was up next. He slayed with a version of Ray Charles’s “I got news for you.” He then wowed with Seal’s “Kiss from a rose” in the second round. From previews it seemed like a foregone conclusion Guchmanidze, and was when on the first named as a finalist when the cull from 37 ticket holders to 10 began.

The second round began and 37 became 10, though the tension was dampened somewhat as we had not seen a large number of these contestants audition. There’s no real tension in eliminating contestants you did not invest any emotion into.

However, the producers did throw us a curveball – who the hell is David Rusadze? He is one of the ten finalists, and I do not recall seeing his audition video or anything on Idol’s social media about him. I’ll admit I may have a cocktail or two while watching Georgian Idol, but did he perform during a bathroom break and TV-1’s facebook guy took a synchronized bathroom break with me and didn’t post the video? I guess we will hear more about him this week. I got that nagging feeling I have seen him somewhere before and I will be made fun for not recognizing one of the thousands of national selection finalists or X Factor or The Voice or Idol contestants we blog about every year.

One story that did come up this week was on Sulkhan Devadze, the complete unknown who became a viral hit in Georgia because of his performance last week. Apart from knowing which restaurant in Batumi he sings at and a few cellphone videos on YouTube, not much was known, but people do now as his audition video got 1 million views, an astronomical view for this franchise of Idol. He unfortunately did not progress to the finals, as his Frank Sinatra cover did not feel as warm and passionate as his first audition. Hopefully we will hear from the self-described peasant boy who came good as a lounge singer again.

Judged by famed Georgian musician David Evgenidze, The Voice of Germany 2017 winner Natia Todua, GPB’s First Deputy Director and Head of the European Broadcasting Union (EBU) Gender Balance Initiative Tinatin Berdzenishvili, and piano virtuoso and Julliard alumnus David Aladashvili, Idol will continue next week with more auditions and the final ten will be selected from the golden ticket pool. Be sure to tune in on Georgia’s TV-1 every Saturday at 10 p.m. Georgian time or on the Georgian Idol facebook page.

Whose performance impressed #YOU in the audition rounds? Any contestants #YOU thought would do well did not progress? Let us know in the comments below, in our forum, or on social media.