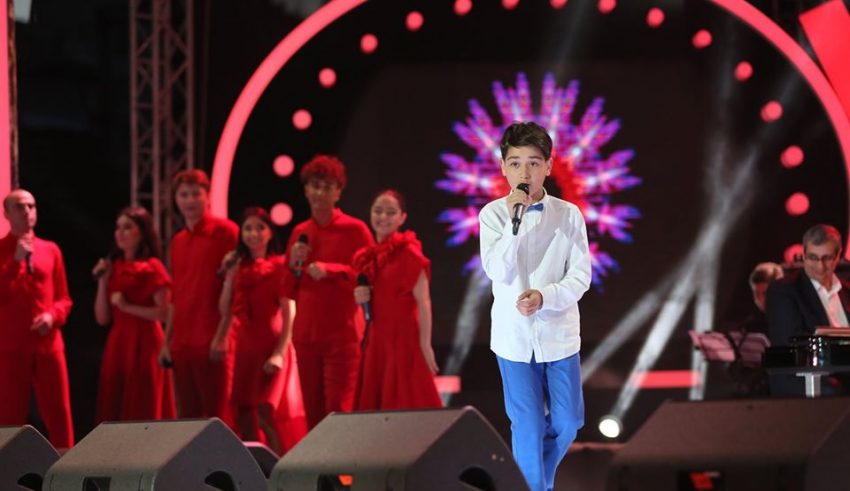 It’s 14 days to go until Junior Eurovision 2019, and we are counting down the 19 nations who are participating in Gliwice-Silesia on Sunday, November 24, 2019.

Georgia will appear for a 13th consecutive time since their debut in 2007. With three victories, Georgia has the most wins at Junior Eurovision. Their first victory was the group Bzikebi with “Bzz…”

Georgia also have two second place finishes in 2012 and 2017, and have never finished below 11th. Tamar Edilashvili finished in 8th place last year with “Your Voice.”

Georgia used the Ranina talent show for a second year running. Ten kids were picked by the Ranina producers and put through their paces on four different challenges. First, they each had to perform a song from a musical – either “The Sound of Music” or “Oliver” – in a duet with a famous Georgian singer, most of whom were Eurovision alumni, including Oto Nemsadze and Sopho Khalvashi (Georgia’s first performer with “Visionary Dream” and now the deputy mayor of the resort city of Batumi).

Second, they had to perform a song with the traditional choir Shavnabada, a group that includes members of Iriao who performed at Eurovision 2018 and as backing singers to Oto Nemsadze in 2019. Third, they had to perform with Quintessence, a sextet of young Georgians who perform jazz and acapella. The fourth test was a song leading the Tbilisi Boys Acapella group or the Gori Girls Choir.

Based on their combined scores from the four rounds, five of the ten kids made it to the Semi-Final, and three made it to the Final. Giorgi Rostiashvili edged out Ana Berishvili and Anastasia Garsevanishvili.

Born on August 18, 2006, Giorgi Rostiashvili has one of the more unorthodox (yet Orthodox) resumes of any Junior Eurovision entrant, and is certainly one of the best-trained and most experienced, as his competitors on Ranina found out the hard way.

When he hits 16, Rostiashvili will have the doors to two Eurovision contests open to him in Eurovision and Eurovision Choir (and three if he takes his piano studies as seriously as his professional and choral vocal training). Rostiashvili has amassed a cabinet of national choir and choral soloist awards.

Remember the somewhat surly guy with the bandanna who was the judge and had a tendency to almost break into tears whenever a kid nailed their performance at Ranina? That is David Evgenidze, also a judge on this season’s Georgian Idol, and one of Georgia’s most accomplished musicians and film score composers. He wrote “We Need Love,” and in hindsight, almost every test thrown at Giorgi in the Ranina process was utilized in this jazzy number.

Thematically, Giorgi told junioreurovision.tv that “it is very positive, bright and funny. With my song, I want to make everyone feel good.”

You can’t say that Giorgi does not deliver on that sentiment, but let’s see what our editors had to say.

Boris – 6 – “This lametastic background track for The Sims… <3? I want to stan… but I’ll wait until I see the JESC staging.”

Connor – 5 – “So I figured we learned our lesson that an acapella/jazz styled entry might not work well live when Georgia tried it in 2018…or Belgium tried it….or Latvia before them…..you get the gist. I’m really interested to see how this will go down in Poland, because I can’t help but be a little scared. But if my worst worry is how the song will sound live, is there really much worry at all? The harmonies (as always with Georgian Jazz) are fascinating, Giorgi has a beautiful voice, and the track is fun. I’ll wait to see how this one plays out.”

Daniel – 5 – “I am rather intrigued but also nervous about how Georgia will decide to stage with the acapella elements to this song. It is a fun, cute song that has spunk but also treads the line of campy. If done well it could pay off, if not we might see a similar disappointment as ESC Belgium 2011. ”

James – 9.5 – “This is a fun, whimsical track, with a great driving bass line and some great harmonies. Rostiashvili is probably the best vocalist at Junior Eurovision, and viewers of Ranina found themselves on the back foot as he turned on the charm and unexpectedly took down more famous and experienced competitors. Despite the usual “I love it when Georgia sends “ethnic” songs, but not this one…” patronizing from the JESC commentariat, Rostiashvili could do enough live to deliver a decent placement in Gliwice-Silesia. I suspect that live, “We Need Love” will be arranged so that Rostiashvili’s vocals in the final third will deliver the requisite fireworks to stand out from the pack.”

Melanie – 4.5 – “I like the fact that Georgia is always bringing original and unique songs! I really love the jazzy vibe, but after 1 minute it already loose my attention. Somehow it reminds me of elevator music and that’s not a good thing. Hopefully they can come with a good staging, otherwise I’m afraid it will be bottom 5.”

Roy – 4 – “Giorgi honestly sounds like such an incredible singer to me, yet it kind of feels like his talent got a bit wasted with this entry from Georgia. The kids that have to do the background singing for this will have a very tough time to deliver this song. I think this song has a big chance of being forgotten in between all of the other songs. And who do they want to win for themselves? I don’t see judges giving this a huge amount of points. Maybe that Giorgi can gain some online votes with his charisma and energy, but this has a big chance to flop in my opinion. I am not a fan of all the Pam’s and what not and if this comes on then I kind of feel like skipping it immediately. I feel really sorry for Giorgi, because the kid has talent, but this song doesn’t do it for me.”

Sean – 9 – “Oh wow, I love this! The verses don’t feel like much to shout about but I absolutely adore the choruses! This puts a big smile on my face and stands out from the pack, although for many I assume this would be for worse and not better. But this mixture of Witloof Bay, an M83 album track interlude and a backing song from Mario Kart (bear with me) concocts into a delightfully playful end result, perfect for Junior Eurovision.”

Stefan – 4 – “I am really disappointed. After couple of years of so strong songs, Georgia is “treating” us with this. I guess that they are tired of winning and we became a bit spoiled. Also you can not have the cords like para pa pa. Just look how Edurne ended up with her EEeEEeOo.”

Six countries in, here are our current rankings by ESC United editor scores:

What do #YOU think of “We Need Love”? Another “weird” Georgian entry, or do #YOU think Giorgi is the recipient of more “Ohmahgerd, why’s Georgia sending an “ethnic” song again?” patronizing? Let us know in the comments below, in our forum, or on social media.”