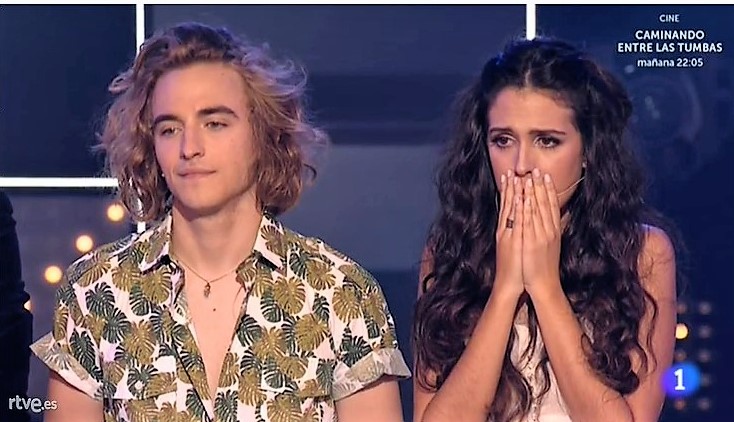 2017 seems to have certainly had its fair share of controversial National Final decisions. The first to really hit the headlines was the Spanish selection “Objetivo Eurovisión 2017” where the jury votes and the televotes ended in a tie, which was broken by the jury and resulted in the audience booing throughout the end of the show as well as accusations of nepotism. Then Slovenia selected Omar Naber despite a huge televoting preference for BQL thanks to the jury. Finally Sweden saw their third favourite from televote become their representative thanks to a strong showing in the international jury votes for Robin Bengtsson. All three results caused significant upset in the fan community. However, is it right to be so angry about these results? What is the ‘ideal’ system for a national final?

Let’s start with the easiest and most controversial selection: Spain. The voting was 50% televote and 50% from the three jurors watching the show and offering comments on the artists. In case of a tie, the jury would be the tiebreaker. Here, as in all three cases, the jury points were not changed in any way; in other words the final number of points was not converted to a 12-10-8-… style system. The jury voted and Manel had a clear lead with 34 points with Mario Jefferson in second with 25. The televote was, however, converted to a fixed number of points system (36-30-24-21-18-15). This meant that one extra televote could, theoretically, be worth an extra six points to the song. The televoters did not really agree with the jurors, putting Mario last and Manel third. This left him in a tie with Mirela, the televoters’ favourite. At this point, it was clear who would win, as Manel had been the favourite of two of the three jurors and indeed he was selected as the Spanish entrant to the Contest. This was met with booing and jeering from the audience in the studio who evidently felt highly upset that the televoter favourite had been overlooked in favour of the jury favourite. This article is not intended to look at the further controversy with regards to the jurors; the focus is on the selection process itself. If the televote points had been treated in the same way as the jury points and assigned proportionally, then Mirela would have won with 74 points in total (52 from the televote) against Manel’s 58 points (again 24 from the televote). Alternatively, the jury points could have been converted in the same way as the televote points had been. Interestingly, depending on how the tie between Mirela and LeKlein in the jury votes would have been resolved, this would have also given either a tie or a Manel victory.

We move across now to Slovenia and their selection EMA. Here the method was exactly the same as Spain’s, with the jury votes being (effectively) proportional, but the televotes converted to a 12-10-8… style system. Here again, the jury favoured one entry; Omar Naber’s “On My Way”, giving him 64 points, 8 ahead of “Flower In The Snow” in second place. The televoters, however, placed Omar second to BQL who had only come 4th with the juries. The 12 point lead in the televote did not overcome the 22 point lead Omar had with the juries and so Omar is going to Kiev. When the televoter numbers were released, however, it was revealed that BQL had two and a half times the number of televoters that Omar had; yet this was converted to a 12 point difference (72 and 60 respectively) between the two. Again, if the televote had been proportional, BQL would have won with a massive 149 points to Omar’s 106. Alternatively, had the jury points been converted, Omar would have won by an even larger margin (132 points to 108).So here we have two national selections where the jury favourite has beaten the televoter favourite, but that’s what happens at Eurovision too, right? Jury is 50%, as is televote, so it’s unsurprising that the televoters don’t always get their way.  So what is the problem then? Well, people like to feel that the televote has a major impact on deciding the winner of a national selection and watching their third place song lose out to the jury’s favourite, or watching a song with two and a half times as many votes as the next have that colossal lead wiped out by non-proportional voting, makes people feel as if there’s not much point voting. In some extreme cases, it even makes them feel as if the entire thing is rigged such that the televoters’ opinion is sidelined in favour of the jury’s thoughts. So how to resolve this?

One solution, which I’ve already touched on, is to make both jury and televotes proportional. This would have sent the televoters’ favourite in both Slovenia and Spain to Kiev. So surely this is the right way forwards? Well… There is, in fact, one country which has a proportional televote and still managed to cause a bit of a stir amongst the fans: Sweden.

Melodifestivalen: Traditionally regarded as a jewel in the national selection season, but this year, the winner, Robin, was the first to have not been the televote winner since 2013. The lead he had after the jury results had been announced was 20 points (96 points to 76) and the winning song in the televote only got 57 points as the televoting points were much less spread out than the jury points. The winner of the televote got 57 points, and last place got 30.

Compare this to the jury points where the winner got 96 and last place 1. This situation is the polar opposite to what you may expect with a proportional televote, as we see massive jury bias towards and against certain songs, whereas the televoting points are closely bunched together. For me, this is down to the “heart” app, which allows people to vote up to five times for each song, meaning that every song got a decent level of support which hugely dilutes the power of the televote. Also, having a 12 song selection naturally means that support will be spread among multiple songs, making it more unlikely that there will be a clear televote winner. But at the end of the day, it shows that even having both jury and televote proportional does not necessarily give a winner with which people can be happy.

So what is the solution? How should countries work out their voting systems to give a winner no one can complain about? Find out in Part 2 coming soon!

Were the selections really scandalous or did the right songs win? What do #YOU think? Share your thoughts with us below or on our forum!