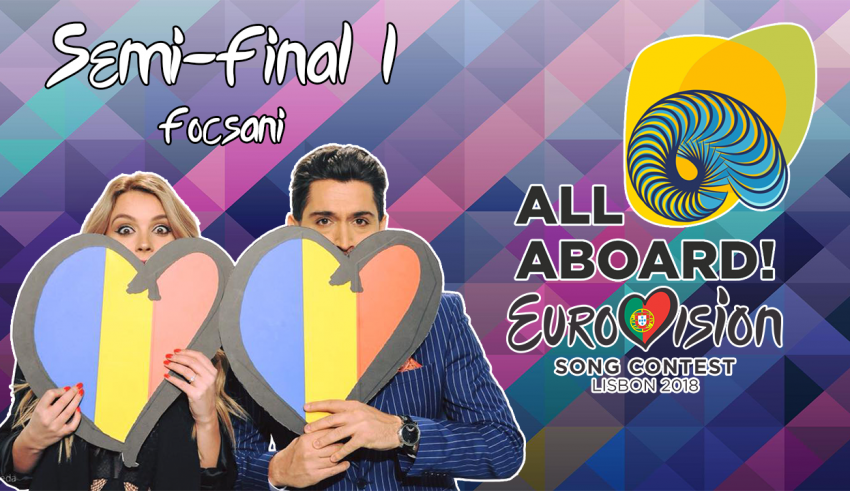 Bună seara Europa din Focșani! – We hope you are ready, beause tonight we just passed the first host city of this Romanian Eurovision marathon! The city of Focșani had the pleasure of kicking this tour off, and we now know the first 3 names that are ready for the big final in Bucharest on the 25th of February.

The first semi-final has just taken place in Focșani, Romania. Tonight, we had 11 acts competing for the 3 spots in the final. Originally, there should’ve been 12 competing acts, however Tom Hartis was forced to withdraw his song “Teardrop Rain” from the competition due to health problems.

Despite the unfortunate withdrawal, the show must go on! The show opened up with Luminița Anghel performing the song “Hora Din Moldova” alongside the Țara Vrancei Folk Ensemble.

After the heavy Moldovan influenced opening, we were welcomed by our hosts Diana Dumitrescu & Cezar Ouatu (Romania 2013).

The time had now come, and it was time to watch the 11 acts;

Among tonights semi-finalists, we had the pleasure to watch Alex Florea giving it another try for Romania, after he represented Romania last year in Kyiv with the song “Yodel It!“. Speaking about yodeling, we also saw Alexia & Matei performing a song written by the “Yodel It!” composer, Mihai Alexandru. We also saw the likes of Eduard Santha, who previous competed in Selecția Națională, this time with a romani influenced song.

As a reminder, during all the semi-finals, only the juries will decide who will qualify to the final. which will instead be solely decided by televote. In the jury we had the following 5 members:

The points were given in pure Eurovision style, with the highest ranked scoring 12 points, runner-up scoring 10 points, and so on. Each jury would give one set of votes, meaning a total of 60 points would be a perfect score.

After all the songs were performed, the time had come for a small break. The interval act consisted of the band Pasărea Rock, which consist of 5 Romanian legends performing a thirty-minute long recital.

After quite the long break and interval act, which Romania is getting quite famous for in the recent years of Selecția Națională, then we finally got a long awaited results!

After a fast announcement of all the votes, the top 3 acts were:

These 3 acts will now compete in the grand final that takes place in Bucharest on the 25th of February. Sadly the rest are eliminated from the show, which includes tonights fan favorite Alex Florea, who only managed to gather 28 points.

That’s it for this week, and next week we will be in the city of Timișoara – we’ll see #YOU then!

Did #YOU like the 3 who qualified, which 3 did #YOU hope to qualify and of course which 3 songs next week do #YOU hope will qualify? Share your thoughts on our forum HERE or join the discussion below and on social media!