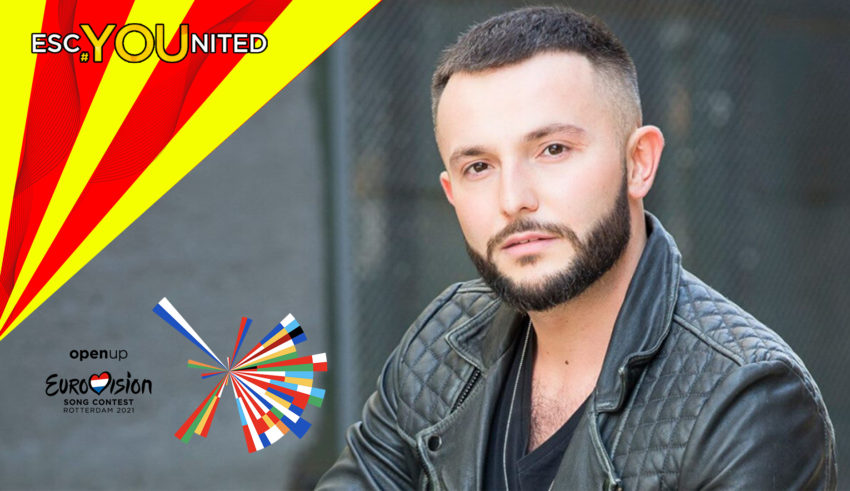 As the national final season has come to a close, we are about to witness a rather quiet time, as usually, pre-contest parties would normally take place around Europe starting at this point. However, not all is all good and clear as one would like to think, and it would seem like that the drama has now reached North Macedonia.

Has a war started? Are lives in danger? No… it’s all because of the music video for the North Macedonian song. Last week, North Macedonia’s representative Vasil Garvanliev, finally dropped his Eurovision Song Contest entry for the 2021 contest, and something unfortunate appeared in that video(See picture).

The entire controversy is about what appears to be something that represents a “Bulgarian Flag”.

This unfortunate shot in the music video led to huge backlash within North Macedonia, to the point, where the national broadcaster MRT decided that a “Re-evaluation” would take place, about North Macedonia’s participation in the upcoming contest, to be held in Rotterdam.

To most of our readers, this might seem like something that is absurd and pointless, and even as far as ridiculous that such an error in the music video, could potentially lead to a country withdrawing. Yet, there’s clearly a reason of all of this trouble, which we’ll get into in a bit.

However, this is clearly something of importance, considering that it has gotten to this point, since the release of the now deleted music video. An online petition was created, which within hours gathered thousands of signatures, and is still rising in the numbers. This easily becomes a huge deal in a small country as North Macedonia, especially when the question is about national ethnicity.

As mentioned, we would get into the explanation about the entire deal. Most Eurovision fans that have followed the contest closely already know about the problem the country already has with Greece, regarding the name of the country. However, the deal with Bulgaria is about ethnicity among the people of North Macedonia.

In short, North Macedonia was part of Yugoslavia until it dissolved, and became an independent country in 1991 (yes, I know, North Macedonia has a long history, but that’s not the main point right now). Already when North Macedonia declared independence from the breaking Yugoslavia, they were already dealing with the trouble of the name of the country. Back then, the country became known as “Macedonia”, which upset the Greek ever since, due to the historic meaning of the general word “Macedonian”. (As in we go all the way back to Alexander The Great)

Anyhow, when North Macedonia broke away from Yugoslavia, it was relatively done peacefully(Slovenia got away peacefully as well), since the people of today’s North Macedonia, never really was identified as Serbs, Croats, or Montenegrins as most of the former Yugoslavia consisted of. The first nation to even recognize the independence of North Macedonia back in 1991, was Bulgaria!

This is where the ethnicity comes into question, since both North Macedonia and Bulgaria are slavic speaking nations. The languages of the two countries are quite similar, and this is where it get’s ugly, since Bulgaria claims that the citizen of North Macedonia pretty much are in fact Bulgarians.

(Quick disclaimer: I, the author of the article, don’t wish to upset anyone. I took as many pre-cautions as possible while going into detail about this, and checked multiple sources when writing all of this. The goal of the article was to shed some light into the conflict, rather than causing any sort of conflict.)

So now, we know the basic of this entire problem. Which pretty much is about the ethnicity of the people of North Macedonia. This is now where Vasil Garvanliev gets into trouble. The music video of his entry in the 2021 contest “Here I Stand” was filmed in the “National Gallery of Macedonia” in the country’s capital, Skopje.

The so-called “Bulgarian flag” incident was not even meant to depict what people would then go on to claim that represents a “Bulgarian flag”, which has then led to many viewers believing that the background art was actually re-arranged so it in fact did look like a Bulgarian flag. How so? Because Vasil Garvanliev himself has said that he in fact also has Bulgarian citizenship.

Now finally, we’ve gotten to the point then, where people of North Macedonia don’t wish to be represented on the big stage, by someone who “isn’t” from North Macedonia. Vasil himself has even responded to all this as well on Facebook with the following message:

Should a solution be found, and should North Macedonia decide to remain in the competition this year, then Vasil will represent the country in the 1st half of the first semi-final with his song “Here I Stand“. The Head of Delegation meeting has already taken place, so a replacement song and act would most likely not be a possible option at this point.

Now that #YOU‘ve gotten the entire explanation, what do #YOU think about this situation? Let us know about it on our social media platforms, or #YOU can join us on our forum right HERE