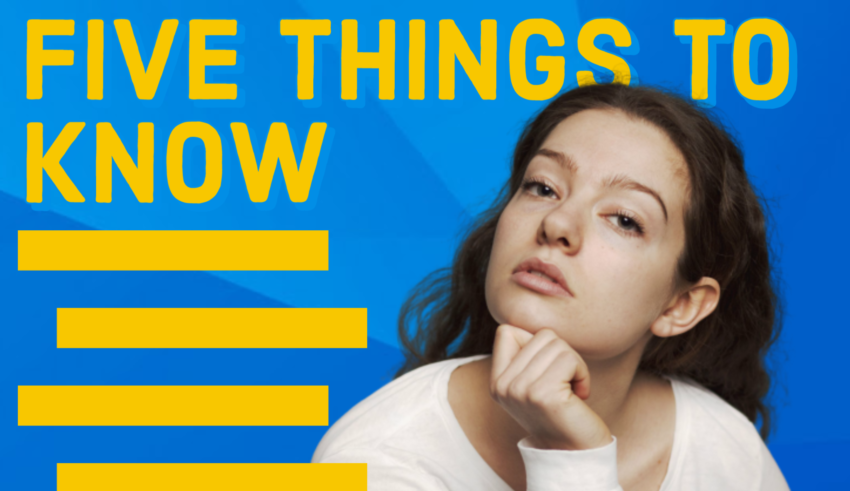 Earlier this week, Greek broadcaster ERT announced Amanda Tenfjord will represent the nation at next year’s Eurovision Song Contest in Turin. So what should Eurovision fans expect from the multi-talented 24 year old? Here are five things to know about Amanda Tenfjord:

Amanda Tenfjord was born Amanda Georgiadis in Ioánnina, Greece. At the age of three, her family immigrated to a Norwegian village outside of Ålesund. The name of that village is Tenfjord, later the inspiration for her stage name. It was there that she began taking vocal and piano lessons, eventually graduating to writing her own songs at age 16. The first song she ever wrote, “Run”, was also her first released single.

Tenfjord, who still speaks Greek fluently, never lost touch with her cultural roots. Growing up, she returned to Greece at least once every year to visit her grandmother and soak in the country’s culture and sound. The blend of Norwegian and Greek folk music Tenfjord was raised around gives her music a unique texture.

“What I love about the old Greek music is the powerful lyrics and strong melodies that don’t need a lot of fuss around,” she said in a 2018 interview. “I won’t say that you necessarily can hear Greek vibes in my music, but I always have in mind that less fuss and more feelings is what I want. Cause that’s what it’s all about I think – feelings.”

That stripped back, humanistic approach to songwriting has typified most of her back catalog, though her newest single, “Promises”, recorded with Norwegian singer-songwriter Thomas Dybdahl, shows her experimenting with a more electronic sound.

Tenfjord grew up playing football and was always an active kid.

In 2015, as her music career was beginning and she was preparing to head to university, the then-18-year-old won her local 5K marathon, setting a new track record time for women at the event.

Hopefully, this is a good sign that she has the stamina to withstand the 6-month Eurovision marathon ahead.

She Has Major Music Cred

Tenfjord doesn’t come from a musical family, but she has pedigree all the same. Ålesund was a bit of a pop music breeding ground during her school years. She attended secondary school with Norwegian music superstar Sigrid, and the two shared the same vocal coach. That vocal coach, Solveig Håvik, is the mother of another Ålesund-grown music artist. Håvik’s daughter, Ingrid, is the frontwoman of well-known indie pop-rock band Highasakite. Tenfjord would go on to open for the band during a 2019 tour.

“There are a lot of talented people in the music community in Ålesund,” Tenfjord said in a 2017 interview. “A lot of exciting things are happening there.”

She’s a ‘Germ Warrior’ … in More Ways than One

At 18 years old, Tenfjord began studying medicine at a university in Tronheim. As her music career was slowly blossoming, she continued her studies.

But just because she was hitting the books doesn’t mean she wasn’t exercising her music muscles. In addition to performing at festivals and recording music during that time (see below), she was also a founding member of Flu Fighters, a cover band made up of local medical students.

You can watch a short (and I do mean short … don’t ask me how long it took me to find this) video of the band performing at a school event here.

In 2018, she took time off of school to focus solely on her music career, returning to medicine after a year break. She spent the majority of the pandemic interning at a Norwegian hospital that specializes in the treatment of Covid-19.

Starting at the age of 16, Tenfjord began playing local shows, working her way up to performing at music festivals and gaining the attention of the Norwegian music scene.

In 2015, she won Musikkprisen, an annual Norwegian music competition for up-and-coming talent. In 2016, she reached the Top 30 singers on The Stream, a Norwegian TV talent show, and performed her song “Man of Iron” in the showcase round.

In 2017, she was selected to receive a TEFT scholarship from Sparebanken Møre bank, an annual stipend given to Norwegian artists to help develop and support their work. That same year, she was one of the winners of a cash prize at the by:Larm music festival in Olso. She received attention from international publications like NME. By 2018, her songs has racked up over a million streams on Spotify. And all of this was done without major label backing.

At a showcase in 2017, however, Tenfjord was scouted by an rep from Propeller Recordings, the record company she is signed with to this day. With Propeller’s backing, she released her first EP, First Impression, in 2018. Over the next year, she performed at several major music festivals across Europe, including Eurosonic in The Netherlands, The Great Escape in The UK, and Iceland Airwaves.

Her career got another boost in 2020 when Netflix figure skating series Spinning Out used her song “Troubled Water” to underscore a training montage in the show’s 10th episode. You can view that scene below.

Her newest EP, “Miss the Way You Miss Me” was released earlier this year and contains probably her most popular song to date: “Then I Fell in Love”. The song, which currently has over 1.5 million streams on Spotify, spent 20 weeks on the Norwegian Top 10 music charts and was played by radio stations across Europe.

Are #YOU excited about Greece’s choice this year? Were #YOU already a fan of Amanda Tenfjord? Do #YOU have a favorite song in her back catalog?  Sound off in the comments below, in our forum, or on social media @ESCUnited.