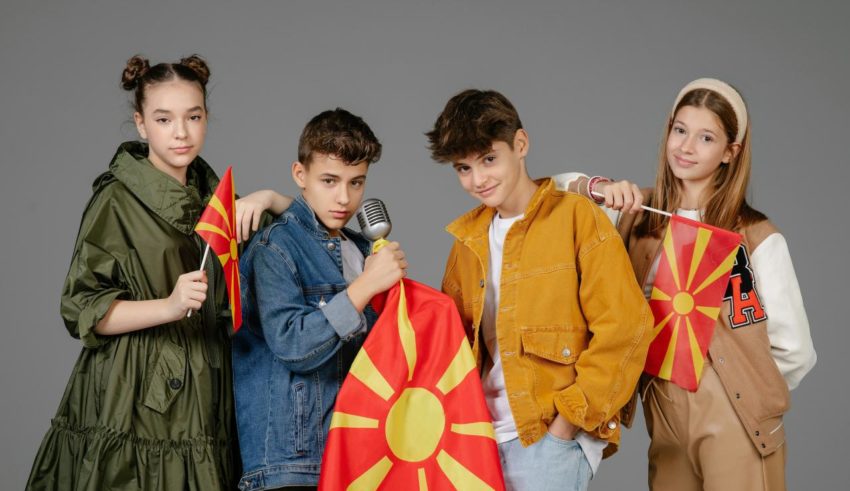 It’s 3 days to go until Junior Eurovision 2021, and we are counting down the 19 nations participating in Paris on Sunday, December 19, 2021.

North Macedonia have entered every edition of Junior Eurovision with the exception of 2012 and 2014. Their debut entry, “Ti ne me poznavaš” by Marija and Viktorija. It came in 12th the inaugural contest. North Macedonia would place 12th a total of 8 times out of 15 appearances (53%!).

Okay, that introduction sounds glib. To be fair, these kids are on North Macedonia’s most popular and viewed children’s variety show, and their antics and performance in Paris will be closely watched.

Rather than going the Dutch route and assembling a group just for Junior Eurovision, North Macedonia assembled a unit whose members already work together professionally.

Adults. What pesky beings they are. Treating our Earth like a toilet and leaving it for the kids in such a shabby condition.

Anyway, these kids are alarmed at the environmental devastation they perceive, from wild fires to pollution to global warming, and want to group together to do something about it.

Composer Robert Bilbilov is a musician and producer in his own right, however most will recognize him as the son of Hilmi Bilbil, the famed composer of “Biser Balkanski” (“Balkan Pearl”). Robin Zimbakov, who also works with the kids on the TV show, is the lyricist.

With the background out of the way, here is what we at ESC United think of North Macedonia’s entry for Junior Eurovision 2021.

Boris – 6 – “The type of song that sounds boppy at first, and then on consecutive listens gets caught up in its own repetition. Like… this song could be good but it drags on five-ever. Whoever shaded Balkanika back in the day was wrong. *This* is what a “Balkan MegaMix III” sounds like.”

Connor – 9 – “Now when the news broke that North Macedonia were sending the kids of a popular kid’s show to Junior Eurovision, I was super skeptical. However, when the song came out I immediately changed my mind. Not only does it fit in with the eco-friendly vibe of the last few contests, but it is also a great dance pop song, has cultural elements mixed into it, and I can only hope they have the stage presence to carry it off live!”

James – 6 – “The lyrics are as subtle an environmental message as Saw is an indictment of American healthcare. But like with child Christmas carolers, you feel churlish berating their message and you look past it. The song has great energy and instrumentation that makes it uniquely Balkan, even if there are parts that are quite repetitive and you sometimes feel that the track is a little too busy.”

Melanie – 7.5 – “Really love the instrumentals in this one! The beat is amazing, and the visuals in the music video are promising for what they’ll bring on stage at the contest in Paris. Most important part for Dajte Muzika is that they can bring the energy that we’re seeing in the music video on their stage show. If they can take care of that the instrumentals don’t feel flat in Paris, I can see this doing well. Otherwise, this can crash very hard during the show. Fingers crossed for an excellent performance of these youngsters.”

Roy – 8 –  “YES, this is the one! This is the song that is my personal favourite of this year! The way you smoothly roll into the chorus is absolutely lovely and the drop after the chorus is insanely well done. It feels very Balkan, it feels very different, yet it also feels like it belongs there. The vocals fit smoothly on the track as well and every single puzzle piece makes the whole piece feel smooth as butter. Obviously, there are issues! I am very scared for the live performance of this song. If I understand correctly, it are multiple juniors singing with 1 guy standing out the most. All those voice need to perfectly slot into the very smooth production of the song. 1 vocal that is too loud or not fully in tone and the overall feeling of the song could already fall a bit flat. Very risky choice for North Macedonia this year, but I definitely hope it pays off!”

Stefan – 9 – “I think we all agree this is the best entry of FYR/North Macedonia. Even though “Save the Earth” was the silent theme of JESC 2019, I don’t mind having a song with the same message again. The kids now to sing, so I am hoping they will have a good performance so they can bring back home a new best result.”

Tyler – 9.5 – “The instrumentation and music of the song itself is quite good, and not even paying attention to the lyrics (sung great by the group Dajte Muzika), leaves the listener wanting more after the song is over. “Green Forces” isn’t just a song about climate change, it’s a call to action anthem of an issue directly affecting the youth that will watch this show. It’s direct and blunt and ready to make a statement in Paris this year, and the contest is better for having it.”

William – 6.5 – “These kids are PROS, with ATTITUDE for days. Not sure we’re getting much juice out of having four lead singers, though. The track is a little overstuffed with voices, and it’s at high risk of looking cluttered on stage … think Eye Cue, “Lost and Found”, at Eurovision 2018. The video and audio mix seem to heavily emphasize the boy who I believe is Miha? I’m guessing the plan is to make him the de facto lead performer on the night? Not a terrible way to go. Loving the ethnic elements. Staging will make or break this one, I think.”

Seems like a strong contest so far, as eight of the 13 countries reviewed have an average above 7. This is one of those entries that most reviewers agree will need a live outing to ascertain whether it soars or crashes and burns.

Thirteen countries in, here is how ESC United has the entries ranked.

What do #YOU think of North Macedonia’s chances? Will the Green Forces recruit #YOU to their cause, or will they crash and burn in Paris? Let us know in the comments below, on social media, or in our forum.