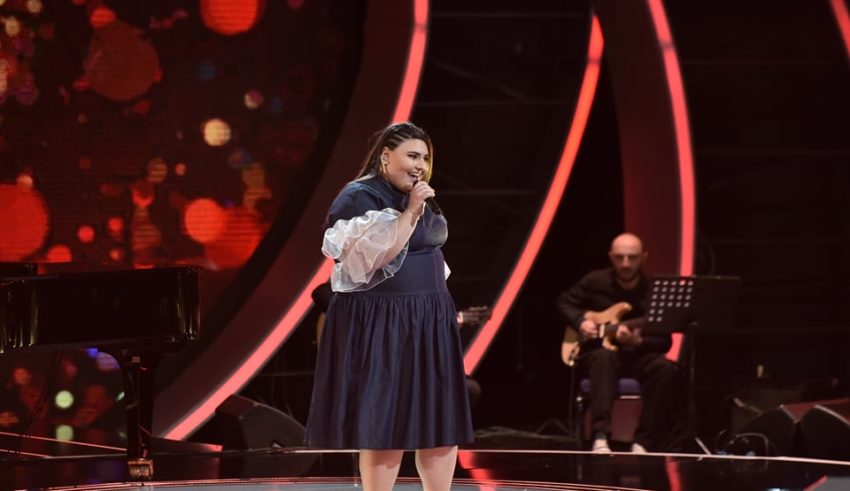 It’s two in a row as last week’s victor Tornike Kipiani won the 3rd elimination week of Georgian Idol. In a contemporary Georgian classics themed episode, Kipiani won 21.17% of the televote with his cover of Genetic Code’s classic “Artificial Love.”

Nika Kalandadze, whose twin sister Liza won an elimination round in last season’s Idol with her cover of “Artificial Love,” was eliminated with 9.53%. Mariam Gogiberidze was the other outsider, though narrowly escaped with 9.91%. As with last week, the margins were very slim, with only 0.1% separating 7th place Gogiberidze and 4th place Anri Guchmanidze at 10.01%.

The third round results are, with percentage of votes and songs embedded in the song title, as follows:

The battle of the Queens was an interesting one this week as Samkharadze overtook Kakalashvili for the first time, though neither has finished outside of the top three to date. Both have the opportunity to overtake Kipiani in next week’s Andrew Lloyd Webber themed episode, as both have nailed popular numbers from musicals and there is no obvious number in Webber’s catalog that suits Kipiani’s strengths. But if Kipiani can nail a Webber number, the spot in Rotterdam will truly be his to lose.

Hosted by Ruska Makashvili, Star of Georgia or Georgian Idol is the Caucasus nation’s version of the Idol franchise. It is the second straight year the show will serve as the selection method for Georgia’s representative and song at Eurovision 2020, to be held in May 2020 in Rotterdam, the Netherlands. After tonight, the remaining seven will be eliminated one by one by viewer votes until the Grand Final.

Noticeably absent from this week’s episode was judge David Aladashvili, which provides a segue way into the next topic: David Aladashvili has just been named as the host of the next season of Ranina, whose first auditions were held today in Tbilisi.

A large amount of young hopefuls showed up to show off their skills, hoping to be one of the ten young finalists picked for the third season of Ranina, Georgia’s method of selection for their artist to represent them at Junior Eurovision 2020.

It was announced by TV-1 before Junior Eurovision 2019 that Georgia would participate at Junior Eurovision 2020, with the first auditions held today, only six days after the last contest. Despite Giorgi Rostiashvili’s “We Need Love” being Georgia’s lowest ever placing at Junior Eurovision with 14th place, the popularity of Ranina in Georgia and Giorgi himself guaranteed another year of Ranina. The result has, like Oto Nemsadze’s “Keep on going,” been largely attributed to “foreigners don’t get it” in Georgia, with more emphasis being placed on creating a quality song that Georgians will love in a reality show format that will entertain.

A raft of young Georgian hopefuls were introduced today on Ranina’s facebook page, so keep an eye out and we shall see if any of these kids end up being among the final ten.

Is Tornike Kipiani impressing #YOU, or do you think one of the two Queens will overtake him? Do #YOU think Kalandadze’s elimination was harsh? Let us know in the comments below, on social media, or in our forum.