Home 2018 Eurovision In Concert – View From The Audience 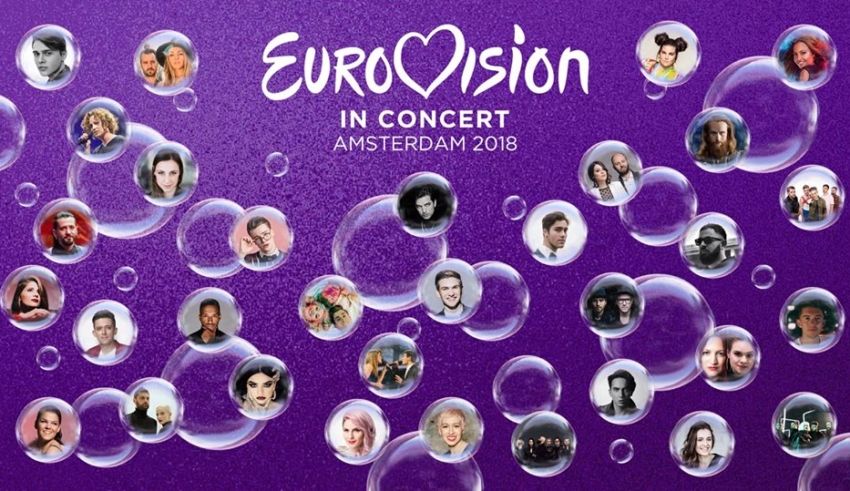 Last weekend, over three quarters of this year’s Eurovision acts headed to Amsterdam and the AFAS Live arena for the tenth Eurovision in Concert. I’m sure many of you will have seen their performances online and assessed how the different artists performed live as well as seeing what they got up to in Amsterdam whilst they were there. However, one thing that’s often maybe forgotten about is the actual fan experience of going to a Eurovision preview event. Well, look no further as I had the good fortune to be in the crowd for this year’s event, alongside three of my fellow editors!

A quick bit of background first; I saw the 2016 Grand Final live in Stockholm, but that was my sole live Eurovision experience until last weekend. I should also say that I do not frequent live music events particularly often, so apologies if I seem to be getting excited about things which seem perfectly normal to you!

My first reaction on entering the arena was “WOW, HOW MANY PEOPLE ARE HERE?!” And it really was packed! The arena can hold 5500 people and I’m sure we were pretty close to that. Instead of joining the ‘mosh pit’ (as I am reliably informed it is called), we headed to the standing area behind the bank of seats which, although far from the stage, afforded a fantastic view with no one standing in our way, although it did have the tendency to be in the spotlight from the extremely bright stage lights a little too often! The show was hosted by the Dutch 1998 and 2007 entrant, Edsilia Rombley, and Cornald Maas, who has commentated on the event a number of times for Dutch television. They did a great job of getting the show moving and soon we were off with the first act.

One of the things which really struck me during the Concert was that the feeling in the crowd is quite different to that at the actual Contest. There is a much stronger sense of camaraderie within the audience, with a lot more positivity for the performers. I suppose that the absence of a winner possibly contributes to this, but it made the whole thing feel a lot more relaxed and less intense than going to the Contest felt back in 2016. The crowd reactions overall fascinated me however. As you should know, ESC United has an ‘Expert’ Panel this year and as part of this we have been asking #YOU to rate each song out of ten as well to give each song a ‘televote’ score. 24 of the entries we have looked at so far were on stage last weekend, so I have looked at how the audience reaction compares to the song’s televote score in the ‘Expert Panel’.

Overall the results tie up quite well: The best reactions on the night were for Israel, Bulgaria, the Netherlands, Czech Republic and Spain. Israel and Bulgaria are currently 2nd and 4th respectively, with the Netherlands in 6th (although who can be surprised that Weylon got a superb reception in his home country?) and Czech Republic in 7th. Spain is a slight anomaly as it is 13th in our poll, but Spanish fans are widely known to be some of the most passionate fans for their home entry every year, so it is little surprise that they were cheering Amaia and Alfred on so strongly! Iceland, Serbia, San Marino, Moldova and Lithuania got the quietest reactions, which again roughly correlates with our televote poll, although Iceland and Lithuania were a little highly rated for the muted reaction they got, which could be of concern to them going forwards.

Another country which could possibly be a little worried is Macedonia. Currently lying 5th in both the overall and the televote rankings, Macedonia’s reaction was lukewarm at best in the Arena, which could foreshadow difficulties when it comes to Lisbon in just a few short weeks. There was, however, hope for Malta as they languish near the very bottom of our televoter ranking in 22nd: they got a fairly good audience reaction in the arena, so perhaps there is more support out there for the song than our ranking currently indicates!

So what else? Well, on a personal level there really is nothing like seeing the acts live. One of my least favourite songs this year is, possibly controversially, Israel. I gave it a whole one point on the ‘Expert’ Panel, yet seeing it performed live… Well, I was definitely tapping my feet to say the least. It just started to work better somehow! The song draws you in more than just seeing it on a screen. Other editors were finding the same thing with others songs of which they were not originally hugely enamoured – with Hungary being a particular standout in this regard!

To conclude, therefore, I can heartily recommend trying to get to one of the pre-Eurovision events if you possibly can! You get to see more acts than you would at a Eurovision semi or final (we saw 32 acts, whereas the Grand Final will ‘only’ have 26). You also get to focus more on the song and the singer(s) than you would at Eurovision as the staging is minimal, so it gives you a more intimate understanding of how they approach their entry. You also get to see things you’d never see at ESC! San Marino’s entry began with the wrong music, prompting quite the glare from Jessika! Emilie was sadly unwell, so SuRie stepped up in her place for an English version of “Mercy” (as Jean-Karl put it “I have found another Madame for tonight”!). We also saw Equinox joined by Kristian Kostov, Bulgaria’s entrant from last year, to perform “Bones”. It was a really special evening and well worth the trip to Amsterdam! Hopefully next year I’ll be there once again – and maybe #YOU will too!

Which pre-Eurovision event would #YOU like to attend? Share your thoughts with us below or on our forum!