Home 2022 Czech Republic: Five Things to Know About We Are Domi 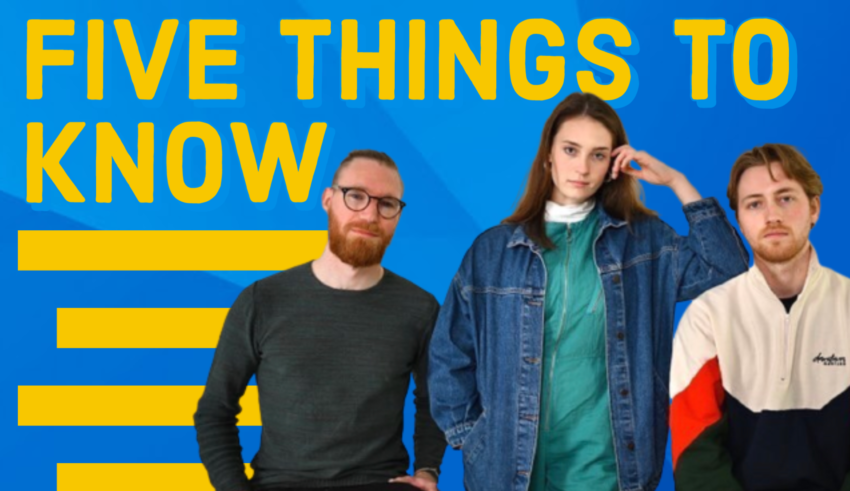 Last week, Eurovision fans around the globe selected We Are Domi’s “Lights Off” to represent Czech Republic at next year’s contest in Turin. The band consists of keyboardist Benjamin Rekstad, guitarist Casper Hatlestad, and lead vocalist Dominika Hasek. But how did We are Domi get here? Here are five things to know about the electropop trio:

Watch Connor’s interview with the band, filmed a few days before the winner of ECSZ was announced, here.

One School Recital Started it All

We are Domi, previously known as simply ‘DOMI’, began as a project at Leeds College of Music in The UK.  The band’s origin dates back to 2015, when Czech Dominika met Norwegians Casper and Benjamin at a Halloween party and asked them to provide backing for her school recital. Eventually, the trio were joined by two additional founding members: Norwegian drummer Jostein Braaten and British keyboardist/backing vocalist Jemma Freese, both fellow students at Leeds.

The band began releasing singles in 2019. Its first two releases, “Let Me Follow” and “Wouldn’t That Be Nice” performed very well on both streaming services and the Czech music charts, no doubt in part due to Dominika‘s involvement.

For geographical reasons that will be discussed below, ‘DOMI’ lost two members in its transformation to We Are Domi. Luckily, it seems like there are no hard feelings from the two absent members. Jostein Braaten played drums on the studio recording of “Lights Off”, and Jemma Freese congratulated the trio on social media after they were announced as the ESCZ winners.

OMG YES! My good pals @WeAreDOMI are officially going to be in EUROVISION! Their song Lights Off is incredible, congrats guys! Xxxxx https://t.co/0oZnkxVy5T

Freese has had her own fascinating, inspiring journey over the last two years that is well worth looking into. You can read all about it here.

Covid Brought Them to Czech Republic

After graduating from Leeds College of Music in 2019, the plan had always been for the group to move to London and continue performing there. 2020 had other plans. The Covid-19 pandemic hit The UK hard, and the subsequent lockdown found the band out of work and unable to play live concerts.

Dominika, Casper, and Benjamin decided to leave The UK and uproot the band to Czech Republic, Dominika‘s home country. Covid-19 had not hit the country as hard as it had hit The UK, and live performance venues were still open. Additionally, as discussed above, the group had a vibrant Czech fanbase and had been performing well on the country’s music charts. Though Czech Republic went into lockdown shortly after the trio’s arrival, they decided to stick it out. Since then, they’ve been recording and, when they can, performing for local audiences. They released a new single, “Come Get Lost”, earlier this year.

Dominika was Born in the Spotlight

Dominika‘s father is legendary professional hockey goalie Dominik Hasek, who, in his time playing in the National Hockey League, won several MVP awards and the Stanley Cup. He also won a gold medal at the 1998 Olympics in Nagano as part of the Czech national hockey team. He returned to the medal podium in 2006, winning a bronze medal in the same event at the Olympics held in … Turin, the city hosting next year’s Eurovision Song Contest.

Because of her father’s hockey career, Dominika spent her early years living in The United States, before her father retired from the league in the early ’00s and moved the family back to Czech Republic.

Dominika‘s first taste of her own spotlight came at the age 15, when she competed on the first season of Česko Slovensko má talent. She reached the finals but lost to a pair of shirtless male acrobats. You can view her audition below.

Dominika‘s time on Česko Slovensko má talent generated a few modeling offers, but she turned them all down, stating her dream was to record an album. And, soon enough, she was off to Leeds College of Music, where her path would lead her to two talented Norwegian musicians.

Casper and Benjamin are Prolific

Casper and Benjamin hail from Norway and met at a Folk High School in Stavanger. They later applied to Leeds College of Music, where both would receive master’s degrees. The bow guitar Casper is seen playing in the “Lights Off” video was his master’s project.

While attending Leeds, ‘DOMI’ was not the only music project Casper and Benjamin worked on … not by a long shot. Casper, in particular, had his strumming hands full. In 2015, he toured Scandinavia in the backing band for pop-rock duo Olga. In 2016, he made up one-half of Norwegian folk duo Sincerely, Frank, touring Norway and The UK and releasing an EP that same year.

Skogmus, a ’70s-style rock band Casper co-founded in high school and Benjamin later joined, also followed the pair to Leeds. The other two members of the group moved with them to The UK, and the band was touring and releasing music up through 2016. But that’s not all, folks. From 2017 to 2018, both Casper and Benjamin (along with former We are Domi member Jostein Braaten) were part of jazztronica act Wardrobe Quintet. Made up of Norwegian students at the Leeds College of Music, the group released two EPs and toured Norway.

Since moving to Czech Republic, Casper and Benjamin have remained as busy as ever. In addition to the time they’ve devoted to We are Domi, both men have worked as music tutors at Prague’s International School of Music & Fine Arts.

The Torch was Already Passed to Them

Lake Malawi, the band that earned Czech Republic its second best ever Eurovision result in 2019, invited We are Domi to guest on an April episode of Little Friday Sessions, a regular live streaming concert event sponsored by TCL Electronics. In introducing the group, Lake Malawi lead singer Albert Černý lavished We are Domi with praise, calling them:

It was at this gig, after hearing the members of Lake Malawi talk about their fond memories of Eurovision 2019, that We are Domi decided to submit a song for the Czech selection. You can watch the entire session, including Lake Malawi performing “Friend of a Friend”, below.

Did #YOU vote for We are Domi in the Czech selection? Are #YOU nervous/excited about how Czech Republic will stage “Lights Off”? Sound off in the comments below, in our forum, or on social media @ESCUnited.