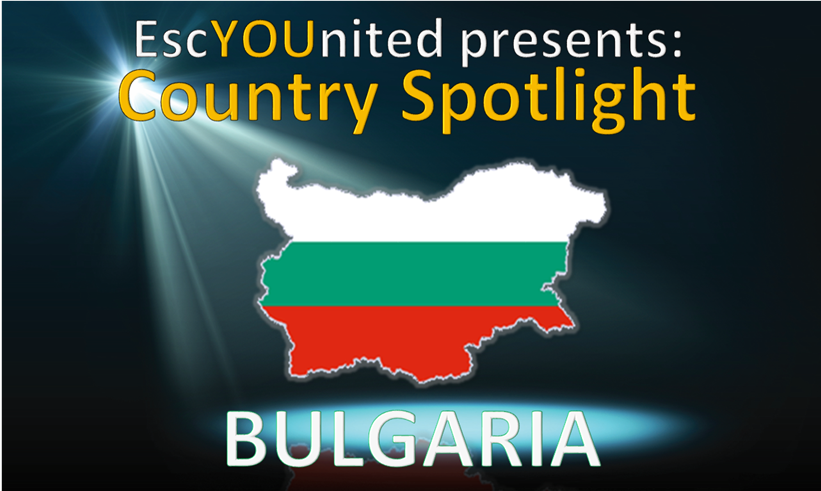 Once again it is time to scrutinize the odds of another Eurovision hopeful. This time however, we have to be careful – this week we are examining a country prone to brilliance and innovation, but also a wee bit of grandomania. Maneuvering ourselves through high ambition and even higher egos, the next country to cover is none other than Bulgaria.

Through the country spotlights I’ve written so far, I have mentioned the importance of established rebranding. The Czech Republic and Azerbaijan completely reinvented themselves. Belgium’s strategy to recruit Hooverphonic turned them into slam dunk qualifier material, even with the song being unreleased. Conversely the lack of an operative reputation is a large hindrance for both Spain and Poland.

However, when it comes to rebranding no one has the Bulgarians beat. At the moment, they are a country nearly everyone is excited for. This is in stark contrast to only a few years ago – The Bulgaria of the ’00s and early ’10s feels like a very distant memory, buried in the dusty archives of Eurovision.tv. Let us unearth the past so we can look at the present and future, shall we?

I have a confession to make, but I really liked the Old Bulgaria. Perhaps I’m biased – my mom’s Bulgarian, after all (for those wondering why I have a name Belgians tend to associate with klutzy drunks, mangy dogs and circus bears – basically yours truly in a nutshell), but for a large part it was because their old entries were special snowflakes which unabashedly channeled Bulgarian culture – a culture I myself am fairly familiar with and therefore am prone to empathize with.

For the average European however, their entries came off as aloof and weird in the best circumstances. Contrary to grumkin belief, Eastern Europe fared well in the late ’00s not because of ‘block voting’ or because they were in cahoots against the west and other codswallop Wogan’s wetnurse has warned you about. Eastern Europe flourished they took ESC seriously, producing entries that were significantly better on average than the Western ones. (who treated ESC as a joke, may I remind you of Scooch?)

Overall, Bulgaria’s discography wasn’t too bad – certainly underrated for the most part, but despite coming from this ~Universally Successful Part of Europe~ they still struggled. Some Bulgarian entries, such as “Love Unlimited” (2012), “Na Inat” (2011), “Samo Shampioni” (2013) and “DJ, Take Me Away”(2008) were lowkey brilliant but strayed too much off the beaten track, while others such as “Illusion” (2009) and “Angel ti si” (2010) were laugh-inducingly bad, if not worse.  Neither trope equates to consistent qualifier material, especially in a field that rewarded lightweight uptempo bangers, thus relegating Bulgaria to the garbage tier.

And then… by some magical stroke of luck:

THEY WILL NEVER BREAK US DOWN

WHEN EVERYTHING IS ON THE WIRE

GOES DEEP INSIDE YOUR SOUL

Suddenly, out of nowhere came a streak of three songs all of which were deemed possible contenders for the win upon release. All three of them qualified for the Grand Final without a hitch All three of them were top five in the betting odds. Two of them also reached the top five, again without seemingly breaking a sweat.

So what ran the axis around which this sudden surge spun? The answer is simple: marketing.

All three of these entries were doused in hype weeks before their release. Poli Genova, as you may remember, established herself as a diehard darling with her wonderful JESC hosting stint in late 2015, which allowed BNT to milk her internal selection until the very last moment. Once BNT finally released “If love was a crime” -a composition by the now ubiquitous but then unheard of Symphonix mill- it became an instant hit, and rightfully so (lgbtq empowerment anthems <333). The result was a jolly fourth place in Stockholm, Bulgaria’s best result at the time.

BNT would later repeat the same with Kristian Kostov and Equinox, and this is where the magic of rebranding really shines. You see, I chalk these successes up to marketing because I don’t believe the new Bulgarian entries were as good as advertised. While I looooooooved “If love was a crime” (because it’s programmed in my genetic gay code to stan all things Poli, okay)  I am also of the opinion that “Beautiful mess” and “Bones” are lowkey bad. The Kostov ballad borrowed a LOT from Dami Im’s “Sound of Silence” (another deceptively weak composition people glommed onto simply because of the Dami Factor – Dami was great, but that song ain’t no Gladiator) – so much that my besties and I instantly concluded, and individually from one another, that Kostov would finish second place in Kyiv.

Meanwhile “Bones” was an entry I have a lot of irony-fueled appreciation for, mostly because the infinite enjoyment Equinox brought with the form of dank electronic beats and infinite tumblr sh*tpost material. I mean, this was the description of their profile vid:

Of course, irony as irony does, Equinox marked the zenith of Bulgaria’s ambition and the nadir of their hubris. My pet theory is that everyone lowkey realized “Bones” was just a lightning rod to maintain hype while simultaneously directing attention away from the actual ESC winner Bulgaria were breeding in their Symphonix laboratory, but it took until the semifinal to openly admit that this Four Gays And A Morlock act was kinda highkey trash, yo. My personal Aha-Erlebnis came when Trey failed to muster a coherent explanation behind his own composition during their London interviews, even the interviewer – the ever helpful and chummy William Lee Adams  – handing him plausible answers on a silver platter.

Anyway, the theory I am positing here is – if we operate under the false assumption that ‘quality’ is a sliding scale and not a completely intuitive and subjective parametre we retroactively rationalize to not look like utter prats in front of our peers – then yes, Bulgaria’s entries have gone up in ‘quality’, but not because these entries were particularly better than anyone else’s.

What has gone up, by a drastic amount in fact, is the way Bulgaria have been presenting their entries.  BNT outsold, quite literally.  They injected a lot of care and resources into their Golden Three, leading to three easy qualifications for a country that had reached the Grand Final only once before. It wasn’t the songs that carried Bulgaria, it’s what Bulgaria did with them.

Indeed, it would seem that ~*~*VICTORIA*~*~ could very well continue these successes. It is currently unknown who the anonymous maecenas that dragged BNT out of their financial morass was, but given Symphonix’s proneness towards hilarious extraness (cf.: Victoria’s profile vid which does nothing to showcase her musical talent), they are my guess. Which would be good for Bulgaria’s chances as Milanov & Company too have experienced a streak of their own at ESC. Poli, Kostov and Cesár mark 3 top five placements in a row, while Chingiz scored a surprising eighth place last year. It’s not a question whether Symphonix will get another top 10 in 2020. The question is what country they’ll be getting it with.

What Bulgaria taught us, more than any other country, is the importance of reinventing yourself when you’re considered stale or mediocre.  We live in a digital age and presentation can create as many opportunities as a good composition can. We’re five months ahead of rehearsals Victoria already has the diehard fans eating out of her hand, simply based on the potential everyone believes she may have. I can’t blame them. It is very difficult not to fall into the stanning trap BNT have set.

It is therefore of paramount importance for Bulgaria to fulfill these high expectations they’ve been sowing in our camp-loving hearts. Fail to do so and the hype train will completely derail itself and crash, like it did with Equinox. Fulfill them too aggressively and they’ll succumb to the same overdog syndrome that lamed Gabbani and both Lazarev entries.

When I started this series, I didn’t consider Bulgaria as a possible returnee, let alone a contender for the gold but yup, here were are again. Bulgaria are back to their usual shenanigans, lurking in the forefront as a self-dubbed Dark Horse. It really would seem that old habits brand hard.

Next up: I attempted a poll on our message board to decide the next country – the poll itself flunked, but there was some interest towards Albania and Slovenia so… I will do one of them next. No, I won’t spoil who, you’ll have to find out next week!

Do #YOU agree with Boris? Did #YOU enjoy this editorial? What do #YOU think of Bulgaria’s chances at the upcoming Eurovision? Let us know in the comments, on social media or on our forum HERE.