Home 2020 NOTHING HOLDING THEM DOWN – Country Spotlight: Australia 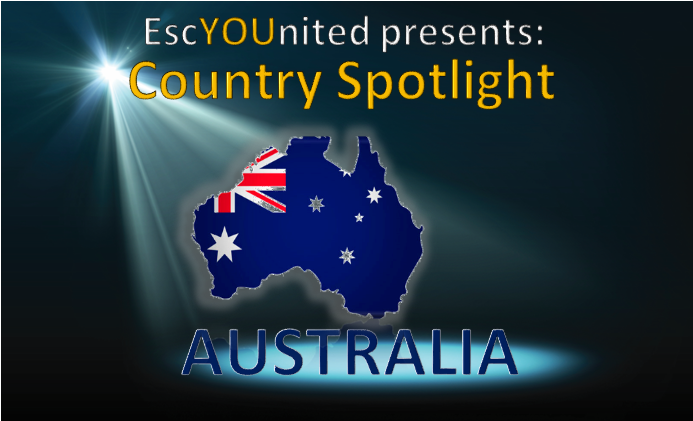 SURPRISE! You’d think you wouldn’t hear from me this soon, but ho-ho-ho have I got a treat for you. It’s the country with the best track record in the past decade. It’s the country that took Eurovision by storm in the first five years. It’s one of merely two countries to have a flawless qualification record. It’s the country furthest away from Europe but also the furthest country to be passionate about the contest. Solid since the eighties and beyond, it is AUSTRALIA!

But first, disclaimer time; this post is an editorial and therefore heavily prone towards subjectivity, as well as strong opinions and speculation. Anything stated beyond this point is the author’s personal opinion and does not necessarily represent the views of ESC United as a whole or its other editors.

NOTHING HOLDING THEM DOWN

You can be damn sure that the first thing you see when opening up this post is the brightest shining star on the Christmas Tree. How far Australia have come to BLESS us with Queen Kate.

However, that isn’t to say the newest addition to our ever-growing family had always been cherished. The fanbase seems to be very divided on Australia’s presence, with a large chunk loving them, considering them deserving of inclusion and deeming them of unfair, jealous hate, while others still question their presence and approach to the contest.

So is Australia really toxic of an influence? Mickeys wake up from your paranoid place, because your brains are spinning in and out of space. First and foremost, nobody in Europe really has a strong opinion on whether Australia participates or not (yours truly included). Like, pull your weight and people will like you. Don’t and you won’t be liked. It’s not that deep.

Secondly, Australia’s initial approach to Eurovision has been a bit… too aggressive in its ambition. Imagine if you, an outsider, are invited to a casual party and then come BARGING IN, wearing your best suit, demanding the best processo and amuse-geules and spend the rest of the evening bragging about that lucrative deal you closed, as the rest of the guests drunk-dance to “Barbie Girl”, a  mimosa in one hand and a slice of lukewarm pizza in the other. It may leave a good impression at first, but that rubs off pretty quickly.

It may be a far-fetched metaphor, but it does describe Australia’s trajectory in the song contest so far.   They really came in with their eyes on the prize, Violet.

As you may guess, this isn’t the best way to win the European audience over, because it appeared SBS had forgotten Eurovision is a pop culture phenomenon first and a competition second, and not the other way around. If you treat the Song Contest like something you participate in JUST with the sole objective to win as soon as possible, you quickly devolve into a one-dimensional overdog-like jury pet. Australia have forgotten that in order to win over fans you need to be fun.

Now, I do believe that SBS’s have made attempts and their selection of artists reflects this. Guy Sebastian and Dami Im were sterling choices, but unfortunately I don’t think the songs were all that great. I personally don’t care for “Tonight Again” because well, I could just turn on my radio at any station and hear a soundalike within say 20 minutes? Why would I look forward to hearing music at ESC that I already (involuntarily) listen to on a daily basis anyway? “Sound of Silence” suffered from the same pretty paint-by-numbers status, which sucked for Dami because had her song been even a tad special she easily would’ve won Eurovision.

Regardless, to finally dispel the illusion that Australia were ever “hated” by the casuals: Guy and Dami reached 5th and 4th in the televote respectively, which are amazing results for a country with no built-in fanbase outside the homeland. They were good and were rewarded for it.

Likewise, Isaiah and Jessica were not good, which is why they bombed the televote. It’s not that deep people. Again, they were inspired choices on paper, but…

Isaiah was on a collision course towards total disaster long before he choked on his own vocal chords – who on earth thought that a seventeen year old who had never been in a long-term relationship was the best person to sing a song about serial rejection and heartache? (One with the worst grammatical hook since Sanna Nielsen undid her sad in 2014).

Jessica Mauboy had an even worse experience, being forced to sing a song so bland and basic it was the musical equivalent of a rice wafer. SBS had hoped Sacha Jean-Baptiste’s name could hype “We Got Love”, but alas, SJB was so busy annointing Eleni Foureira as Lady-Saviour of Homosexuals Everywhere, she didn’t even cue Jess in about the staging plan before they had both flown over to Lisbon for rehearsals. Whoops.

In summary, Australia had a promising start nobody complained about, and then had two stinkers that did bafflingly well with the juries, (because the only way to properly judge music is via a checklist, I guess) and very poorly with that jealous audience.

Fortunately, after Jessica had flopped hard, SBS immediately took action to make their selections open and televised. I cannot shower SBS with enough praise for this decision: it provided Australia with a lifeline.

Now, I am not going to pretend like Australia Decides 2019 was this mind-blowingly awesome selection, the answer to all of their problems. It wasn’t. Last year’s Australia Decides was aight. But it accomplished two important things:

First, it shifted the focus from a production-decided entry to one where the audience had the largest say. This was an important change for reasons that don’t need further explanation.

Second, Aus’ Decides 2019 displayed a lot of variety in its acts, showing the diehard fans that Australia is capable of fun, while similtaneously gauging what type of entry an audience would like to go for. The audience and fans aren’t losing sleep over the Alfie Acuris or Mark Vincents of this world, but they are charmed to bits by the Sheppards, Courtney Acts and Zaachariaha Fieldings.

Australia Decides provides Australia with something they didn’t have before: a chance to win Eurovision as an equal. The overall quality of the selection doesn’t matter – although the upcoming edition already charmed my purple heart by including nillies treasure Vanessa Amorosi in the line-up – but SBS have handled last year’s season very cleverly. “Zero Gravity” was an act the audience loved (and a jury didn’t dislike), but had several problems upon its selection. Using critical analysis and constructive feedback, Australia managed to turn this rather awkward duckling into the one of the most showstopping, universally beloved entries of the decade, one everyone will remember for years.

SBS could easily devolve back into their previous hyper-competitive shenanigans (they are still refusing to be fun in JESC. In JESC!!!) and if they do, they will continue finishing in disappointing placements with no chance to attain the victory they obviously crave. Nobody roots for overcompetitive robots. Nobody roots for an overdog.

I have no doubts this new Australia will experience failure, including a first nonqualification, in the upcoming decade, but that’s a normal part of Eurovision everyone has to go through. You win some, you lose some. However, unburdened from their D.N.A. yoke, Australia now have a chance to pit themselves at the same level as the people whose votes they’re vying for. So:

Be hungry, be foolish, be flawed.

But above anything, have fun and be fun for others.

You’ve got it babe you’re more than enough. We’re NOT gonna live forever, so I wish you happy 2000 and whatever!!

Once Australia learn what it means to be a true part of the family, they will be rewarded with a win soon after.

Next up: We’ll take a country of miracle turnarounds and cutthroat mercenary behaviour. A country that always makes the most out of their very limited budget and could teach us some valuable lessons along the way.

AZERBAIJAN – A Wolf In Sheep’s Clothing
BELGIUM – Sometimes It Feels Like It’s Meant To Be Broken
BULGARIA – Brand New Old
CZECH REPUBLIC – Survival of the Hippest
NORWAY – the Northern Lights Are Dancing
POLAND – Anyone You Want To Be
SLOVENIA – Crouching Tigers, Hidden Treasures
SPAIN – Growing Spains

Do #YOU agree with Boris? Did #YOU enjoy this editorial? What do #YOU think of  Australia’s chances at the upcoming Eurovision? Let us know in the comments, on social media or on our forum!