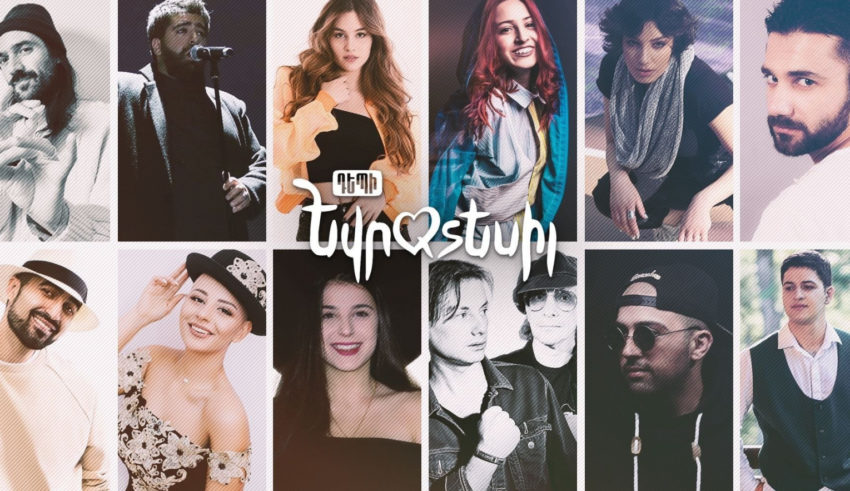 Armenia returned to its national final after one year off after internal selection Srbuk finished 16th in Semi-Final 2 at Eurovision 2019, failing to qualify for the Grand Final. The Depi Evratesil 2020 final will be held on Saturday, February 15, 2020.

The 12 acts named by ARMTV are as follows:

Keep an eye out of Depi Evratesil’s YouTube channel as all 12 songs will be released by ARMTV some time next week.

There are some notable names in this year’s Depi Evratesil, starting with the Greek born Armenian star Athena Manoukian. Manoukian is also no stranger to trying out for a Eurovision contest, as she came in 7th in Greece’s Junior Eurovision national final in 2008 with “To fili tis Afroditis,” coming in 7th.

The 25-year-old broke out as a star in Greece in 2011, with her single “Party like a freak” achieving gold sales status. In 2017, she also wrote “Palia mou Agape” for Eurovision 2005 winner Helena Paparizou. The rumor mill has consistently linked Manoukian to Eurovision over the years, and fans now have their wish as she gets to combat 11 other hopefuls.

Moscow-born Armenia singer Karina EVN, known for her distinctive bald appearance due to hair loss from alopecia (which she proudly decides to not cover up) and for several hip hop hits in Russia as both performer and writer.

The kid to adult EBU pipeline continues this year with Junior Eurovision 2010 winner Vladimir Arzumanyan, who won with “Mama,” joining Destiny Chunkenyere (2015 winner) from Malta in seeing if they can add the adult crown to their junior crown. Arzumanyan has released a couple of well received ballads this past year in Armenia.

Jetsetting hip hop artist Hayk Music, who has released songs in both Albania and Germany, returns home to Armenia to (presumably) add some rap to the national selection. Classical singer and violinist Arthur Aleq, in contrast, will presumably stick to form and dive into Armenia’s rich classical music heritage for his entry.

And other notable names are the Arutyunov brothers, who have both been finalists in The Voice of Russia (Sergey in Season 1 and Nikolay in Season 7).

Though Armenia have had wobbly form of late (two non-qualifications in a row), the Caucasus nation has typically enjoyed a high percentage of qualifications since their debut in 2006. Armenia’s best results to date are the 4th place finishes of Sirusho with “Qélé, Qélé” in 2008 and Aram MP3’s “Not Alone” in 2014.

What do #YOU think of the 12 acts selected for Depi Evratesil 2020? Do #YOU think any of these have the quality to get Armenia back to the Grand Final? Let us know in the comments below, in our forum, or on social media.

Fado legend Carlos do Carmo passes away at age 81