Home 2020 X Factor Malta: Where we stand prior to Judges’ Houses 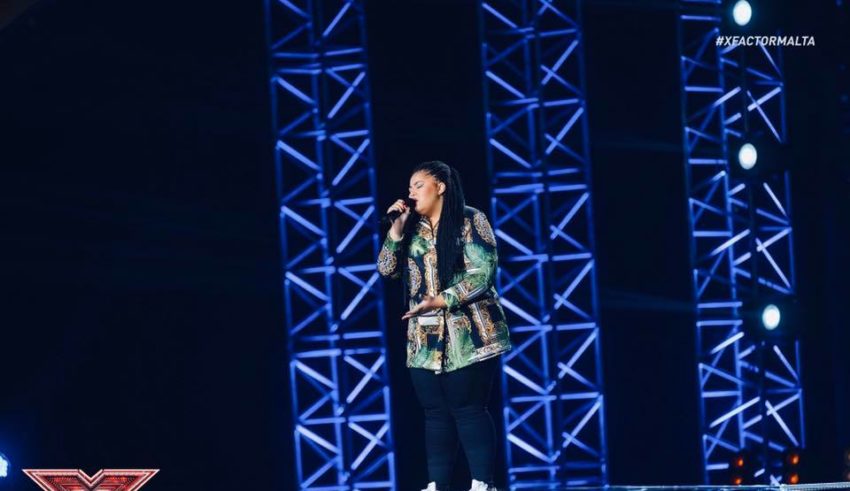 When singers possessed of self-confidence go onto a show like X Factor Malta, they believe that it is their fate to win and represent the Mediterranean nation at Eurovision 2020.

There’s another word for this “fate.” I can’t quite think of it. I think there’s a video game franchise with the same name? Also a girl band in the ’90s and ’00s had this word in their name? It’ll come to me.

Now that the audition rounds, boot camps, and six chair challenges are done, and the 24 remaining contenders head into the Judges’ Houses rounds (to be aired on Sunday, December 22, 2019 and Sunday, December 29, 2019), where do we stand? Who is left and not a Junior Eurovision winner named Destiny? Let’s have a look.

This is the second season of X Factor Malta, and the second that will decide Malta’s entrant for Eurovision. Michela Pace won the first season and performed the internally commissioned song “Chameleon” at Eurovision 2019 in Tel Aviv, Israel. Destiny Chukunyere was one of Michela’s background singers in Tel Aviv.

“Chameleon” came in 8th in Semi-Final 2 and qualifying for the Grand Final, where she posted a respectable 14th place. However, “Chameleon” earned 87 of its 107 points from the Jury, with its 20 points meaning it was 22nd in the televote count.

Regardless, X Factor Malta was commissioned yet again by Malta’s Public Broadcasting Services (PBS) to pick the representative for Malta at Eurovision. The Maltese version of the Simon Cowell created X Factor franchise, shown on Television Malta, has the following judges for the following groups:

Boys – Ray Mercieca: Ray Mercieca is an experienced singer and songwriter from Malta, having fronted several bands including punk rock The Characters and the ska punk band The Rifffs.

Girls – Ira Losco: Do you really need me to tell you who Ira Losco is? She walks on water! And came in 2nd at Eurovision 2002 with “7th wonder“, which is Malta’s joint-best placing at Eurovision ever. Reality. And she came back in 2016 with “Walk on Water” and placed 12th, Malta’s 2nd best placing in the 2010s.

Overs (Over 25) – Alexandra Alden: The most controversial of the X Factor judges and the most blasted on social media due to her age (24), Alden is a singer songwriter with one successful album (Wild Honey) under her belt, though extensive knowledge of music having earned a Bachelor’s degree in Jazz at the Codarts University of the Arts in the Netherlands. Every Idol or X Factor franchise deliberately casts a fall person to take the heat for a hard choice, and Alden is X Factor Malta’s.

Groups – Howard Keith Debono: A Maltese music producer and the one occupying the Simon Cowell role on X Factor Malta, though without Cowell’s many piling controversies in the United States at the moment.

In the judges’ houses rounds, 12 of the 24 budding contestants will be eliminated. Let’s have a look at the contestants in each group and their performances thus far.

Matt Blxck: This will be Matt Blxck’s third tilt at Eurovision in a row – as well as trying out for X Factor Malta Season 1, he also came in 6th at Malta’s national selection for Eurovision with the Swedish penned “Call 2morrow” (Hi, Jonas!).

Kyle Cutajar: Another X Factor Malta Season 1 returnee, Cutajar was part of Systm12 which made it to the Judges’ House last year as a group. As a solo artist, he brought a tear to Alden’s eyes with his Season 2 performances a league above Season 1.

Kyle Cutajar you're ageing like fine wine 🍷🍷! From last year's participation in X Factor Malta to this performance, this young man certainly upped his game. BRAVO! 💪📹 Full Audition on https://youtu.be/sixxDszr3F4#XFactorMalta

Dav, Jr.: The acoustic guitar wielding crooner with a pompadour has certainly been influencing the sales of fainting couches given the reaction the ladies have been giving him. And if that sounded like an old fashioned comment it was, as Dav, Jr’s standing ovation to his Beatles’s cover brings to mind the Liverpool legends first coming to America on The Ed Sullivan Show in 1964.

Giovanni: Doing a judge’s song is more often than not a contestant’s undoing at shows like this, but Giovanni managed to impress with his performance of Ira Losco’s “7th Wonder.” But Giovanni was one of the rare contestants to pull it off on charisma alone despite a very odd Florida country take on it, even if the judges said he was not among the best vocalists.

Karl Schembri: Not to be confused with the Maltese journalist who famously reports from Gaza, Iraq, and Syria, this opera loving soccer player floored with his Andrea Bocelli cover in the last round.

Jurgen Volkov: Multi-instrumentalist talent Volkov (we’ve seen him break out the piano and guitar so far) impressed with a Queen medley in the last round.

Jasmine Abela: Abela has been forged in the fire of two Eurovision national selections. She tried out in 2016 with “Alive,” coming in 6th, and again in 2018 with “Supernovas,” coming in 7th. She will be hoping she is not middle of the pack again on her third attempt.

Gail Attard: Attard is yet another Season 1 returnee who has made more of an impact this time around. Born in 2001, Attard came in 2nd at Festival Melodija Maġika in 2016.

Marija Bellia: Her chair challenge performance is enough of a biography. Girl who looks like Daria doing an acoustic guitar take on Lady Gaga’s “Bad Romance” with an improv rap stating she deserves to be moved through is all that needs to be said.

Destiny Chukunyere: You likely already know, but Destiny is the winner of Junior Eurovision 2015 and former backing vocalist for the country at Eurovision. She also came in 6th place in the semi-final when she competed on Britain’s Got Talent back in 2017.

Karin Duff: Duff made to Season 1 of the Judges’ House, and we shall see if the distinctly red headed singer songwriter can make it further in Season 2.

Justine Shorfid: Debono said that Shorfid’s audition was “perfect.” An unusually large amount of press was devoted to Shorfid’s take on Kodaline’s “All I Want,” and Losco said she is definitely an X Factor.

Edward Abdilla: Abdilla has the heart wrenching story of the season – he only just began performing again two years after his mother died from cancer. A ukelele player, Abdilla has garnered a lot of social media interest for his story and his coming back from his period of grieving.

Celine Agius: Agius is another making a comeback from an enforced absence. This time, the judges thought she was lacking confidence due to bad responses from her early dalliances with YouTube covers, but it turns out she withdrew due to specific threats of harm and death. Agius said she only began performing again four months before X Factor, but with a distinctive voice she has sailed through thus far.

Chantal Catania: The platinum blonde Catania has infectious confidence, as evidenced with her cover of Joss Stone’s “You Lost Me.” Great voice, as Merceica himself pointed out when he asked her to sing a line in French after that performance. Stay tuned to the end of this video for the first of the controversies involving an Alden decision in the chair challenge.

Paul Cuschieri: Seven years ago, Cuschieri texted all and sundry to get himself out. This time, he’s going to want all and sundry on social media to keep him in. An architect and songwriter, Cuschieri brings stones to “Forests of White,” his original composition for the chair challenge.

By the way, the comment by Alden before the chair challenge about him being an architect is not a joke. He runs his own firm specializing in interior design of hotels in Malta.

Kersten Graham: This experienced blues-rock singer songwriter takes his first tilt at Eurovision at age 25, having already had some singles out and an extensive resume in touring.

Jozi: There’s one every season on these type of shows who, through no fault of their own, find themselves on the receiving end of a change.org petition to bring back the performer eliminated by them. This year, it’s Jozi, and the judge responsible is Alden. Seriously folks, regardless of the merits of the petition, get a life.

Bloodline: I recall a great Maltese death metal named Beheaded who had an album called “Ominous Bloodline.” This is not the same group, because obviously these groups are formed during boot camp. However, I am just going to listen to “Crowned with Repression” instead of their O’G3NE inspired take on Lady Gage’s “Poker Face” in the chair challenge.

Chord: Rhiannon Micallef from this talented “women of wonder” is related to Richard Micallef from Firelight, and she struck out on her for Malta’s national selection in 2018, coming in 11th with “Beyond Blue Horizons.” Miriana Conte tried out for X Factor Malta Season 1, and also Malta’s 2018 national selection. Both with songs written by Cyprian Cassar. And with Luana Gatt they have formed Chord. To some praise from the judges. Could a group emerge victorious this year? They certainly have the pedigree for it.

F.A.I.T.H.: They were only named after their chair challenge. If you have any insight as to where F.A.I.T.H. comes from (they are four girls named Chanel, Demi, Emma and Megan), drop us a line.

Reign: I suspect the judges want Malta to try for an O’G3NE entry as this is the second group who sing in the same manner, are in a trio, and look similar. Props to Reign for going into the chair challenge with “Sound of Silence,” the Simon & Garfunkel classic that makes you sound like a legend if you pull it off right. And yes, you may recognize Reign’s Chrissy Warrington from Season 1.

Sweet Chaos: They certainly have an appropriate name. They bring fun and energy and charisma, even if their performances as a newly formed group were wobbly. They work well together, and with practice they can iron out the individual wrinkles.

Yazmin & James: After Slovenia at Eurovision 2019, please don’t make singing couples a thing. Not sure if they are, but their intro to the chair challenge comes off as an awkward introduction confessional on 90 Day Fiance.

After the judges’ houses round and the 24 acts become 12, we will have four more rounds until we know who will represent Malta at Eurovision 2020.

We will check in in the New Year to see how things stand after the judges’ houses.

Who do #YOU rate as having the X Factor for Malta this year? Do #YOU think we should increase our coverage for countries like Malta and Israel who use talent show franchises like this to select their Eurovision contestants? Let us know in the comments below, on social media, or in our forum.