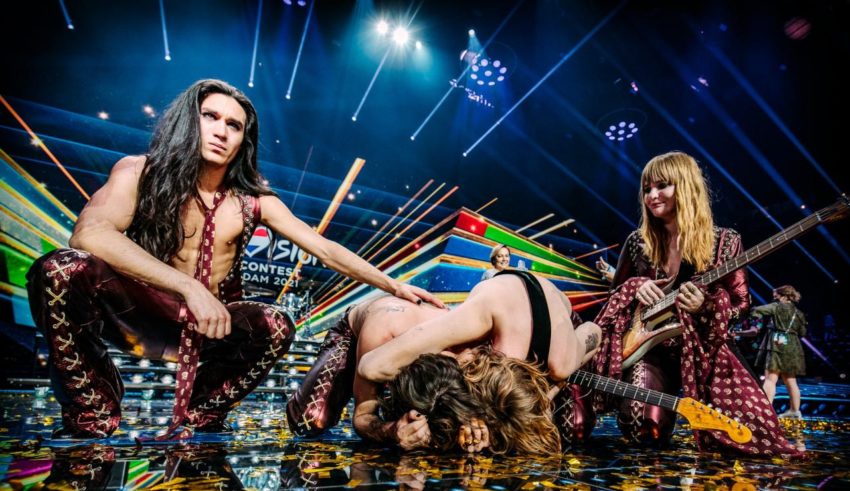 For Eurovision fans this summer, many have taken to refreshing the Billboard Hot 100 every Tuesday to see if Måneskin’s “Beggin'” and Duncan Laurence’s “Arcade” still remains on the chart.

And this week, the answer to both is yes as Måneskin’s “Beggin'” dropped slightly from its peak of 35 last week to Number 38 this week, remaining inside the all-important Top 40.

“Beggin'” has been part of Måneskin’s repertoire since they entered X Factor 2017 in Italy. The cover of one of the Four Season’s “Beggin'” received a standing ovation, and over the past couple of months each band member has mentioned that first performance as the moment the band had something special going.

Since Måneskin’s victory at Eurovision 2021 for Italy with “Zitti e Buoni,” it’s been a whirlwind summer for the band. The band already had a huge following on Tik Tok, which grew exponentially after the Grand Final in Rotterdam. Though they parted ways with their original manager in June 2021, they were picked up by Arista Records in the United States.

Arista’s Senior Vice President of Marketing Brian Vinikoor told Billboard today that “from the video creations and covers on TikTok, to a continuous flow of user generated content on YouTube, the music is finding new listeners each day and quickly converting them into fans of the band. It’s not just that people are discovering the music, it’s that they are engaging with the band, interested in learning their story, connecting with them on socials and continuing to dig deeper into the band’s music.”

Vinikoor also told Billboard that though “Beggin'” has exceeded expectations, the band is not resting on their laurels and anticipates new music being recorded soon.

Additionally, their marketing efforts are behind getting “I wanna be your Slave” more visibility and into the charts as well.

One person refusing to leave the Billboard Hot 100 is Duncan Laurence, with his Eurovision 2019 winning effort for The Netherlands, “Arcade,” now in its 16th week on the chart.

Today, “Arcade” crawled up slightly to Number 55, a slight rise from last week’s position 57 which was previously the song’s highest position on the chart.

To date, Duncan Laurence is only the 11th Eurovision participant whose Eurovision entry entered the Billboard Hot 100. His entry, at Number 55, is currently the 6th most successful, above The New Seekers’s “Beg, Steal, or Borrow” at Number 81 and Brotherhood of Man’s “Save Your Kisses for Me” at Number 27.