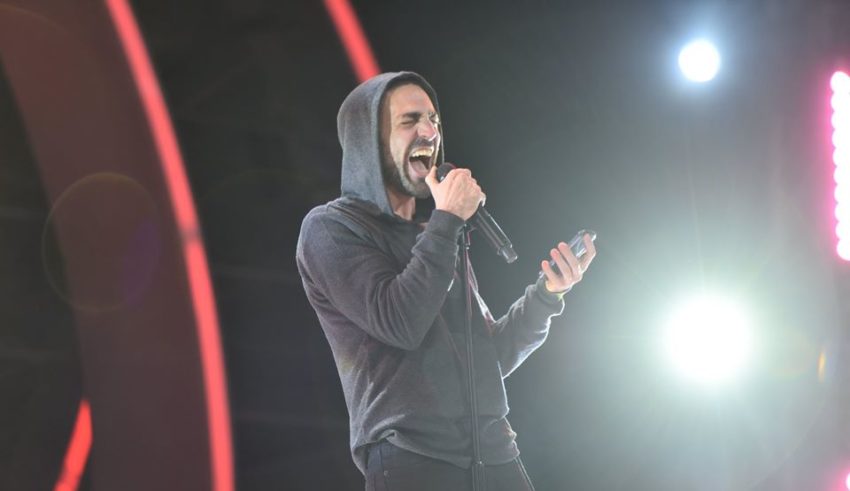 It was an intense live show of Georgian Idol, as Tornike Kipiani kept his cool during a stage invasion while performing a very eccentric take on Andrew Lloyd Webber’s “Gethsemane (I only want to say)”.

No matter, though, as Tornike received the most votes for the third week in the row and did not let the bearded stage invader who kissed Tornike on the cheek knock him off his stride. And that was not even the weird part of Tornike’s performance – while reading the lyrics off of his cell phone, Tornike was still able to deliver a passionate performance at the close of the song from Webber’s rock opera “Jesus Christ Superstar.”

At 24.05% of the vote for this Andrew Lloyd Webber themed episode, Tornike beat second placed Barbara Samkharadze by some margin (she earned 15.15%), with Queen Barbara proving to be Tornike’s most consistent competitor, coming in second for the second week in a row and never once dropping out of the Top Three in four elimination rounds.

Anri Guchmanidze, an early fan favorite due to his being a popular and talented X Factor winner, was sent home with 9.90% of the vote after his take on “Close Every Door” from Webber’s “Joseph & the Technicolor Dreamcoat” failed to impress.

Another surprise this week is that Tamar Kakalashvili dropped out of the Top Three for the first time, with young Mariam Gogiberidze pipping her into third. An outsider last week, Gogiberidze seemed to have taken notes of her critiques, particularly judge David Evgenidze’s comments on stage movement and presence. Gogiberidze, wearing a baby blue ball gown with black Doc Martens boots, announced herself as a serious contender with her performance of “I don’t know how to love him” from “Jesus Christ Superstar.” Evgenidze, who’d been impressed before by her voice, was sure to compliment her on her improvements, particularly the moment where she sat on the edge of the stage and sang straight to the jury.

Andrew Lloyd Webber co-composed the music for Jade Ewen’s “It’s my time,” the United Kingdom’s second best performance at Eurovision in the 21st Century, coming in 5th at Eurovision 2009. It was co-written with American multi-award winning composer Diane Warren.

The fourth round results are, with percentage of votes and songs embedded in the song title, as follows:

An additional moment of intensity came early in the broadcast, as all four judges held up signs demanding the release of political prisoner Dr. Vazha Gaprindashvili, “a well-known Georgian physician and president of the Association of Orthopedists and Traumatologists of Georgia, who was sentenced by the de facto authorities in Georgia’s South Ossetia region on November 15, 2019 to two months of pretrial detention,” for crossing the “border” to treat a patient in the Russia occupied territory. The official stance of the United States of America is the immediate release of Dr. Gaprindashvili, and as happens every season of Idol, a stark reminder that peace in the Caucasus is tenuous.

Hosted by Ruska Makashvili, Star of Georgia or Georgian Idol is the Caucasus nation’s version of the Idol franchise. It is the second straight year the show will serve as the selection method for Georgia’s representative and song at Eurovision 2020, to be held in May 2020 in Rotterdam, the Netherlands. After tonight, the remaining six will be eliminated one by one by viewer votes until the Grand Final.

What did #YOU think of Kipiani’s third win in a row? Does Gogiberidze impress #YOU as she climbs up in both the judges and televoters’ estimations? Let us know in the comments below, on social media, or in our forum.