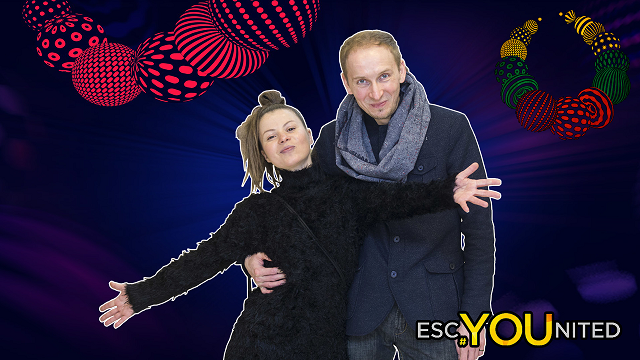 Calvin – 9 Points
With its futuristic synths, a horn line straight out of the 1970s, and vocals alternating between a screech and a whisper, this one’s really confusing…and I love it for its combination of nostalgia and creativity. The song isn’t afraid of piling on ideas and running with them proudly all at once. Inaccessible as it is, the chorus is genuinely catchy, especially “now I’m getting closer to you” as the horns swell. Though the lyrics may be a bit incoherent, the song being something no one else could have possibly thought of makes the incoherence of the lyrics fit. It’s for sure not everyone’s cup of tea, but I’m definitely on board.

Zack – 7 Points
The song is totally giving me a nice mix of 80s with the use of brass and distorted drumbeat.  The first bridge I feel brings things to a screeching halt, but it comes back on track at the chorus featuring a nice set of runs by Viktorija.  As expected, the lyrics come off as clunky, but I expect this of the Lithuanian entries in general.  But, Vikrorija is a quirky but charismatic singer, and I thoroughly enjoyed watching her sing.

Sean – 6 Points
This will more than likely be panned by a lot of people but underneath the harsh exterior this is a decent experimental take on a Eurovision song. It’s sure as hell catchy and comes alive in its energetic live performance, and will certainly stand out from the crowd. I wouldn’t write this one off as a Eurovision finalist in Kiev!

Ferdi – 6 Points
What can I say here? There’s nothing really special about the entry itself. The singer’s voice is impressive though, as was the staging in the national selection. As an entry, it doesn’t stand out though. I enjoy it, but it quickly fades away.

Stefan – 6 Points
Will this can go either way, I like it, but I don’t love it. Maybe it’s a bit too agresive, but we can all agree that we kinda expect something like that from Lithuania.

Robert – 4 Points
Ahhh, time for an insane one! Eurovision wouldn’t be the iconic contest it is without songs like this. Whether I like them or not, I am so glad that they exist! This, alas, falls into the less liked category. I’ll admit; I’m not actually too sure why I cannot get into this. Possibly it’s the singer who sings the verses in such a way that I didn’t think they were in English until I saw the text. Maybe it’s the lack of something which bursts into proper full on insanity. The beat is fun and overall it’s funky, but it feels almost half-baked in its craziness. It’s fallen into an unfortunate middle ground and I am just not feeling it, despite the fantastic ending. I could possibly end up changing my mind before May though…

David – 3 Points
We are out there now, when it kinda gets a little bit awkward for my taste. As much as I love getting something different to the contest, then not always will it work out on everyone. In this case, it doesn’t work on me, the song get’s quite loud and a bit obnoxious, to the point where I really don’t wish to listen to the song again. It’s always possible for me to change my mind of course, if I get used to a song, but I’m having a hard time with this one.

Nenad – 3 Points
At the beginning, this song sounds promising. But it ends up being irritating to me, Rocky and too sharp. I used to really enjoy the Lithuanian entries in past, marking their last 3 entries in mine top 10; but this thing ain’t working for me. I must admit that this thing may work in Kiev and she can win over the votes with a powerful performance.

Romeo – 2 Points
I struggle to understand what language this is in, I’m being told it’s English, but I’m not so sure. I think this is a hit or miss song. Some people may love this but most will not. I think it’s just a little messy and unpolished and I cannot see a way to fix that. I don’t think this will be in the final.

Matt – 2 Points
We had to endure 11 shows, let me repeat: Lithuania had 11 shows including 8 Heats, A Semi Final, a Online repechage and a Final……and this is what we ended up with. This is sooooo frustrating. I mean what it is this? If you expect an articulate and sophisticated review from me, think again cause I really have nothing to say but: This is a mess from the very first note until the bitter end. I am so tempted to give this the lowest score possible but due to vocals that are not horrible, I’ll give you an extra point, Lithuania. You’re very welcome!

Gerry – 2 Points
I can see what Fusedmarc was trying to go for with this avant-garde mix of funky trumpet synths, heavy electronic bass and powerful vocals. However, it just comes across as a mess. Viktorija’s voice is, by far, the best part of the song, but her diction could use some work, especially in the verse where it might be a bit difficult to figure out what she’s singing, exactly. The structure of the song is just all over the place, and the performance at the Lithuanian national final seemed a bit disconnected from the actual song.