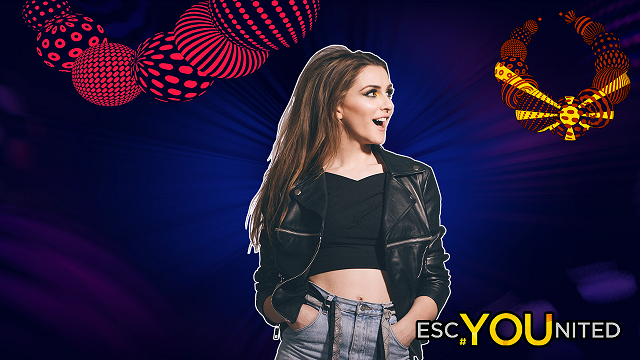 Zack – 10 Points
The instant the beat drop, I thought this was something that Swedish starlet Robyn could have recorded.  The song is current and trendy, yet stays aligned with what we would expect to hear at Eurovision by giving us drama and opportunities for audience participation (I guarantee the fan pit will be doing the chorus double-clap alongside the melody).  A move in the right direction for FYR Macedonia.

Ferdi – 9 Points
Wow! What a turnaround. From an opera ballad to an upbeat and modern synth-pop song! Jana’s voice sounds nice but the music is what’s doing it for me here. The choruses sound a little held back, perhaps a bit mysterious, and then comes the upbeat and extremely catchy chorus. A great entry, and hopefully a step towards better results for Macedonia

Nenad – 9 Points
There is something so catchy about this song that makes me want to listen to it again and again. With each listening, I personalize the song more and more – power of art? ‘Dance Alone’ is prove on how to make a ‘dated’ song very modern! If they keep the same art concept from the music video to stage in Kiev that thing couldeasily work. I want to say that I am a bit afraid how is she going to perform the song.

Romeo – 8 Points
This is a great song! Modern with a retro twist! This could be one to watch actually. I have no doubt in my mind that this will make the final. I think this will bring a great result for Macedonia. With the right staging I can see this doing very well!

Robert – 8 Points
When this first came out, I found myself really getting into the groove for it. It feels like a funky dance number and I think it’s one of my guilty pleasures of the year. The real highlight is the chorus which just hits a lot of buttons for me and is almost hypnotic the way it blends so well into the music. I think it’s one of the finest examples in the contest this year. Admittedly, the verses are a bit of a letdown as there’s not a lot of meat in them and they could do with spicing up somewhat I feel. This is also one of those entries where you think the staging could make or break it, so will be interesting to see how they manage it in Kiev

Stefan – 8 Points
I want to hear all those people who were against Jana now. 🙂 The song is awesome and I suppose that the stage performance will be also. My onliest and biggest concern is how she will sing it live, as in the video it’s a bit too much computerised.

Sean – 7 Points
Every year there’s one country who beats all expectations and comes up with the goods and it seems that this year’s surprise package is Macedonia! Although it’s plain to see that there have been Swedish influences (the Galantis-like shouts are a dead giveaway, this is a cool 80s retropop number that helps to perk up the year. Is it my thing? Not really, but I’m curious to see what this is like on stage more than most other entries.

Gerry – 7 Points
This song is one to watch out for. It’s got a great mix of retro and modern, which is a smart thing to do in this current cultural climate where nostalgia is king. The chorus is incredibly catchy, and the beat’s perfect to bop along to. With the right performance, this song might just become Macedonia’s highest-placing entry, ending the Balkan country’s dismal qualification record from the last ten years. Jana’s a talented singer who will likely bring this performance to life on the stage. One thing’s for sure: she won’t be dancing alone to this song in Kyiv.

Calvin – 6 Points
Some of the production elements in this are a bit overused, such as the distorted vocal in the song’s verses, and Jana’s performance lacks nuance, making the song’s emotional story somewhat basic. But it is quite catchy, contemporary, and will lend itself nicely to a live performance. There are some traits which separate this from other songs of its type well, such as the very fast, heavy, blink-or-you’ll-miss-it synth almost immediately before she begins singing. Overall, it’s an okay effort, if one that focuses too much on checking off trend boxes

David – 5 Points
Quite a rather slow dance track we are dealing with here. The party songs are always my thing at Eurovision, but for some reason, this one is not. The title is “Dance Alone”, and that’s a fitting title, cause the song seems very isolated and it doesn’t feel like it’s opening op. The song has potential, but I don’t feel it is executed the right way. Jana also has quite a techno sound to the song, and I think it’s un-charming, because I wanna hear her, and not something that could be a robot. Come on Jana, show yourself, some more!

Matt – 5 Points
Macedonia put forward a well-produced entry with a really nice beat. That being said, it fails to captivate or excite me. This is definitely something you expect to hear on the radio but to me that isn’t automatically a good thing, there are too many dull entries out there. But you can relax, I don’t consider this too bland, it has a good chorus and I have a feeling this is a grower and I had to give it a second listen to properly judge it. It just doesn’t have the spark I was looking for in a song but to me it’s not the kind of song I could or should dislike as it has a lot going for it.