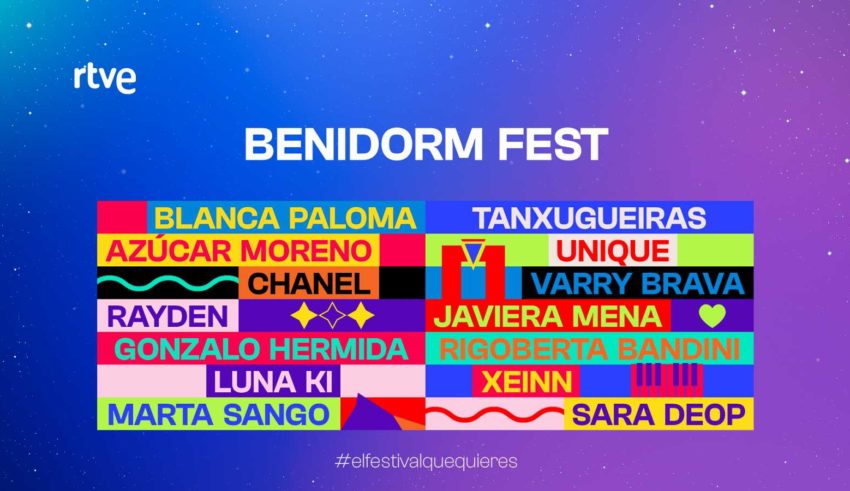 Spanish broadcaster RTVE revealed today in a press conference in  the acts that will compete in Benidorm Fest. Since this year, Benidorm Fest will be used as the selection method to select their representative for the Eurovision Song Contest 2022 in Turin. One of the following 14 acts will get the honour to fly the Spanish flag in the Grand Final on the 14th of May:

Familiar name in this line-up is Azucar Moreno. The duo represented Spain already in 1990 with the song “Bandido.” It ended on the 5th place with 96 points. Marta Sangó participated at Operacion Triunfo in 2018. The Spanish broadcaster were originally planned to have 12 acts in Benidorm Fest, but because of the quality and diversity of the submissions, the broadcaster decided to add 2 extra acts to the line-up.

The acts will compete in 2 semi-finals were in each semi 7 acts will perform their song. The four acts with the most vote from the professional (60% national experts and 40% international) and the public (50% televoting and 50% demoscopic jury) will proceed to the Grand Final. RTVE will release the songs on Thursday 23 December during an official press moment with the participating acts. However, acts can decide to publish their songs before tis date. Blanca Paloma and Javiera Mena’s song are already out on YouTube.

Which act are #YOU rooting for? Join the discussion on social media, in the comment section or on our forum HERE.