Home 2019 Serbia: Our reviews of the Beovizija entries – Semi-Final 1 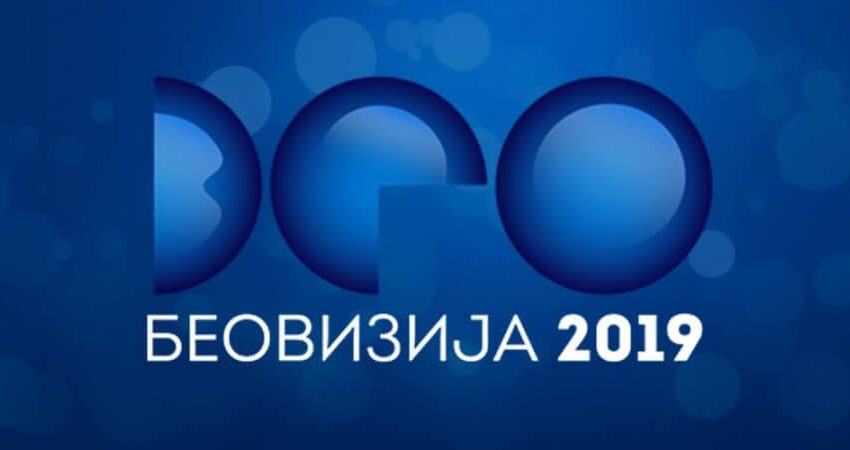 Tonight sees the second successive year of Beovizija kick off in Serbia, with twelve acts ready to take to the stage in the first semi-final of the competition. Which six acts should make it through to Sunday’s final? Myself and James took a look at the competing entries, so let’s find out who came out on top…

James – 6 – “The bass tone sounds a little too tinny, so the listener is already confused from the get-go where this song is going. You think it’s a more conventional funk song, then some electronic effects and someone who sounds like Right Said Fred’s Richard Fairbrass stumbling in. It’s confused, but it’s fun.”

Sean – 6 – “Wow, this is very retro. The Seinfeld guitar licks and simplistic percussion are perhaps a little basic for Eurovision but are still unique enough to make this funky track stand out in Tel Aviv. I’ll have to wait and see the performance to see if this is firmly tongue in cheek or a serious attempt at an ESC entry but it’s catchy and fun to say the least.”

James – 5 – “This is a 1990s sounding Eastern European smooth jazz composition with a few early 2010s flourishes (distorted backing vocals). It’s trying to bring traditional into modernity but sounds like it belongs in neither era. It’s got some great saxophone touches, but if you’d told me I was accidentally listening to Serbia’s entries from 2010 instead of 2019, with this one, I’d believe it. It’s out of time, and as a not-so-strong composition is out of mind after the song is over.”

Sean – 6 – “Aleksandra is bringing us a much needed ethno-pop ballad to Beovizija this year, and with a lack of entries like this in 2019 so far this could perhaps do well to stand out in the field. The jazzy elements that are sparsely interspersed in the song give this a relaxing, homely vibe and adds a sense of familiarity to this song. It could do with a few punchier moments to stand out, however.”

James – 5 – “Another dated sounding entry, this time a rocker. It starts off like a Bob Seger number then suddenly some guy starts shredding. It’s classic rock with a Balkan twist and I don’t hear any compelling reason for this to be in Eurovision. A common rock mistake most rock and metal bands attempting Eurovision make is that they exercise restraint when they should not. This entry sounds like they’re holding back. Non-metal fans’ first observation about metal is to comment on the skill level – play something that blows metalheads away, legions of non-metal fans will come onboard.”

Sean – 4 – “Dated Balkan rock is being offered up by Osvajaci, which in a strictly nostalgic sense reminds me of old Eurovision and makes me smile. But this is 2019, and a song like this just won’t cut it anymore. I struggle to find the interest for the full three minutes with this one, and think if this was chosen by Serbia, even the most dramatic performance would still see it be cut loose from the competing pack in Tel Aviv.”

James – 4 – “Is it called “7” because that’s how long, in minutes, this song feels? As much as I’ve complained the Serbian entries feel dated, as least they were trying something for originality and have some hooks. “7” is dated, like an early 2010s pop ballad, but also lacks anything distinctive. There is nothing here to draw me back, and it sounds like an inoffensive, meandering song that’d be on one of those Putamayo “World Music” CDs that were the rage at Starbucks in the late 2000s.”

Sean – 5 – “Again, nothing offered up here is refreshing or exciting to my ears. Dunja brings a pleasant pop song with very little change in tempo or direction and the three minute duration plods along nicely, but where’s the excitement? Tel Aviv’s contest is shaping up to be surprisingly low-key, so I don’t think another background piece is what Serbia needs.”

James – 1 – “Instead of doing 100, they should, as the English insult goes, “do one.” i.e. go away. I would say this was irredeemably dull, but the “na na na” over again on top of a riff that sounds like it comes from a bad game for the NES console knocks off a few points. I am not sure what Mr. Doo is attempting here or who this song is for, as it sounds like late ‘90s boy band on valium.”

Sean – 6 – “This is an odd blend of ethnic vibes, tame dubstep and a raspy, rocky vocal from Mr. Doo, and with a bit more of a beef up this could be a really interesting entry. As it is, this just sounds too much like a demo version that needs its audio cleaning up to really impress. With a professional lick of paint though this could be an intriguing prospect.”

James – 5 – “Forever the bridesmaid and never the bride as Saška has been to Eurovision as a back-up singer three times. Now it’s her time, and she’s fallen flat here. At the very least her entry sounds modern(ish). But being relatively contemporary, and her vocal performance, are all that stand out. As compositions go, it is not memorable. Instead of climaxing after the bridge, it fizzles. Maybe with a rework, some excitement or pizzazz could be injected into it, but as it stands, this makes me fall asleep.”

Sean – 7 – “This seems like one of the better overall packages I’ve encountered in Beovizija 2019 so far. Saska’s pop ballad peaks and troughs, but really comes to life in the last minute and lends itself to a suitably dramatic live performance. The question on vocals remains, but this could be this year’s token Balkan ballad with a twist, and wouldn’t be a bad decision for Serbia to make.”

James – 7 – “Ivan entirely carries this song. The backing track is a basic tamburica and some faux-clapping which may help with audience interaction. As a uniquely Balkan platform on which to base Ivan’s voice, this works. Is the song – vocals and instrumentation combined – strong enough to take on Eurovision? Probably not, though the choruses are at least memorable in both vocals and instrumentation after some middling verses.”

Sean – 5 – “I blinked and I missed this song, so obviously it doesn’t seem like a chore to listen to it. Ivan’s vocals are in the traditional Balkan style and would certainly impress in Tel Aviv, but the song itself is not nearly enough of a stand-out to show off his vocals and grab your attention. A missed opportunity to bring something with real power to Beovizija.”

James – 7 – “Is it me or does the intro and chorus sound like Michael Rice’s “Bigger Than Us”? Nonetheless, this is a decent pop banger and brings a bit of a pulse to an otherwise tame selection thus far. That being said, “Aritmija” needs some more power, which Perić herself is capable of. Also, the track itself needs some more power in a rework, but it has the base for a more powerful song that could stand out more.”

Sean – 6 – “At first I was excited to hear this one play out as it promised to be an upbeat pop banger, but unfortunately it peters out and is quite repetitive after a minute or so. A lot of the songs in Serbia’s selection seem to be suffering from the same problem, which is disappointing, but there’s enough bare bones here to salvage something with the right revamp.”

James – 8 – “This is another out of time Balkan ballad, but when basic Nena won’t do, you’ve got to bring extra. Vocals wise, Extra Nena gives a showcase of Balkan balladic pop just like she did at Eurovision 1992 with “Ljubim te pesmama” (13th place and Yugoslavia’s last official entry). These types of ballads, common in Eastern Europe, have their fans and detractors, but for those that love them, Extra Nena gives another masterclass. This won’t do the business at Eurovision, but fans appreciate one or two of these a year at the very least.”

Sean – 7 – “This is a promising ballad, and has all the right ingredients to soar in Tel Aviv. The build-up throughout the three minutes is well done, with the song building into a powerful crescendo that could allow Extra Nena to really pack a vocal punch on stage and with the right staging this could sweep up a decent spread of points in Israel.”

James – 2 – “Ah, a Balkan stab at hip hop circa 1998. This sounds like it’s currently in a demo state as the guitar and synthesizer sound too loud in the mix. There’s a clumsy, forced pause at the two-minute mark. There’s a lot wrong with this track, and unlike some others in this selection, it will take more than a polish to get it up to code for Eurovision.”

Sean – 7 – “I feel like this is one where the live performance will be key, as there is a lot of negative space with no vocals to cover. Will this have a memorable dance performance to go with it, or will the whole package look awkward on stage? Eleonora has that snarling Eastern European attitude, so let’s just hope she can bring it on the night.”

James – 7 – “Nenas are extra, Strings are wondrous, everything’s a bonus in Serbia this year. This is another “love it or leave it” Balkan ballad, though this one focuses more on the strings than Nena’s more vocal driven effort. For that reason, I have a preference for Nena’s ballad, but “Moja bol” will have its fans for being a touch more modern and for being more of an all-round package than Nena’s.”

Sean – 8 – “Now this is more like it! This has all of the drama and intrigue of some of the greatest Balkan ballads we’ve seen over the years and with the string element this could be a fascinating performance to behold. Ivana’s vocals need to be on point to carry this song, but if they are I think we’re looking at the Serbian entry for Tel Aviv!”

James – 2 – “Guess what? It sounds dated! This time like an early 2010s dance club banger. And there is rapping at the bridge, and it is terrible. There’s a stiffness to this, like the vocalist is at an awkward bar mitzvah for a kid from a mixed religious home, and the non-Jewish half are awful people putting a dampener on the occasion. I can’t think of anything positive to say other than it’s at least up-tempo.”

Sean – 5 – “I wasn’t expecting a rap break in this song! Unfortunately, for me it’s the only part of the song that makes me take an interest, otherwise it is another plodding tune that goes nowhere for me in this selection. Perhaps I can file this under the ‘comes to life on stage’ category like a few others here, but I can’t see it raising in my estimations much.”

Let’s see what this means for tonight’s semi-final…

It seems we had two favourites in particular, with Extra Nena and Wonder Strings & Ivana Vladović impressing. Will these two be among the qualifiers this evening? We don’t have long to wait to find out!