Home 2021 San Marino: Senhit’s entry to be revealed on the 23rd of February

Yesterday the social media team behind San Marino’s Eurovision entry teased us with an upcoming announcement. Soon never came so quick, because today we got the reveal date for Senhit’s Eurovision Entry! We will know which song she will perform at the Eurovision Song Contest 2021 on the 23rd of February. 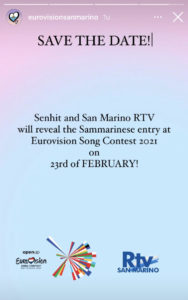 The reveal date was announced by a post on the Instagram Stories of their official Instagram account @eurovisionsanmarino. This wil be the second time that Senhit will represent San Marino at the contest. She already represented the micro-state in 2011 with the song “Stand By.” Sadly, she failed to qualify from her semi-final that year, placing 16th out of 19.

Can’t wait to hear Senhit’s entry for Eurovision 2021? Senhit also released her interpretation of the song “Alcohol is Free.” The song was originally presented by Koza Mostra feat. Agathōnas Iakovidīs for Greece at the Eurovision Song Contest in 2013. This release is part of her “Freaky trip to Rotterdam“, where she’s paying an homage to songs in the Eurovision history.

What do #YOU hope to see from Senhit and San Marino in Eurovision 2021? Share your thoughts with us on our forum HERE or join the discussion below and on social media!